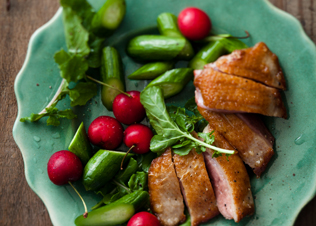 Despite being all but colonised by big poultry producers in the days of yore, KwaZulu-Natal’s beautiful Dargle Valley, is leading the way back to olde worlde farm-style fresh produce with the help of two special operations, Dargle Ducks and Croft Farm Chickens, winners of the paddock and free range categories of the 2012 Eat In DStv Food Network Produce Awards.

These are the sort of people you find in the yard with their birds. In fact, Durban-based landscaper Dean de Chazal, who traded in his lawnmower to raise ducks on the family’s Shayile Farm in 2007, jokes that he’s actually created a designer veggie garden for his ducks. Think broccoli, cauliflower, cabbage, radishes, gooseberries, plums and grapes in addition to standards like wheat, maize, sunflowers and soya.

“Usually, (outdoor) ducks can live for 2 000 days and more. We are slaughtering them after just 50 days, so we should make them as happy as possible. I have seen ducks in broiler houses; they sit down, eat, drink and sit down again. It really is horrible,” he points out. Apart from their gorgeous surrounds, these Dargle ducks also have access to the very thing that is most associated with ducks – water. To counter the risk of infections from dirty ponds, Dean came up with a new-age solution of overhead sprinklers for cooling off during the hotter summer months.

While it is extremely difficult to envisage a succulent duck a l’orange while cooing at fluffy little yellow ducklings, the hard fact is that a happy duck makes for a tasty duck. This is underscored by Hartford House chef Jackie Cameron and other local establishments who have long supported Dargle Ducks.

Surprisingly enough, however, Dean says South Africans know very little about this bird. “A lot of people say they don’t eat duck, but when they taste it, are surprised. We realised that we had to get people to do just that. It has been wonderful. I’ve even managed to convert a few vegetarians!” he laughs.

His cooking kit, which comes into its own at various farmers’ markets and festivals, comprises a large drum that has been sliced in two with a space for a fire and room to cook between 10 and 15 ducks. The mother and son team also do duck egg and breast rolls, duck confit and frozen ducks. Although he prefers his duck as is, with the skin crisped under the grill just before serving, Dean says most fruits – including mango, lemons, oranges and even grapes – perfectly complement duck.

City slickers Chris and Kandy Slater of Croft Chickens arrived in the Dargle Valley in June 2008 and were producing chickens by October that year. Given that Chris knew nothing about chickens and a lot about manufacturing when he first arrived, the connection he felt when he saw the property must have been enormous. “We drove in, looked at it and said that it just felt right. The property came with the chicken business so we decided to make a go of it. I suppose we literally fell into it,” laughs Chris.

So where did he start? “I soon realised that farm people are amazing. A lot of people helped us with information and advice,” he remembers, adding that Kandy’s accounting and administration skills and a lot of time spent on the internet completed the package.

Unlike its big brothers in the poultry sector, Croft Chickens doesn’t dose its birds with routine antibiotics or growth stimulants. Good exercise, foraging and plenty of fresh air keep them healthy. Chickens that appear a little off colour get the sort of thing a new-age gym bunny would expect – a stress pack comprising multi-vitamins.

At between 1.5 and 1.6 kg, they are also far bigger than your average supermarket bird, which weighs in at around 1.2kg. Coming in at seven birds per square metre (which is well below the stipulated 10 birds per square metre to qualify as free-range) these chickens serve a niche market comprising restaurants, small coffee shops and households. Prices might be higher, but the proof is in the tasting, and Chris and Kandy say that the new customers who complain most about higher prices are usually the first to return.

The Slaters, who do enjoy eating their own chickens, say customers’ comments back up their own observations, that their chickens have more taste and far less fat, but remain juicy and tender. Muscle tone is what provides the flavour.

In between converting ramshackle sheds to hen houses and building new ones, the Slaters have added Speckled Hen free-range eggs to their brood, and have extended the butchery that provides the delicious value-added products for which they are known.

“We process about 1 000 chickens a week. That’s whole chicken, spatches and specialised products,” explains Kandy. The extensive product list includes both whole and whole stuffed chickens (in varieties such as herbs, sundried tomato, olives and feta, spinach and feta and bacon and feta), baby and whole spatchcocks with a range of marinades (peri peri, lemon and herb, Portuguese wine and garlic, barbeque, Indian curry and Italian mint), kebabs and espatada. The boneless spatchcocks, which cook quickly on the braai and can simply be sliced and served, and deboned and stuffed thighs and drums, come in flavours like sundried tomato and olives, spinach and feta, bacon and feta and bacon and prune.