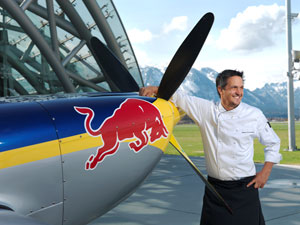 Hangar-7 at Salzburg Airport in Austria is a private airport hangar owned by Red Bull. Housed inside this glass dome is a collection of historic and contemporary planes, helicopters, motorbikes and Formula 1 racing cars.

There’s also the slick and shiny restaurant, Ikarus, founded by legendary German chef Eckart Witzigmann, where each month of the year a different international chef takes up residence.

What is the concept behind Ikarus?
Each month, a different chef creates the culinary concept for the Ikarus kitchen. First, the head chef Roland Trettel, came to Rust en Vrede, with a camera crew in tow and we spent a few days in the kitchen planning the menu.

Then, my sous chef and I caught a plane to Salzburg. As soon as we hit the ground, we were off – in the kitchen cooking, doing interviews. They are so switched on. It was an incredible opportunity and a privilege.

Tell us about the architecture of the restaurant.
It’s a glass dome literally located on the side of the runway at Salzburg Airport. From the outside, Hangar-7 is shaped like a wing.

Not only does the chef change every month, but there’s also a monthly art exhibition featuring a top artist.

Are you a fan of aircraft?
I don’t fly well, but I am a petrolhead, and being around all those motorbikes was a real treat.

What inspired your menu?
We created two seven-course menus, and there’s also an a la carte Ikarus menu. Diners are allowed to mix and match from all three menus, which can get quite challenging.

As for what inspired the menu, the day Roland came to Rust en Vrede he wasn’t supposed to eat. He had just flown in and we had both assumed he’d be tired so we planned his menu for the next day. He ended up eating at the restaurant that first night, and he really liked what he got, so the final menu was actually planned around that first night.

He was really impressed by what we could produce with such a small kitchen team. On any given night there’ll be five staff in the kitchen at Rust en Vrede, whereas in Europe the teams are massive and super-qualified. Here the pool of qualified chefs is a lot smaller.

Any highlights?
The kitchen team really stood out for me. The core team of 25 German chefs never changes, only the guest chef does, so every month they have to get used to a new system and person in charge. They were such genuine people, and so down to earth.

Another highlight was meeting Eckart; he was the first chef in Germany to achieve three Michelin stars! One day he tapped me on my shoulder and said, ‘I really like your food’. That was really cool, he’s a real gentleman.