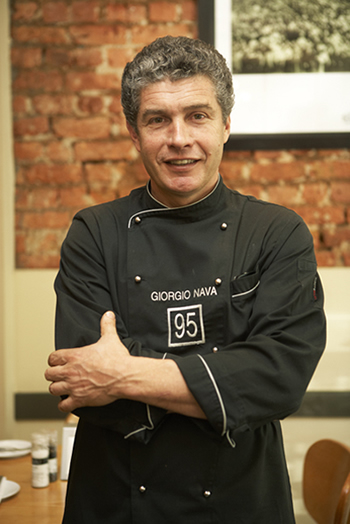 Giorgio Nava, chef and owner of the esteemed Carne SA.

Giorgio Nava, chef and owner of the esteemed Carne SA (winner of Eat Out’s Best Steakhouse for 2013) has opened a second, smaller Carne on Kloof Street to supply growing demand for his excellent, meaty fare. Jeanne Calitz went to have a bite.

As a smaller version of the Keerom Street restaurant, Carne on Kloof features a suitably trimmed-down menu. As the name indicates, there’s a great range of meaty fare available, from (excellent) beef carpaccio and veal sweetbreads on the antipasti menu to a variety of steak cuts as mains. Besides the well-known cuts like sirloin or T-bone, there’s also the choice of hanger steak and free-range pork sirloin on the bone.

Taste-wise, the hanger steak falls somewhere between the fillet and the sirloin: it has more flavour than the former, but is less chewy than the latter. A lean cut, it was well-served by the addition of their house salad, a fresh and crunchy toss of lettuce, radicchio, diced red onions and cucumber. (Steak and salad – a Noakes-worthy meal, yes?) Delivered perfectly medium-rare, it’s a very tasty piece of meat that has my husband looking on longingly from his choice of a beef hamburger.

Despite the meat-heavy menu, any lost or accidentally invited vegetarians (it’s called Carne, don’t you know) will also find a few options to sink their teeth into: the classic L’insalata Caprese boasts a great scoop of deliciously creamy burrata on diced tomato; there’s an adventurous avocado salad with fresh pear and pecan nuts; and three meat-free pasta options, including a tempting butternut ravioli with sage butter.

When it comes to dolce (and it always does, for this diner), there’s the choice of homemade sorbets, gelato, tiramisu and chocolate fondant. The fondant is delicious; rich and decadent, this sophisticated little confection ticks all the boxes. We round the meal off with a neat espresso.

Walking away, it’s easy to see why Carne on Kloof is, after barely a week’s business, already drawing full crowds of locals, as well as the occasional visiting celebrity (like a certain likeable CIA-boss from Homeland).

The wine list is small but it’s adjusted on a daily basis to allow for variety. You’ll find a few easy-drinking selections as well as some more serious wines, like the impressive Felicité Pinot Noir from Newton Johnson. They also have a smart bar that showcases a range of spirits and some bubbles not listed on the menu.

Service is not super slick yet, with a couple of order slip-ups here and there, but then they’ve only been open a week or so, so let’s not sweat the small stuff. Besides, the staff are friendly and extremely attentive. Special mention goes to the charming and informed hosts/floor managers, who really go the extra mile.

Overall, the feel is elegant and classy, but very relaxed. With a combination of face-brick and steel-grey walls, light wooded furniture and steel beams, the venue has an industrial feel; nevertheless, it exudes warmth – especially if you stumble in, freshly drenched by one of Cape Town’s torrential rains. One off-note is the cushioned benches that are set quite high, leaving you positively looming over the table. Staff members are aware of this tricky detail, though. The walls are strikingly adorned with yellow wood troughs, tribal antiques from the Eastern Cape that Giorgio bought at an auction.

Have a drink at the sophisticated bar before dinner. The fairy-light-lit terrace is home to a couple of tables that will no doubt be snapped up on starry nights.

Have you been to the new Carne? Let us know by writing a quick review.