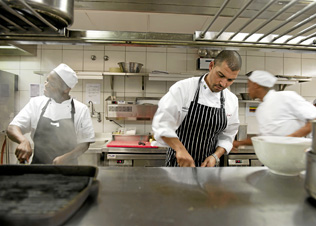 It is commonplace that restaurants in city hotels struggle to be profitable. Back in the day, if you were in the rich class, the restaurant in the swanky hotel was where your parents were most likely to take you for formal celebrations.

But times have changed. In some parts of the world, there is even a stigma attached to hotel dining rooms. Luxuriously fitted “five-star” restaurants now abound as sole businesses.

Among several challenges in-house restaurants face is that, with the exception of breakfast, hotel guests prefer to go out and see the town.

On the other hand, the general public don’t feel welcome — security at the main gate wants to know what business you have on the premises.

Such difficulties have led to hotels trying to upgrade their restaurant profiles, to co-brand with well-known restaurant chains or create separate restaurant identities — the Bombay Brasserie at the Taj, Tobago’s at the Radisson and the Planet at the Mount Nelson.

Another vogue, and the one Sol Kerzner chose for his One & Only hotel in the V&A Waterfront, is to go with celebrity chefs — in that case, Nobu Matsuhisa and Gordon Ramsay. But not even Ramsay’s name could attract enough support to the One & Only’s Maze experiment. After every gourmand in town had been once, the clientele dried up and, as everyone should know in Cape Town, the off-season is far longer than the tourist season.

It’s been a great few years for Riffel, who is in his mid-30s. He has collected the requisite accolades of chef of the year and restaurant of the year. Of late, he has been extensively featured and vaunted in newspapers and magazines and on local television programmes. He has cooked with Martha Stewart and on NBC in the United States.

At the One & Only, the name Reuben’s is now embossed on the tables. Not much else has been done to the decor, but the atmosphere has been transformed since Ramsay’s time. It is convivial, friendly, upfront and down-to-earth. Portions are generous too.

The salted squid tentacles is a hit — crumbed and deep fried, served with English mint, sweet chilli sauce that gives a little heat, and half a lime to squeeze over it.

The peppered springbok steak was perfectly caramelised on the outside yet medium rare inside; the potatoes were a bit glassy and undercooked, but far from inedible.

Finally, a lekker local take for dessert — a round “peppermint crisp”, with shards of chocolate, hazelnut praline centre and a miniature jug of rich hot-chocolate sauce.

Reuben’s is one restaurant that deserves a public well beyond the hotel guests.