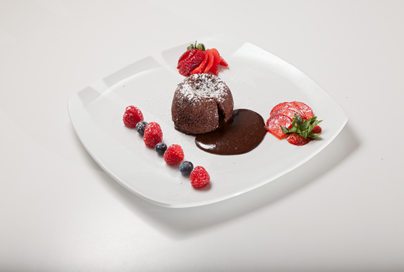 In the first instalment of our signature dish series, we feature Giorgio Nava’s chocolate fondant, available at his Cape Town restaurants 95 Keerom and Carne SA (winner of the 2013 Eat Out Restaurant Award for Best Steakhouse).

The dish: Chocolate fondant at 95 Keerom and Carne SA.

Described by Giorgio as ‘decadent’, this fondant has a beautiful chocolatey crust with a liquid centre. It’s definitely too good to share. One customer reportedly told Giorgio that it was better than sex, and people from other restaurants have tried to bribe his staff for the recipe.

Just before 1995, Giorgio was working at Nobu in New York, where they had chocolate fondant on the menu. With the Nobu fondant in mind, he developed his own bigger version using a different kind of chocolate, thus putting his mark on the dessert.

Ice cream, strawberries or both.

The chocolate used in the fondant is imported from Italy.

Why it’s important to order it, according to Eat Out online editor Katharine Jacobs:

“Unlike many imposter chocolate fondants, this one is gloriously liquid in the centre with a beautiful crusty exterior. It’s made with excellent quality chocolate; the smell is something else. You should eat it in order to calibrate yourself for future chocolate fondant grading.”

Which are your all-time favourite restaurant dishes? Nominate them in the comments.