Flavoursome, home-cooked, Cape Malay-style fare is what keeps patrons coming back to D6 District Six Eatery, and also what has led regulars to call this Emmarentia eatery their ‘second home’. Zodwa Kumalo-Valentine reviews. 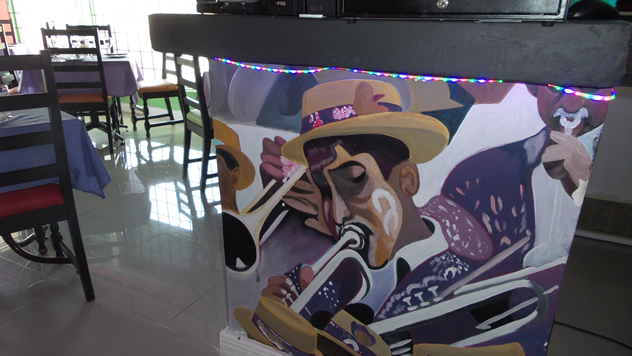 A mural of the Cape Coons at the D6 District Six Cafe in Emmarentia. Photo courtesy of the restaurant.

Creating mildly hot yet rich, spicy curries is the main preoccupation of chef-owner and waiter, Grace Fourie, who has tweaked and personalised each of the dishes to perfection. As a result, the lamb curry (served with two generous bowls of steaming rice) is fall-off-the-bone tender – little wonder it’s the most popular dish here. It is accompanied by sambals that include a sweet-and-sour sauce, a refreshing cucumber salad, and beetroot – to offset and complement the rich flavours of the lamb. Other specialities include waterblommetjie bredie (a seasonal offering containing lamb, apple and potatoes) and bobotie served in very generous quantities. There’s also a tripe curry, sourced (as a favour) by Famous Brands specially for the restaurant. Only if you’re ordering the main meal to share – or already have plans to enjoy leftovers later – should you order the flavoursome Malay samoosas as a starter, or you’ll be too full to enjoy dessert, which would be a great pity. Grace’s melktert and warm, freshly made koeksusters – or KU Sisters, as they’re known – (two per serving) are both legendary after-dinner treats. Also highly recommended for pud are the pumpkin fritters (two per serving); the recipe for which was published by a national newspaper and has since been clipped out and mounted on the brightly painted walls as a talking point. 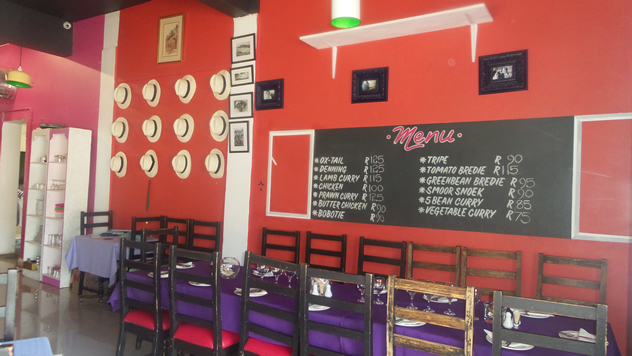 A view of the menu on the wall at the D6 District Six Cafe in Emmarentia. Photo courtesy of the restaurant.

While the wine list has a rather limited line-up, it does feature several choice wines, including Arabella, Wolftrap, Welgemoed and Porcupine Ridge. Beers and spirits are also on offer.

Grace’s warmth and friendly service, and the obvious pride in what she serves, makes you feel like you could be breaking bread at your aunt’s house. The restaurant is small, limited to around 10 tables, so service is efficient and enjoyable. 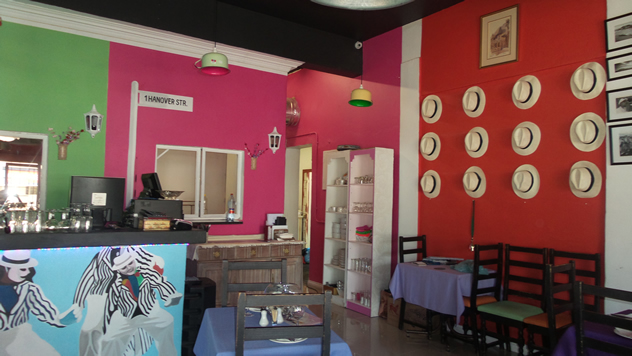 Hats are part of the decor at the D6 District Six Cafe in Emmarentia. Photo courtesy of the restaurant.

District Six is an authentic homage to the Cape Malay aesthetic. The décor is colourful and festive, with a vibrant palette of lime green and orange. The walls are decorated with various things, including panama hats, framed family photographs and glitzy Cape Carnival costumes.

No oil is used in the preparation of the curries. Rather, a slow-cooking method is the order of the day, which makes for healthier eating as well as more tender meat, and also brings out the full flavour of both the meat and the spices used.

Have you been to D6 District Six Eatery in Emmarentia? Let us know what you thought of the experience by writing a review. 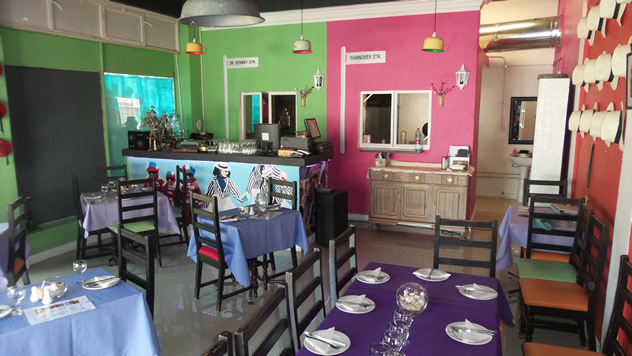 A view of the counter at the D6 District Six Cafe in Emmarentia. Photo courtesy of the restaurant.