Eat this now: The eisbein at Im Eimer in Somerset West

“Are you okay?” asks one of my dining companions.

In front of me is a vast piece of meat, encased in shining crackling. I’d say it’s roughly the size of two egg boxes, placed on top of each other.

We’re at Im Eimer, a German restaurant in Somerset West that opened in 2011 and has been expanding piece by rickety piece over the Hucke family’s smallholding ever since. The Hucke family has owned the property since 1994. “We give credit to Mr Detlev Hucke for his vision and mission to create a family-run German restaurant and beer garden that caters for all,” explains Andrea, a member of the clan.

The thing to order here is eisbein, the traditional German pickled ham hock. There is not one, but three different eisbein dishes on the menu. Between them, over 400 portions are sold per week. And they are all immense. We’ve ordered the requisite four hours ahead of time, and are thus eating the robust-sounding Bayerische Schweinshaxe – the version with crispy skin. 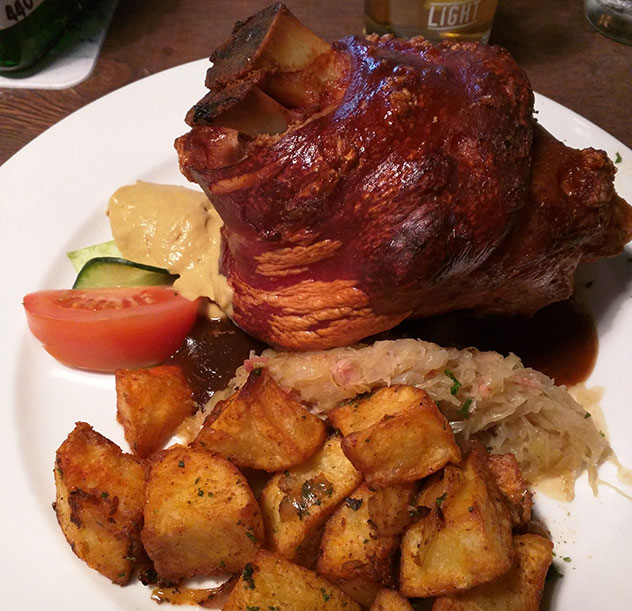 “You have to take hold of the two bones,” explains another fellow diner, helpfully. “And pull them apart.” The crackling shatters, and the bones fall open to reveal tender flesh. Thus granted entry, I bid farewell to my fellow diners.

Beneath the crispy crackling, the meat is beautifully succulent, and salty, sour and sweet all in one go. Mustard and sauerkraut do an excellent job of cutting the richness – it’s a naturally fatty cut – but nevertheless, when I surface some twenty minutes later, I’ve managed to consume only about a third of the piece of meat. To be fair, I have expended some energy on the accompanying sautéed potatoes. (Mash or twisting pieces of spaetzle, a German pasta, are the other options – both also great.)

Thankfully, Im Eimer offers doggy bags, which we unanimously request. The following day, my partner enjoys eisbein again, with a home-made crisp green-apple salad. And then again the very next day, for lunch. At R89 (for any of the three eisbein options), it’s pretty incredible value for three meals. And winter is most definitely the season.

Im Eimer is famous for its vast list of schnitzels (the owners say it’s the largest variety in the Western Cape, and I am disinclined to argue) and apfelstrudel (presumably eaten by people who order something smaller than the eisbein).