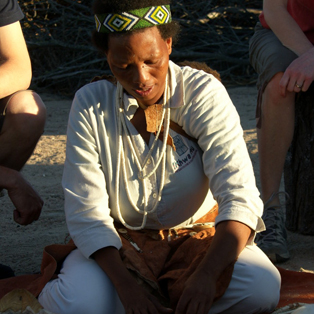 ‘In South Africa, we use the term San rather than Bushmen. However, Botswana’s Bushmen still prefer that name,” my Mail & Guardian style guide advises me. The San then is a relatively neutral term for a range of many hunter-gatherer, first-nation peoples such as the !Xóõ and Ju’hoansi.

The San have had many enemies. Merely recounting the injustices they have suffered and the pogroms unleashed on them risks dehumanising them still further. Their ancestral lands in Namibia and Angola have been ravaged by wars; in South Africa and Botswana by multinationals and farmers. Some groups still find themselves up against gigantic mining corporations. Their history is not generally disputed, but what is controversial is what ought to be done about it.

Even “friends” such as the San have had makes one wonder: Who needs enemies? Dreamy mytho­maniacs such as Laurens van der Post romanticised and nearly patronised them out of existence. For almost 30 years, the South African Defence Force offered (or compelled, depending on circumstances) the !Xun and Khwe jobs, education and protection.

Nobody, including the San, thought to ask what might happen if they lost the war. More recently, some tourist facilities have become veritable human zoos.

There are currently about 100 000 people in Southern Africa who count themselves as San, and only about 6 700 live in South Africa. Throughout the region they still suffer racial prejudice and social and economic marginalisation.

!Khwa ttu, a San culture centre 70km north of Cape Town, just off the R27, is an initiative of the Working Group of Indigenous Minorities in Southern Africa and a Swiss philanthropic foundation. !Khwa ttu is in the ancestral lands of the Xam and means “water pan”.

Its intention is “to restore and display San heritage, culture, folklore, visual arts, cosmology and languages; to educate the general public about the world of the San; and to provide training to the San in literacy, entrepreneurship, tourism, health issues, community development, craft production, marketing and gender awareness”.

I’m not sure what to expect as Munchkin and I drive up the track to !Khwa ttu. We are in luck.

There are several majestic eland, their shapes redolent of cave paintings, ruminating near the road, followed by a group of alert ostriches. There is a restaurant next to a crafts and bookshop in a renovated old farmhouse, which is open for breakfast and lunch.

It isn’t what I imagined at all — it is a smart, 60-seater dining area. Stone walls, wine racks, wire-and-paper “trophy” heads of antelope lit from the inside on the walls, and a roaring fireplace.

For novelty, the winelist is written on a large green wine bottle. Mark-ups are sensible and there is an adequate selection of wines, many from the region.

The menu is in multicoloured chalk on several blackboards and the prices are reasonable (breakfasts about R40, starters R36 to R48, main courses R68 to R95 and desserts R32). But when the food arrives it is clear that the kitchen is equipped with a professional chef.

The springbok carpaccio, served with a poppadum, is a healthy portion of not very thin slices (for carpaccio), fresh and deep madder in colour, with a few dots of balsamic syrup on the plate and served with pawpaw, which ideally could have been riper.

The eland pâté isn’t the buttery affair we are accustomed to with duck but is crumbly and resists being spread on the large slices of freshly baked pot bread. It is accompanied by a ramekin of snakeberry chilli jam, which has a mild bite.

After lunch, our trainee waiter, André, from the Khomani community of the southern Kalahari, shows me one of these growing next to the restaurant. He tells me birds like to nest in them because the thorns protect them — and, sure enough, there is a small nest inside.

For mains there are the usual South African favourites, such as lemon chicken and beef fillet with green-peppercorn sauce. For vegetarians there is couscous with butternut, feta and aubergine.

I have the springbok — a pie, piping hot in a crispy pastry, which is tastily blackened in places by the oven, on top of a light mash with carrots and whole green beans.

Munchkin has the eland bobotie, which is lean and airy, with a cumin fragrance and a thin egg topping, served with plain white rice.

For dessert, I have the pecan-nut tart, which is not particularly nutty but rich and jammy, with a drizzle of honey and vanilla icecream.

I can wholeheartedly recommend the restaurant and, while you are there, take in some of the many activities the centre, which has accommodation, has to offer — campfire dinners, sundowner drives and tours that include tracking animals, identifying plants, sharing stories and learning words in the San languages.