Friday, October 7th, 2016 by Eat Out with Greg Landman

Brought to you by SAB

Eat Out and SAB are on a quest to find the best pub lunch in the Eastern and Western Cape. Over the coming months, some of the Cape’s favourite pubs, bars and grills will be taking part in the #BESTPUBLUNCH campaign. They’ll each be offering a pub lunch and draught beer special as their entry – but it’s down to you to pick the winners by casting your vote here: bestpublunch.co.za. 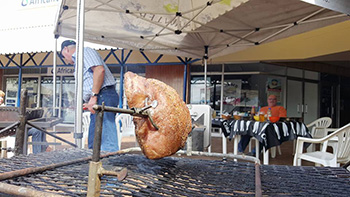 Meat on the spit at Lord Montague in Montague Gardens. Photo supplied.

We’ll be announcing the winner each week on Eat Out, and sending our own critic to report back. This week’s winner is Lord Montague Pub and Restaurant in Montague Gardens, whose excellent value deal of hearty mains for R55 runs from 12pm till 3pm Monday to Saturday. Options include a half portion of chicken schnitzel with chips and a sauce of your choice; bangers and mash with gravy and a baked onion; beef burger and chips; lamb liver and mash; and a calamari basket. There’s also a soup of the day with bread for R35. Order a Castle draught for R26. 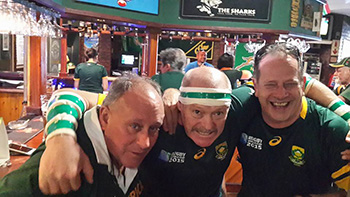 The pub is a popular spot to catch a game. Photo supplied.

This is typical stick-to-the-ribs pub fare, with no attempt at being healthy. It offers very good value with generous portions. We can confirm that the bangers and mash are delicious – a liberal portion, with sausages that aren’t floury but full of meat, smothered in rich onion gravy. The beef burger is man-sized with very good chips.

While the interior is rather dark, the bar is the centre of the pub with a raised section all around with banquettes. It’s popular with local businesses for lunch and drinks after work, and has regular devotees at night. Service is good and friendly; the staff are very much in touch with customers.

Do you have a favourite local pub? Rate them on bestpublunch.co.za and you could win Uber vouchers.