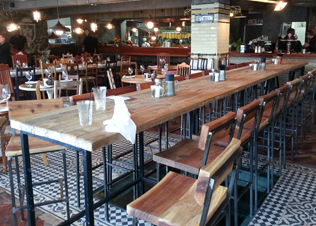 The tapas menu is what everyone will be talking about they’ve been to La Parada. Spanish chefs produce calamari tubes with fresh salsa verde for soaking up with crusty bread, luscious and fragrantly spiced oxtail ravioli with crisp potato topping, and patatas bravas (squares of fried potato in a vivid tomato sauce). The paprika-spinkled octopus, served on a bed of sliced potato, tastes much better than it looks. Croquettes (in prawn and ham versions) are everything you dreamed: creamy in the centre and dark golden and crisp on the outside. Glossy with garlic and olive oil, this is rich, bold food that’s not for sissies. There are one or two dishes that aren’t as strong as others, but given the fact that they’ve just opened, we’re sure they’ll be up to scratch soon.

And with reasonable prices for small (R15-R22) or large (R35-R45) portions, the dishes should satisfy even those most sceptical of tapas. To end the meal, do order the Spanish rice pudding. More saucy than you’d expect, it’s generously flavoured with vanilla and cinnamon, with the clever addition of orange zest. Scrape the bowl and order another.  At R12 – why not?

Reasonably priced wines by the glass and bottle are going to make this a pumping after-work drinks spot, not to mention the handful of craft beers on tap and the intriguing cocktails – although perhaps not the chorizo-infused mojito (we’ll have to brave that one next time). A few Spanish sherries keep things traditional.

They’ve just opened, so some menu items are not yet available, but the waiters are charming, knowledgeable and quick on the draw.

The newly decorated space is a feast. A stained glass rosette in gem colours rests against a wall of Spanish film posters, plastered and peeling. Mismatched wooden chairs are nevertheless all the same height for each table, and add quirkiness to the masculine interior. Sit at a soft leather booth or get cosy with your neighbour at one of the long, sociable tables.

If you can take your eyes off your plates, you can admire the repurposed parquet flooring, upturned barrel ceiling above the bar, the copper urns and jugs dotted around, the golden bull’s head and the moulded ceilings that resemble gleaming meringue.

A nightclub is planned for the space below the restaurant, making the windows in the floor (yes) a thrill for voyeurs.