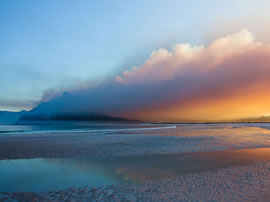 As the fires that have ravaged Cape Town over the past five days die down, restaurateurs, hoteliers and market owners have been counting the cost.

The management of Hout Bay hotel Tintswalo Atlantic, which was razed to the ground, have announced that they will rebuild the hotel. In a moving post on the hotel’s blog, owner Gaye Corbett tells the story of waking in the night in Joburg to hear about the fire burning the lodge in Cape Town.
In a message on Facebook, the hotel pledged to commemorate 2 March on an annual basis and raise money for the organisations who worked hard to try and save the lodge.

The Tokai Forest Market also suffered terribly in the fire.
Owner Michelle Hoedemaker described it as a “crazy loss”, explaining that the toilets and the locked container which had all of the market equipment inside – including tents, tables, sound systems and banners – had been lost in the fire. Fortunately the main structure of the market was unaffected, and while the market will not take place this weekend, it will return next Saturday at reduced capacity.

La Colombe closed and the Silvermist Wine Estate was at one stage evacuated as flames threatened the farm. The restaurant which only recently relocated to these premises, was thankfully unscathed and is now open once more.

Flames also threatened Eagle’s Nest, but the wine estate was eventually saved by the rain. The tasting room has now reopened.

Wine farm Groot Constantia is likewise open once more, after sustaining a small amount of damage to some vineyards.

Wine farm Beau Constantia closed their doors on the Wednesday when the fire was at its worst, but thankfully had no physical damage to the property, while Buitenverwachting’s farm and restaurant escaped unscathed, although staff members and farmers pitched in to help where they could.

Despite being out of the direct line of the fire, many restaurants in the suburbs near the fire were affected.

Staff at Riverway Café in Hout Bay said that the restaurant was covered in ash and surrounded by smoke. They were forced to close their doors early, especially on Monday 2 March when the fire was very bad. “We were in great shock because of people’s homes we witnessed in danger of the fire,” said one staff member.

The team at Café Roux in Noordhoek – some of whom live in in the affected area, helped prepare pastries and coffee for the firefighters and volunteers. “The fire really brought the community closer together”, said one of the staff members. Suikerbossie staff members also contributed food and beverages to the firefighters and helped where they could. “Our owner is very good friends with the owner from Tintswalo Lodge so he was very shocked and saddened by the fire,” said one staff member.

Constantia Nek Restaurant meanwhile actually saw an increase of customers due to some of the roads being blocked and even opened up on Monday, when they are usually closed, to accommodate more diners. Manager Glenn said that the fire was very scary, but that “it was amazing to see how everyone pulled together to help each other out.”