John Shuttleworth to leave Rust en Vrede: Taste the best dishes of the last six years with his ‘Last Menu’

Acclaimed chef John Shuttleworth will be leaving Rust en Vrede in July this year, exactly six years after he took over from David Higgs as head chef. During his tenure, the restaurant has been a regular contender on the list of Eat Out Top 10 restaurants, not to mention winning the 2012 Service Excellence Award.

John and his family will be returning to the UK, the place of his birth and training, where he has set his sights on that ultimate culinary catch: a Michelin star. He will be succeeded by his sous chef, Fabio Daniel, but before he leaves, Shuttleworth is offering a playful, charming parting gift: a sort of time-traveller’s dining experience, a four or six-course menu featuring favourite dishes through the last six years. Eat Out critic Jeanne Calitz went on a trip down memory lane.

As those who have dined here before would know, the experience is one of generosity – from the gracious welcome at arrival, to the elegant box of sweet friandises offered as farewell. By the time we decide on a menu, we’ve been graced with no less than four amuse bouches, including a goat’s-cheese-and-beetroot wonton, a sweetcorn fritter with Sriracha mayo, and possibly the best oyster I’ve ever had: a pure breath of ocean air, garnished simply with apple-and-horseradish salsa. 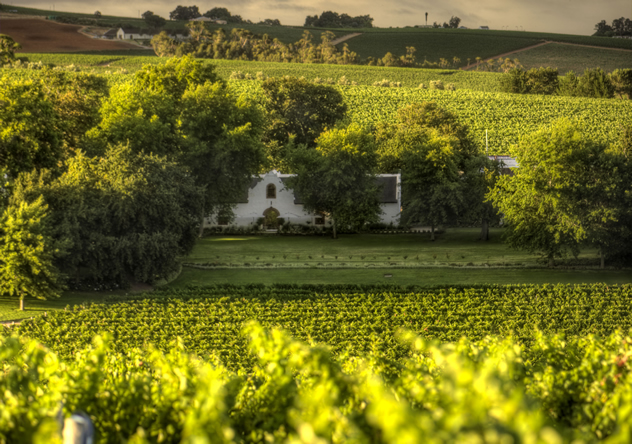 The historic estate, nestled amongst the vines. Photo supplied.

On the menu, each dish is marked with a year to indicate its origin. From John’s first year, we dine on scallop tartare and smoked tuna, served with pickled morels and a feather-light sweetcorn mousse that forms a perfect, slightly sweet counterbalance to the saltiness of the fish. 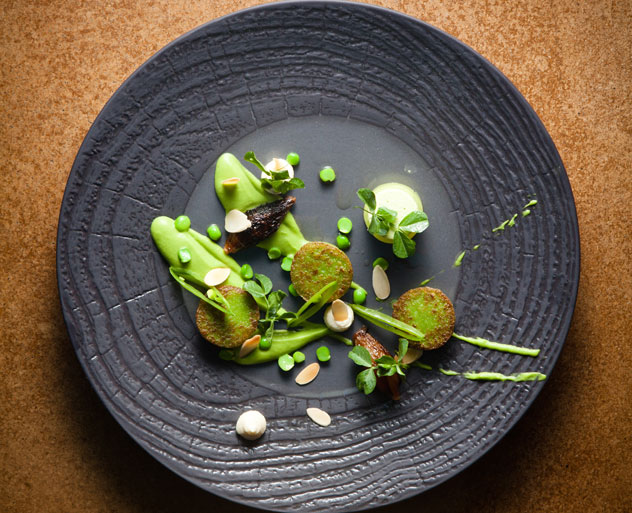 A dish from 2016 at Rust en Vrede. Photo supplied.

Then comes the Chalmar beef fillet (2013), wonderfully complemented by oxtail ravioli and porcini foam. The year 2014 is represented by, among other tempting options, a serving of masala-roasted monkfish, plated on a smear of blackbean púree and adorned with a scattering of tomato-and-papaya salsa for brightness. Sourced from the 2015 menu, the herb-crusted lamb loin, accompanied by a spoonful of braised lamb shank and a moreish helping of tomato-and-paprika risotto, is a fine choice for a main.

For dessert, you could gleefully indulge in a panna cotta infused with rose geranium and pine nuts and served with pear sorbet and, heavens above, a small but perfectly executed Earl Grey donut. Or, if you’re feeling flush, and have had enough time-hopping for one night, there’s always the timeless choice of the cheese trolley, a sure sight to quicken the pulse.

The staff members are professional but very personable, in tune with the overall feeling of the restaurant – stylish but not at all stuffy. 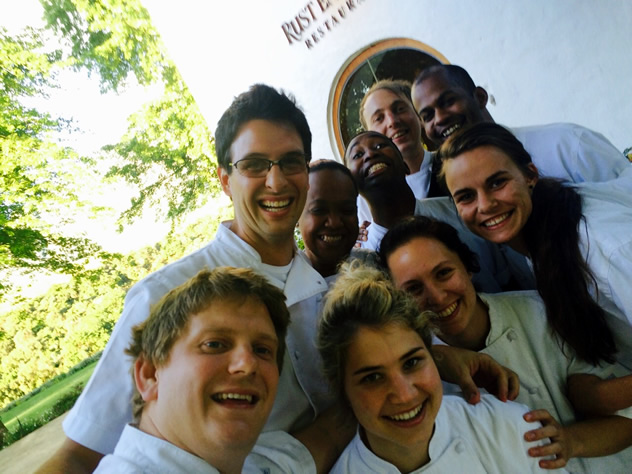 John with his dream team at Rust en Vrede Restaurant in 2014. Photo courtesy of the restaurant.

This atmosphere is created in particular by an open-plan design that allows the diner a peek into the kitchen and the preparation of the food. The mood on this night is relaxed and calm, even playful, with John clearly in superb control and cracking jokes with the floor staff.

I would imagine that the last service, come 1 July, might have a different flavour. Some nostalgia, perhaps; a touch of regret. Mostly, I hope the feeling is one of celebration, of a job very well done, of a challenge seized and mastered. I hope the night ends with a roaring party and a toast to John with a magnum bottle of our finest MCC, a proper South African send-off. He deserves nothing less.

* The Last Menu will be served until 1 July, when chef John Shuttleworth will depart and Rust en Vrede will close for a month for its annual winter break. 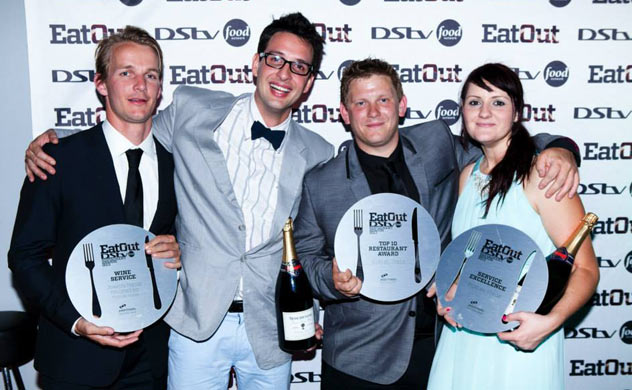 John and Andrea Shuttleworth with their awards at the Eat Out Restaurant Awards. Photo by Jan Ras.