MasterChef 2 episode 22: Ducking it up 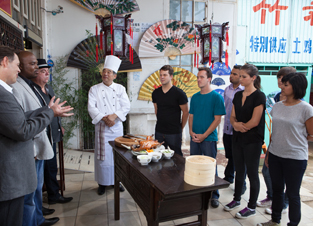 Tuesday night’s episode saw the housewife from Howick, Karen, hanging up her apron, while the top six left Ethiopia jubilant and looked forward to being back in the comfort zone of the Nederburg Estate. Instead they found themselves disembarking in Joburg and shuttled off to New Chinatown in Cyrildene.

Judge Benny Masekwameng introduced a “friend and colleague from Tsogo Sun”, chef Chang An Song, who described his style of cooking as “simple, clean and presentable”. The contestants were presented with his perfect Peking duck, which chef Song said was all about the skin and the rich and delicious taste.

The challenge was to create a “magnificent” platter-style duck dish for a group of Chinese food experts, using Asian flavours as the inspiration. Fortune cookies determined the teams: Seline, Ozzy and Kamini in the red team, while Tiron, Leandri and Jason donned the blue aprons. The losing team would go into an elimination challenge.

The teams were provided with the duck portions and had to source the rest of the ingredients in Chinatown with a budget of R1000 and 10 minutes to do the shopping. With only a few moments to strategise, the pressure was on!

None of the teams seemed sure of what they were doing and were making it up with the choice of ingredients and cuts of duck. It was soon apparent that none of the contestants had cooked duck before! Judge Pete Goffe-Wood warned: “If you are going to have an element on your plate that none of your team have cooked before, you’re asking for trouble.” The judges looked worried – with good reason.

Cooking the duck breast proved problematic for the red team and judge Andrew Atkinson offered some tips to help them along. Meanwhile, the blue team was also in hot oil with their spring rolls turning out way too brown.

With 20 minutes left, the teams pulled out the stops to make sure their dishes came together. The red team burned their cabbage dish and there was no way to save it. Ozzy decided he was going to do it over again with only 10 minutes to go.

The guests awaiting the dishes included Emma Chen of the Red Chamber restaurant in Hyde Park, Mr Li, one of the first mainland Chinese to open a restaurant in Cyrildene, and Miss Chinese South Africa. The blue team went first: honey and soy marinated duck with vegetable spring rolls; Asian-style vegetarian broth served with egg-fried rice; and pak choy done in garlic and ginger. The tasting panel noticed the burned spring rolls while chef Song remarked that the sipping bowl was too big. The broth also got a beating and lacked garnish and imagination; however the tasting panel complimented the preparation of the duck.

Next up was the red team. They presented a sweet chilli duck topped with wonton crisps; honey and ginger duck neck, served with black fried rice; and two vegetarian dishes comprising beans and cauliflower with soy sauce and chilli and black sesame seeds and cabbage. The duck necks were found to be rubbery; the black rice surprised and delighted the judges; and the duck breast was declared “very tasty”. Emma Chen was more scathing and felt the red team’s efforts were “clichéd”.

The tasting panel of experts had to vote for the teams by switching on a red or blue lantern. The red team won the challenge by four votes to two! But it wasn’t over.

Pete Goffe-Wood had this to say: “I said something previously at the Yaya village, how the calibre of food that you guys deliver made me proud to want to invite guests to share food at our table. And today I wished I had never uttered those words.” He went to say the food presented was “abysmal”, from the unsavoury broth to the burned spring rolls and almost raw duck necks. “Today, as far as I’m concerned, you’re all losers,” he added, sounding very Gordon Ramsey-like!

Jason, Tiron and Leandri will fight for survival in an elimination challenge in next week’s episode while the winning red team got to spend time with season one winner Deena Naidoo at his restaurant, Aarya, at Montecasino. His advice: “You need to find yourself at rock bottom to understand what you are made of; you need to be stronger now than you’ve ever been before.”

Read our list of best Asian restaurants in SA and try one (or all) of our 35 favourite Asian recipes.