MasterChef SA 2 episode 19: Wake up and smell the coffee 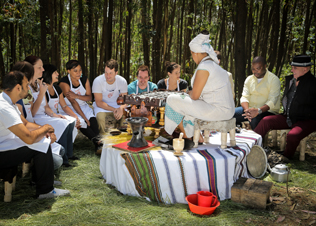 If last Wednesday’s MasterChef was the wonderful watch, last night’s was the exotic treat. The previous episode started with Tiron cooking off against the sweet, but truly great, chef Jackie Cameron of Hartford House for the immunity pin. The two created Jackie’s guinea fowl “au vin”, with gnocchi, pea purée and Parma crisps. In a blind tasting, Jackie’s plate won, so there was no immunity for Tiron.

The three in the elimination round, Joani, Karen and Ozzy, were given bland, cooked mince to turn into classic boboties. Ozzy had never made nor tasted bobotie but he and Karen scraped through to land among the last eight contestants. It meant that Joani, a former fashion designer from Durban, was out of the contest.

When the remaining eight assembled at their digs before Tuesday’s MasterChef session, they found eight travel bags with eight passports, each containing a new visa – to Ethiopia!

In Ethiopia, the theme would certainly be coffee. But first the contestants were introduced to the inspiring, ancient delights of the country’s culinary culture – sourdough injera, pots of wots, chillied berbere – and the local Addis Ababa sights by judges Andrew Atkinson, Benny Masekwameng and Pete Goffe-Wood.

One early Ethiopian morning, the contestants found themselves high up in a forest, dressed in their aprons, being treated to local hostess Hannah’s coffee ceremony. Afterwards, their outdoorsy challenge was to create, in 45 minutes and on spartan stoves, a meal that featured coffee as the stand-out flavour, using ingredients in the contestants’ Ethiopian mystery boxes.

(Find out where to get killer freshly roasted coffee in your city.)

“You need that coffee to kick in now.”

From the start it was clear that some of the contestants were succumbing to the perils of the altitude, particularly an oddly vague Seline and a tearful Amanda.

“What a magnificent day this has been in this forest. But…”

Despite the brilliantly inspired dishes presented, two of them delivered their creators into a pressure test. They were Amanda and Leandri, the latter facing elimination despite the judges lapping up her smoky, “fabulous” soup, which had “just not enough coffee”.

Kamini and Tiron both won the Masterclass and will spend time in Ethiopia’s Jimma Valley with a chef, while Leandri and Amanda face a surprise in the heart of Addis Ababa in Wednesday night’s episode.