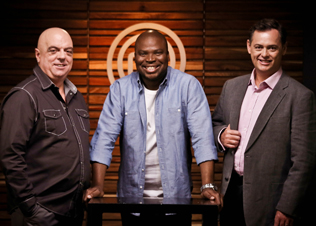 “The fab four”
After Tuesday night’s pressure test, when we said goodbye to Jason, the top four contestants arrived at the Nederburg Estate donning black aprons. As they made their way through the MasterChef kitchen, Seline took in some of the “strange” implements placed at the workstations: palette knives, gloves and goggles. The plot thickened as they passed a mannequin draped with a white chef’s jacket, without a name embroidered on it. They lined up in front of the three judges and it emerged that all four would go into the pressure test, which judge Benny Masekwameng described as “the toughest one yet”. Someone was definitely going home, but the stakes increased when he added that the winner of the pressure test went straight into the finale. Ozzy, Seline, Kamini and Leandri all desperately wanted this and the scene was set for battle. “There’s no playing it safe, you either go for it and you fail, or you go for it and you win. But you go for it either way,” said Seline.

“When food meets science”
And so judge Pete Goffe-Wood introduced one of the country’s “most adventurous chefs”. He has taken three restaurants to the Eat Out Top 10, won the Chef of the Year title in 2005, and is known as the “maestro of molecular gastronomy”. He was Pete’s good friend Richard Carstens of Tokara.

Chef Richard unveiled the dish the contestants had to replicate with great aplomb, presenting his chocolate handkerchief with billowing smoke. As if that weren’t intimidating enough, there were 11 elements on the plate that had to be crafted to perfection. The foursome was daunted by the “make or break” challenge that lay ahead. They had two hours to re-create the dish. Armed with Richard’s recipe, agar agar (a vegetarian gelatin substitute made from a variety of seaweed) and liquid nitrogen, the contestants began measuring, whipping, whisking and mixing.

Ozzy was pleased with his efforts and hoped it would all come together at the end. Kamini seemed to be falling behind on time and Pete gently reminded her to step it up. The curdling of the egg whites added to her woes and she had to start it over again. The memories of the gateaux pressure test were playing on Kamini’s mind and it started showing.

With one hour remaining, the contestants were giving it their all. Tempering the chocolate and getting it to 34 degrees was proving a challenge and there was lots of trial and error involved in re-creating the chocolate handkerchief. Leandri had worked with liquid nitrogen during her chemistry classes as a student, but conceded that this was a “completely different context” and a “scary experience”. Getting the mousse on to the spoon and dropping it into the bowl of liquid nitrogen stressed out the contestants and it was down to the wire.

As the last three minutes ticked by the contestants plated and finished off the remaining 11 elements. When judge Andrew Atkinson belted out the “Stop cooking!” order, Kamini realized she had forgotten to put two of the elements on the plate!

“Bitter chocolate”
First into the tasting room was Seline who felt proud of what she achieved with the complex dish. Chef Richard said on first impressions it was “quite close” to his dish and, on tasting it, said the overall the flavor was there. Pete praised her jelly, yet confirmed that her mousse let her down.

Next up was Ozzy, who told the judges it was the most excruciating challenge he faced in the MasterChef kitchen. Some of his elements didn’t work and even Ozzy conceded his chocolate handkerchief was more of a “flying carpet”.

And then it was Kamini’s turn. She described the challenge as her Everest. The judges enjoyed the elements she managed to plate, despite her leaving out two elements.

Leandri was last to present her dish and she received a resounding vote of approvalfrom all the judges including Chef Richard.

It was no surprise that Leandri got the one-way ticket to the finals. Her celebration was made even sweeter when the judges announced that her sister Seline made it through the challenge too.

In the end we bade farewell to sweet Ozzy and it was girl power all the way to thefinals!

Next week, tune in to see esteemed chef Luke Dale-Roberts of the Pot Luck Club and The Test Kitchen, SA’s current number one restaurant, put Kamini and Seline through their kitchen paces.

“Putting on the gloves and goggles, I feel like I’m back in high school doing science experiments.” – Seline

Did you miss Tuesday night’s episode? Catch up on all the action on our dedicated MasterChef SA page, brought to you by Nederburg.