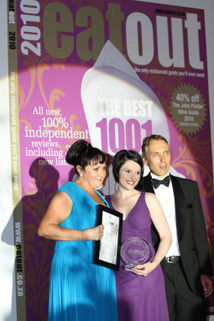 Since being crowned best chef at the glitzy 2009 Prudential Eat Out Restaurant Awards last Sunday, Chantel Dartnall hasnt had a moment to herself. Between dealing with a string of interviews and a fully booked restaurant, the able artisan managed to answer a few questions.

The phone at Restaurant Mosaic mustve been ringing off the hook since the awards?

The restaurant is so busy at the moment, we cant get out! And the past week has been jam-packed with interviews between cooking, so its been very hectic.

You looked stunning at the awards. How long did you decide what to wear?

[Laughs]. It took me months! I finally ended up buying something from a quaint little boutique in the Brooklyn Mall. I usually go for the little black number, but this year purple just seemed like the better choice. And its my favourite colour.

Your mother and stepfather joined you at the awards. Were they thrilled about your win?

I think we were all completely bowled over; it was just so incredible. Especially with the countdown. When they passed number four and then number three, my heart skipped a few beats because I thought that perhaps we hadnt made it this year.

Did you ever expect to be nominated as a Top 10 restaurant and win chef of the year?

No, it was completely unexpected. I had so many people saying that I must have known, but it really didnt cross my mind. Id hoped that we would have moved up the list, but I never thought wed do so well.

We tend to talk about our ten-year plan, but now its been accelerated to a five-year plan! Were very excited, because were still so young. Were just beginning to find our feet, so at this stage I feel were still exploring our own identity and experimenting, which makes it fun.

How did you celebrate after the awards?

I called all my chefs back in Pretoria and everybody burst into tears of joy. Then we went on Rovos Rail for two days, not because wed won, but because wed planned to take it easy for two days after the awards.

When I got back to my kitchen, we all had a glass of champagne and toasted one another. Were also planning a big party very, very soon.

What is your favourite celebratory meal?

It doesnt really matter what I eat. Whats most important to me is that I’m surrounded by the people who are most special to me. And definitely a glass of good Champagne!

Something special, such as angel-hair pasta with baby langoustine tails and scallops topped with Champagne foam.

By now most people know that you love flowers. Which flowers symbolise celebration to you?

At the moment weve got the most beautiful chamomile flowers. And, of course, day lilies, which are my signature flower. When I got back home there was a carpet of the most incredible colours waiting for me.

What are you excited about in terms of food for the new year?

Ive started exploring the concept of botanical cuisine. Weve become known as a restaurant that uses a lot of flowers. In addition to the creative aspect, Id like to create a more in-depth understanding of flowers and their uses and how they contribute to the food that we cook.