Restaurant of the Year: The Greenhouse 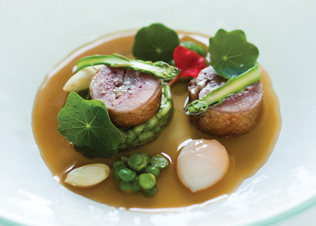 “It’s been crazy, since the award,” says Peter Tempelhoff, leading me through the kitchen where his team is hard at work. Earlier this month, The Greenhouse, where Peter is executive chef, took home the Restaurant of the Year Award at the Eat Out DStv Food Network Restaurant Awards. Judge Abigail Donnelly sang that praises of sublime dishes like pickled mullet and red bream sashimi, orange glazed diver scallop with creamed endive and daikon and apple slaw, and a host of other drool-worthy dishes. But what is it that makes this restaurant the best in the country? What’s the secret ingredient?

The ingredients themselves, are perhaps a good place to start. In Peter’s kitchen, we pause to examine fresh kabeljou. “The kabeljou is farmed in PE,” he explains, lifting up one of the shining, silver fish. This little guy forms part of something fairly unique – a seafood tasting menu that focuses on sustainable seafood.

“Prawns are on the orange list generally, but we’ve got a supplier who can provide us with prawns that are farmed sustainably,” Peter says.

The vegetables, meanwhile, come from three different suppliers: Green Scene, The Magic Man (for micro-herbs) and Crisp, while nasturtiums and other wild herbs are foraged from the hotel’s own gardens. Foie gras, scallops and other hard-to-find delicacies come from Socomaf.

Putting together the menus, is a work of art in itself; an exercise in balance. Each week, Peter and his team look at one of the dishes, so that the menu evolves slowly, without resulting in ingredients being repeated. “If you change one thing it affects the two tasting menus,” he tells me. It’s an intricate process – but one that has resulted in a perfectly curated menu.

This attention to detail is visible in the kitchen. I watch head chef and Peter’s right-hand man Gerald van der Walt preparing a chicken mousse, just one component of a dish, which will be cooked and tested at two different stages before it makes it into the final dish. Nearby, one of the other chefs, Dayna Hendricks, is busy removing cherry jellies from moulds and dropping them into a broth. “The hydrocolloids react with the alginate broth so you get a jelly shell with liquid in the centre,” Gerald explains, as if it’s the most natural thing in the world. I make a mental note to google the spelling.

Warm and self-effacing, it would be easy to forget that this is a chef with some serious credentials. He’s worked under the likes of Marco Pierre White and Giorgio Locatelli. “From Marco I learnt the importance of timing, and I took a lot from Giorgio when it comes to letting your ingredients speak for themselves”. His most influential mentor? Michelin-starred chef Aaron Patterson of Hambleton Hall. “He taught me the importance of balancing salty with sweet – a little bit of sugar to counter the bitterness, salt and acidity – and textures in the dishes.”

For now, though, he’s got his hands more than full, as executive chef for all the restaurants under The Collection by Liz McGrath. From the sounds of things, he gets involved in every aspect of the restaurant.

“Wine is so important to me,” Peter tells me. So much so that when he couldn’t find a good quality, affordable pinot noir to pair with his dishes, he created one himself with his former sommelier and Klein Constantia winemaker Adam Mason. Yardstick wines is now into its third vintage, and received four stars in last year’s Platter guide.

As I leave, I discover it’s Peter’s birthday, and for now, he’s off for an early dinner with his family before service. Where are they headed? “Probably for some cake at home, and then to Borruso’s for pizza.”