Eat Out critic Marie-Lais visits Jasmine Syrian Cuisine in Benoni, a charming little restaurant run by a couple from Damascus. 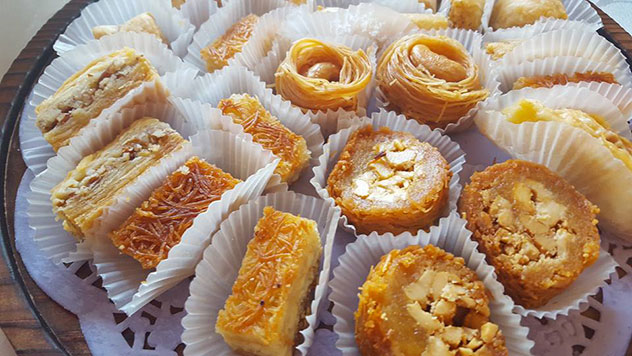 Be sure to enquire about the traditional sweet treats. Photo supplied.

Amongst a little row of boutique shops that were once houses is one that still looks like a suburban home, marked out by the Jasmine restaurant sign. Inside it’s hush-quiet until husband-and-wife team Yaser and Safaa Jabri Al Rehawi approach, bearing silverware for the welcoming coffee. The black, fragrant liquid is poured into beautifully thin cups as a pre-dinner ritual.

Safaa was still at university in Damascus, Syria’s capital, when she and Yaser, who owned a sweet factory, had to flee the city with their two sons. The family found asylum in South Africa, and now the couple cook in this restaurant named for their former home, known as the City of Jasmine.

The menu at Jasmine features items like burgers and cheesecake to satisfy those less comfortable with tasting new dishes, but it’s the uniquely Syrian food – much of which is off the menu – that makes the place outstanding.

A tableful of different starters is rather appealing. While there is no kibbeh on the menu (you could request it when you book), muhammara makes an appearance; the sausage-shaped paste of roasted red peppers, walnuts and bulgar is usually a filling for kibbeh. This version has hot chillies added for the local Indian patrons, says Safaa.

There are other typical items like a Syrian-spiced hummus and baba ganoush, here made with creamy aubergine, garlic and fresh lemon juice, but with more Syrian spices and herbs and crushed walnuts. Syrian spices often include allspice, dried red and black pepper, coriander seeds, cumin, nutmeg, cloves and cardamom, and the herbs, thyme and parsley. 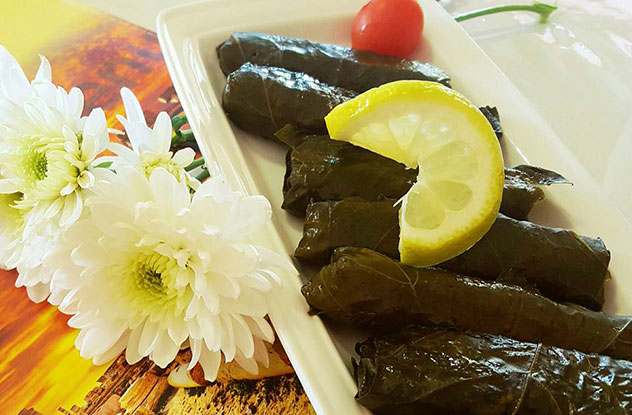 Items not on the menu but discussed and happily devoured were samboosik, a beautifully puffed crisp pastry containing halloumi and vine-leaf rolls, similar to dolmades but containing an almost smooth rice filling that’s deeply savoury with olives, tomato, onion, garlic and sour pomegranate. They are outrageously good, first steamed over a stew pot until the leaves are utterly soft, then served at table with a dish of thick and lovely yoghurt. There are three good Middle-Eastern salads and chicken and beef samoosas on the menu. 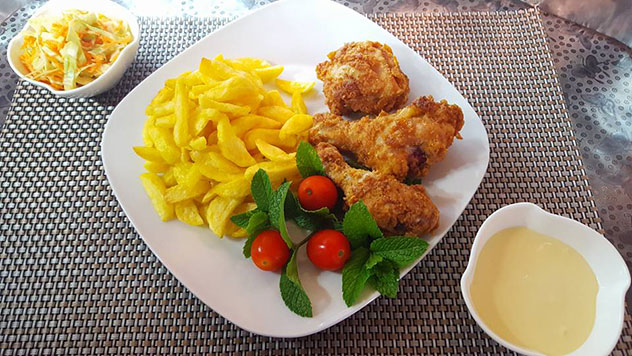 Among the main courses are some seemingly local must-haves like a burger and ‘brosted’ (fried) chicken, as well as shwarmas and shish kebabs. On Safaa’s advice come two menu items, falafels and a dish called fatan that’s generally eaten for breakfast in Syria. The latter consists of softened chickpeas in tahini yoghurt, flavoured with pine nuts, nutmeg, cardamom and mint, and served with pickle alongside.

The falafels are rounded out like smallish doughnuts – paler, crispier and herbier than you might be used to – and served with a wonderfully sour fruity sauce. The pickles on the side of both dishes include whole green chillies, which I suspect is another nod to local guests.

A slightly watered down version of Syrian desserts is also evident at the end of the menu. Instead of a Syrian version of baklava with fruit and nuts, you can have fruit salad or cheesecake. However, there is a traditional nascoffee cake (not to be confused with Nescafe), which is a layered confection flavoured with real, dark, sweetened coffee and nutmeg that originates from Damascus.

Delicious Syrian coffee with cardamom seeds in the pot is part of the pre-dinner ritual. The restaurant is alcohol free, so your options are limited to this or English tea, espresso or cappuccino. 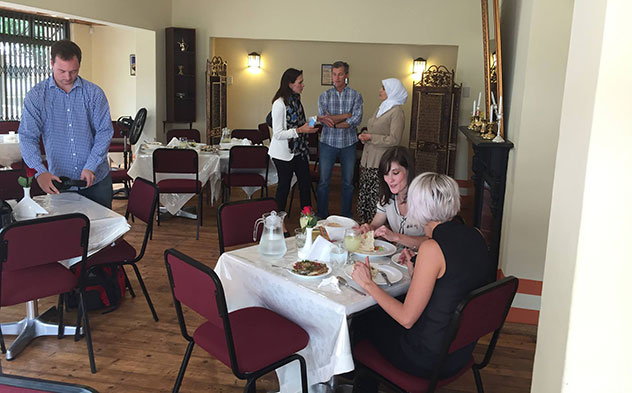 The interior is comfortable and homey. Photo supplied.

Service from the couple is superb as they work the tables and clear. The card machine seems to be subject to an intermittent signal so it’s best to have some ready cash (there’s an ATM on the corner). 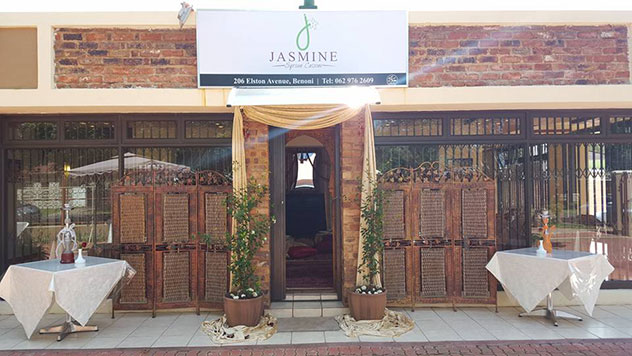 Damascus is known as the City of Jasmine. Photo supplied.

During the day, Jasmine is beautifully cool and quiet. It gets noisier when families arrive in the late afternoons and at dinner time. A pale tangerine hookah stands near the front door and there’s a pretty wash stand set up at the back of the spacious, pale-tiled room, with jasmine décor and a wall of paper butterflies. The menu and some of the wall pictures feature mosques like the Umayyad and ancient ruins like the city of Palmyra, now even further ruined during the current wars.

Safaa’s English is quite good, so do ask about traditional Syrian dishes that may not appear on the menu.

Have you visited Jasmine Syrian Cuisine yet? Write a review now and we will pledge a meal for a hungry child through Stop Hunger Now SA.