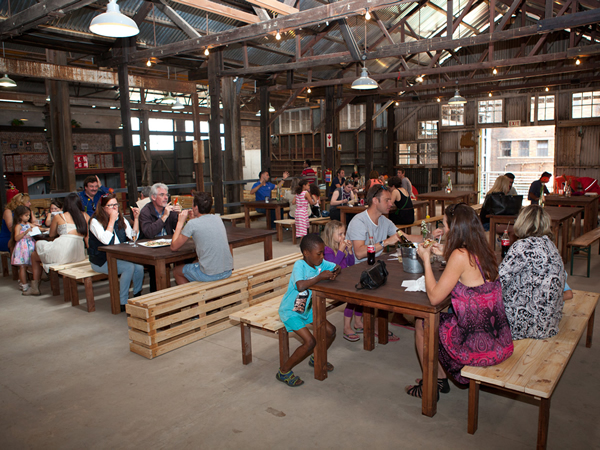 At the very beginning of Fox Street, massive sheds cover an area that spreads from Newtown through to Ferreirastown. (These soaring warehouses could have housed half of Johannesburg over a century ago.) Stage One, like a little village, is filling up with food and wine stalls, with a new bakery, a chocolaterie, cheesemaker, restaurants, delis and homeware on the cards. The Good Luck Bar Shed originated in 1894, when diggers would slake their thirst for gold in tankards too. Stage Two, across an interior road, is set to house a hotel, apartments and interesting office spaces. Here’s how Joburg eats under one enormous roof:

It’s about choice in every sense. If you’re hot after a hike through the parking lot, waylay yourself at the Happy Me stand with some flavour-popping bubble tea. The oysters of the day – wild from Mossel Bay, compact and intensely flavoured – paired with Villiera Tradition Brut bubbly make an appealing starter from Dee Oysters and Champagne.
A glance at the fresh market stand reveals brightly hued tomatoes and herbs, begging for fresh-baked artisanal bread and homemade coriander yoghurt from the Lebanese Real Wraps stand, maybe with a creative splash of chocolate-and-red-wine balsamic vinegar from Thyme to Dine. It’s worth adding a little Persian feta from Bordeaux Bros, and slip some wildebeest and cognac terrine into a packet to take home.
There’s a good selection of oils and more Mediterranean goodies at Contessa, beautifully cured meats from Simone del Malvo (including hard-to-source finocchio Italian sausage), the best tapenade from Bordeaux Bros and pungent, hot chorizo at Tico Tico. 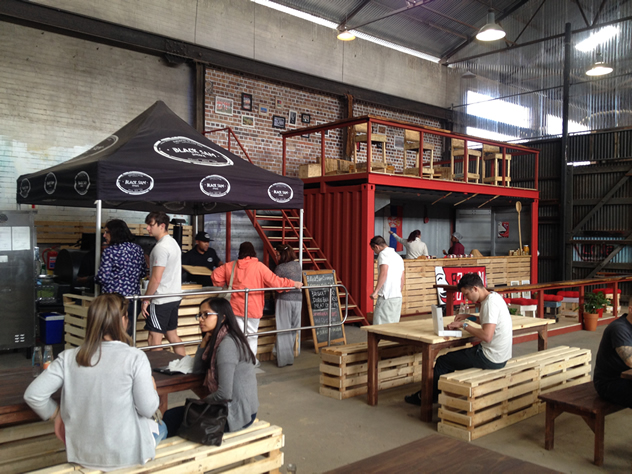 Have shellfish cooked before your eyes from Prawn Star, hot trout from Lesotho served with lemon pieces, potato and artichoke at at Maluti, and, for vegetarians, a cashew and chèvre empanada from Gaia Culture and little crisp pumpkin cakes from Contessa.
For dessert, decide between one of the perfect pieces of French patisserie from Rather Tart: cherry clafoutis (five little mouthfuls of angel song) or gossamer crêpes. Or the winner might be glossy gelato, densely green with pistachios, from La Cremosa, or frozen yoghurt of the day (perhaps pineapple and vodka) from The Freezery. In the end we go for great quality artisanal cheeses and preserved figs from Bordeaux Bros.

Wine selected from the Good Luck Bar Shed is served at the trestles upstairs by the glass and bottle, with ice buckets. The selection is not enormous but includes Boschendal, Graham Beck, Barista, Beyerskloof, Durbanville Hills and Warwick. Champagne can be obtained from Dee and other SA labels from the bar, alongside craft beers from all over the land. There is Kirimahiga artisanal coffee from Origin or try an Ethiopian blend at Bean There. Else opt for a cold-pressed juice from the Colour Me stand. 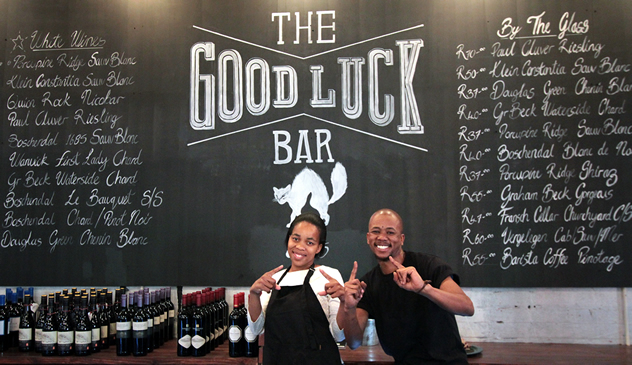 It’s vibey and busy-sounding, though nobody is moving fast or even eating fast. The space appeals most to the arty and the trendy sorts. It’s mind-bogglingly enormous, under high, old rafters, furnished with upcycled and recycled wood.

You look after yourself. The takeaway platters from the stalls are all eco-friendly, in the form of coconut veneers, origami containers, bamboo boats, glass or good old brown paper. Not a speck of styrofoam or plastic. Payment is by card or cash, or Snapscan in some places. 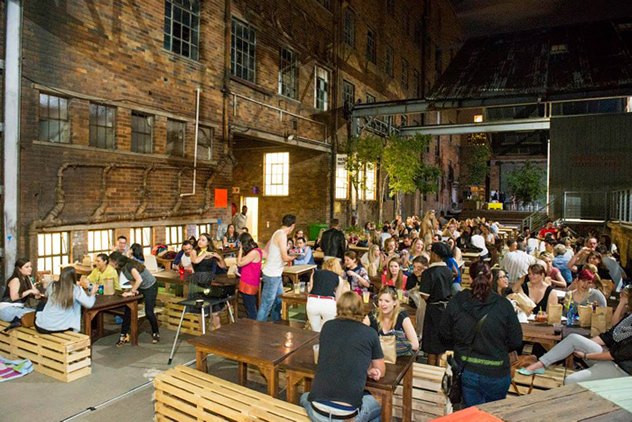 There are ready-made meals available from stalls in the bar area.