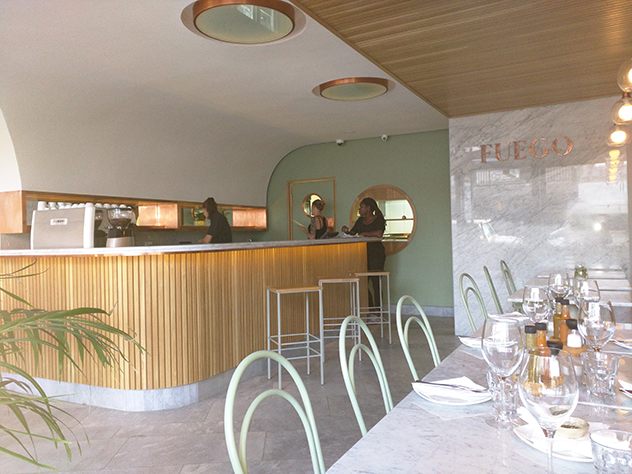 Just three weeks ago, a new Latin-American restaurant, Fuego, opened with a thoroughly beautiful interior. Katharine Jacobs set out to see if the tacos were as well-thought out as the décor.

Parking: If there’s no space on Regent Road, park inside The Point mall opposite
Best for: A relaxed meal with fellow taco and churro fans
Price: R65 to R88 for the tacos. Portions are small, though, so plan on ordering starters (R40 to R75) too.
Star ratings: Food 4, service 4, ambience 4

The short menu is Latin American in a broad sense. Ceviche from Peru, Mexican pico de gallo and Argentine chimichurri all make an appearance, but the result is, by and large, perfectly delicious. Tacos are small, so it’s a good idea to get things going with a couple of starters. 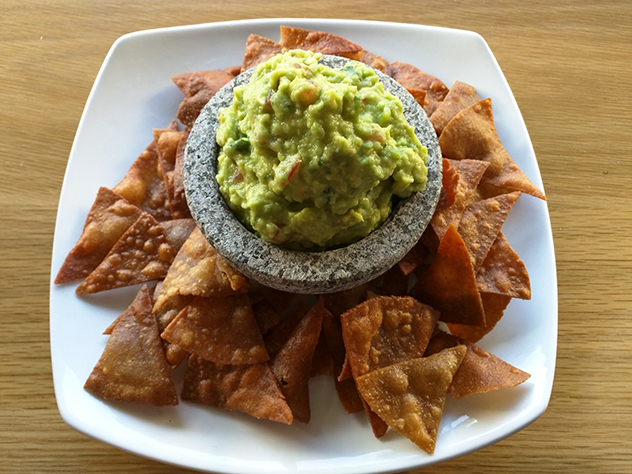 We kick off with a serviceable ceviche made with white fish, lime, red onions, peppers, avo and small pieces of pineapple, but it’s the ‘straight-up guacamole’ that follows that has us squabbling over the home-fried nacho chips and the last scrapings of creamy guac. There are also some interesting-sounding salads (watermelon, kale, mint and pumpkins seeds; and fennel, rocket, orange and olives), but we’ve got tacos to eat. 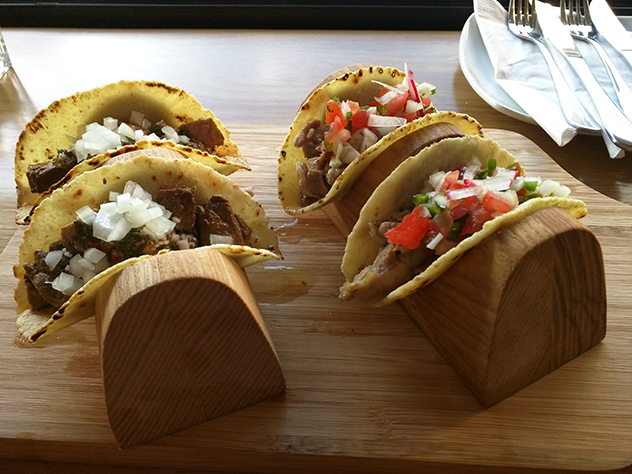 The tacos are served two to a portion, and are fairly small. Photo by Katharine Jacobs.

The tacos are made on site with corn (so they’re gluten-free, if that’s a concern) and remind me of some glorious tacos I ate in New York at a little Mexican spot that made somebody’s best NY taco list at the time. (The chef, of Dominican descent, apparently grew up in New York.) The pollo comes with grilled chicken, pico de gallo and radishes – and is tender and tasty, and happily also free-range. Some guac, sour cream, or something liquid wouldn’t go amiss here though. I make do with the house sauce instead for some added juiciness. The carne taco features steak, a chimichurri sauce and chopped white onions – also good, though the steak is slightly tough. 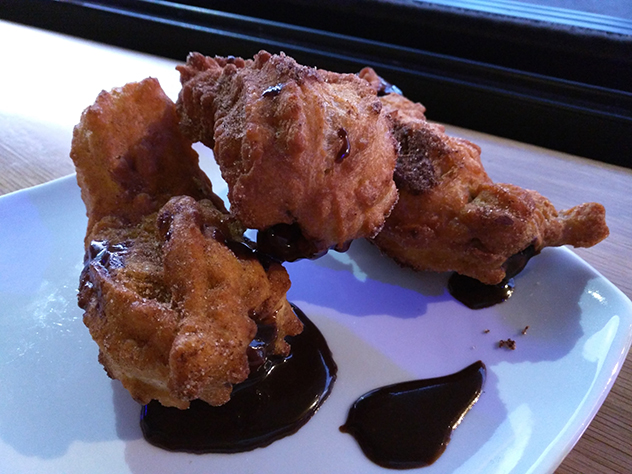 For pud, we try the taco sundae: a soft corn taco with a ball of ice cream inside, drizzled with sweet sauces. It’s alright, but I’m not convinced. The winner, however, and the dish that succeeds in breaking my January resolutions in one fell swoop, is the glorious churros. They’re beautifully crisp and golden on the outside, and as we bite into them, a well of chocolate sauce bursts inside. I am thoroughly absorbed and unable to speak for the five minutes it takes us to polish off the plate and lick my fingers, and face, clean. (You can also get them with the sauce served on the side if you hate mess, fun, and all the other good things in life.)

For now, Fuego is waiting on its liquor licence, but promise all sorts of exciting signature cocktails and tequilas when it does arrive. For now, make do with a soft drink from the usual list of suspects or an S.Pellegrino sparkling fruit juice.

Copper, white marble and minty green make for a serene, beautiful interior. It’s a small restaurant, and a large wood-panelled bar takes up much of the space, so there’s an intimate feeling, even when it’s busy. Bar seats at the shop-front make a great spot for people-watching on Regent Road.

They do brunch until 2pm, and I’ll be back to try the canela – cinnamon tostada with mascarpone and berry coulis – for sure. (Assuming that it’s unacceptable to eat churros for breakfast, of course.)

Eat Out reviewers dine anonymously and pay for their meals in full. Read our editorial policy here.

Have you been to new Fuego in Sea Point? Let us know what you thought by writing a review. (For every review you write, we’ll pledge a meal for a hungry child through Stop Hunger Now SA. Write a review now.)