Running wild at The Warthog

By the time the waiter arrived with the drinks, my wife was covered in stickers. The waiter wasn’t slow; Max is fast. Maxim Kapilevich is like something out of a bio-tech experiment where the best and worst characteristics of a two-year-old are concentrated in one mad little autocrat.

We’d brought a bag of things to keep him busy – wait, let me rephrase that – to try to keep Max seated for as long as possible, including a book of stickers. You’re supposed to peel off the animals and stick them in a farmyard scene. But it’s more fun to put them on people. (I don’t mean that sardonically; it really is.) 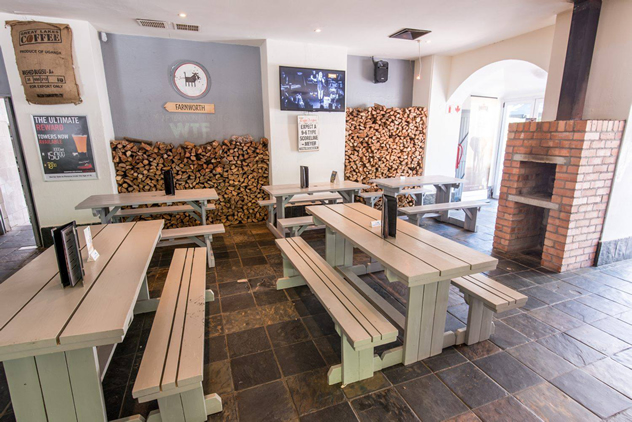 Inside at The Warthog. Photo courtesy of the restaurant.

We’d never been to The Warthog in Rondebosch, Cape Town, before. I don’t know how it is in your family, but we Kapileviches are firmly loyal when it comes to eating places. For us to try a new eating place (I hesitate to use the word ‘restaurant’ for any establishment that can withstand Max; it’s so much more than that) either requires my wife and I to feel uncharacteristically on top of things, or a flat-out crisis.

On the day that we went to The Warthog, it was sort of a combination of the two. I’d just returned from a trip abroad, so my wife felt like she had an extra pair of hands. And I felt pretty much the opposite for the same reason.

“Menu’s kind of limited,” said Michele as Max applied a turkey to her temple.

“Is it?” I hadn’t looked yet. I was pretending to watch the Bulls game on TV like a bachelor with his whole life ahead of him. 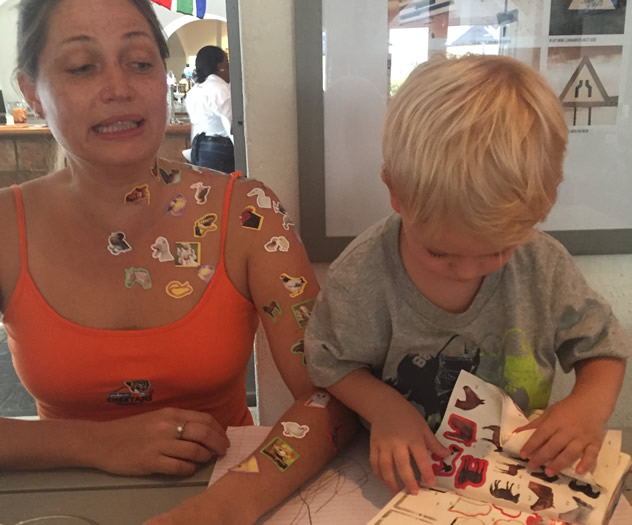 By the time the waiter came to take our food order, Max was outside. I found him hanging off the railing that separates the premises from the road. It’s entirely possible that in a few minutes he would have been playing in traffic. An untold proportion of parenting is you doing a shockingly poor job of it – don’t let anyone ever tell you differently. Saving your children from almost certain death is often a matter of luck, relief and guilt, in that order.

Michele went for the chilli poppers to start and Cuban chicken with “chorizo and tangy tomato chutney”. Cameron, our nine-year-old, wanted a cheeseburger. Max got the Chicken Rock ‘n Roll with bacon, feta and avo on a roll. I ordered a kilogram of ribs.

When we’d arrived, the place was mercifully empty, but now a young couple seated next to us was grinning at Max, who was breakdancing on a small stage below the television. 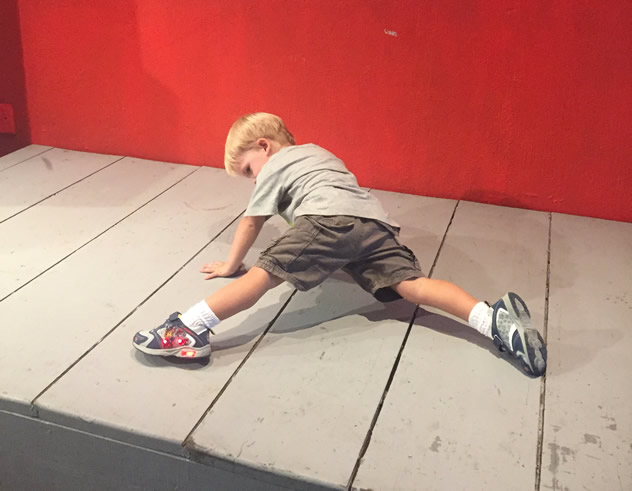 Max breakdancing on a small stage at The Warthog. Photo courtesy of Ami Kapilevich.

First out was the chilli popper. My wife and I looked at it: a lumpy, lonely loaf on a lettuce leaf.

We cut it in half. The bacon was stringy. 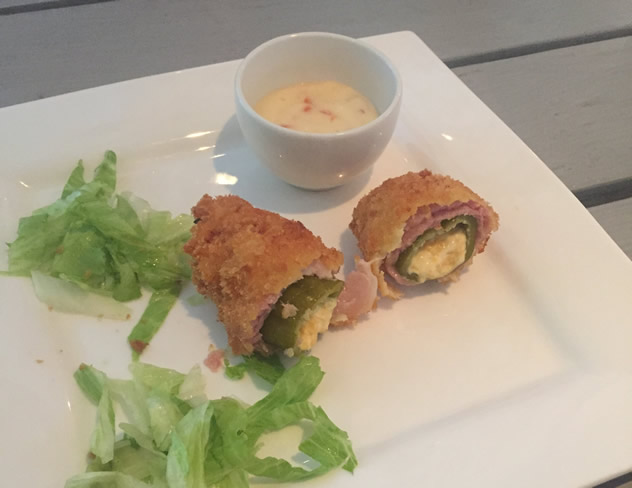 A Chilli popper and dip at The Warthog. Photo courtesy of Ami Kapilevich.

To be fair, this is not the type of place that you go to expecting great food. It’s a student pub. But when you have a two-year-old, you don’t go to a restaurant for the food. To be honest, I’m not exactly sure why people with two-year-olds would ever go to any restaurants at all. With us, at least, it’s almost entirely a matter of “getting out of the house for a bit”. If we want to connect over a decent meal, we hire a babysitter. 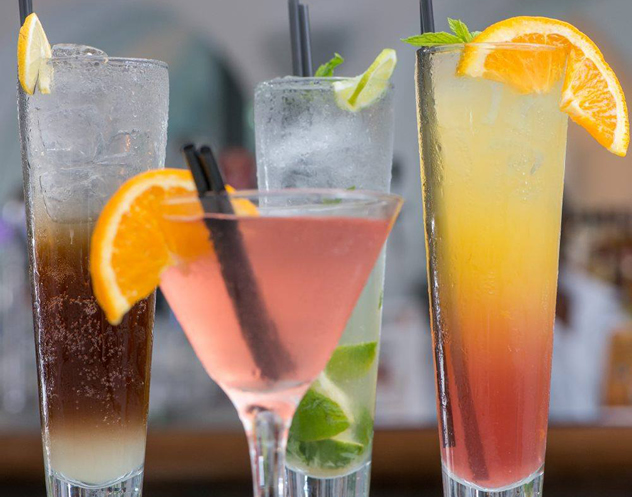 Cocktails at The Warthog. Photo courtesy of the restaurant.

So when the food arrived I wasn’t as dismayed as my wife was. The Cuban Chicken was a chicken breast on a roll with some dodgy sausage (“That’s not chorizo, it’s more like a Russian”) chopped up on top.

Cameron’s burger was good. The patty was homemade, and the bun was soft. It’s important that the bun of a hamburger is soft. People who serve hamburgers in hard or crusty buns are the same people who eat hamburgers with a knife and fork. They are not to be trusted. 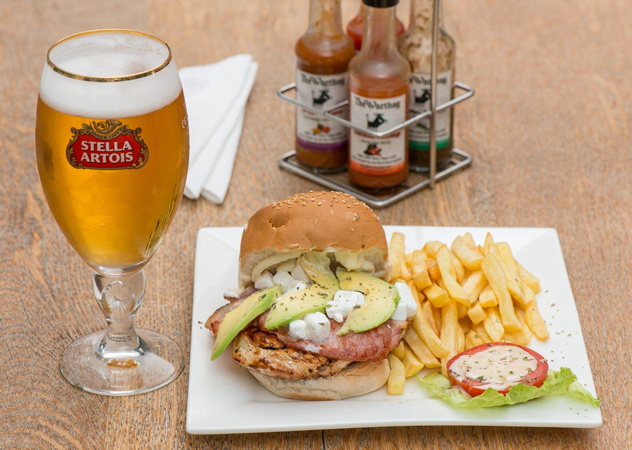 A burger, chips and a beer at The Warthog. Photo courtesy of the restaurant.

My ribs were overdone in two senses of the word. They were overcooked. Not disastrously so, but enough to dry them out a bit. (I only know one rule when it comes to ribs: they can be blackened, but they’re not allowed to be dry.) And they were also, to my tastes at least, way over-seasoned. It seemed like the chef had spiced them, then cooked them, then basted them, then grilled them, and then spiced them some more. All of which does not sound like an unreasonable process, but the spicing was so thick that it had the intensity of biltong. It was overbearing. And the chef had sprinkled a liberal amount of dried chili on the pile for good measure.

I kind enjoyed them anyway. They went very well with a Jack Black IPA.

Max would not touch his Chicken Rock ’n Roll because the avo had “stuff on it” – mayonnaise and black pepper. But it looked edible to me. That is, if a chicken breast is your idea of a good time.

I had asked for some take-away boxes when Michele pointed past my shoulder and said, “Uh-oh.” 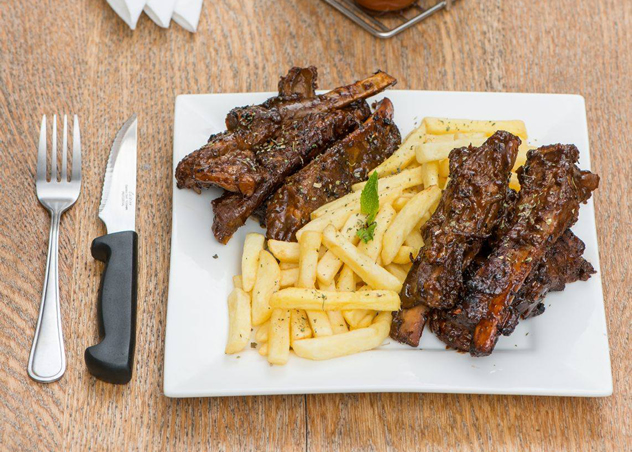 Ribs and Chips at The Warthog. Photo courtesy of the restaurant.

I turned around to see Max lugging a huge piece of wood out of the front doors. I don’t know where Max found this thing, but it must have been ornamental. There is absolutely no way that it would have fit in a fireplace. I ran to him before it could slip from his grasp and land on his toes.

“Um take a thtick,” he lisped.

“Where are you taking it?”

He looked at me like a coal miner who’d been stopped half way through his shift to explain the petroleum extraction process. 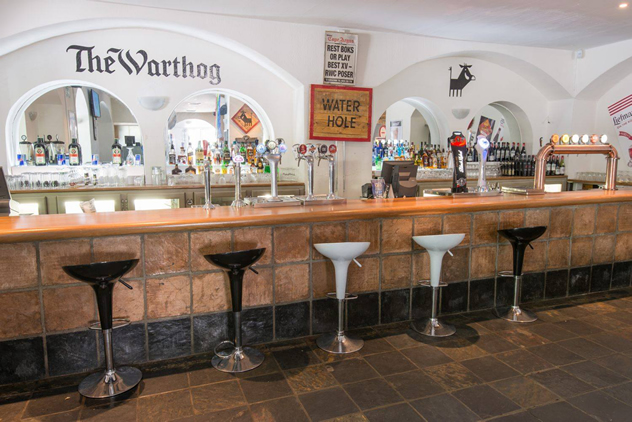 The bar at The Warthog. Photo courtesy of the restaurant.

I probably won’t be able to coax my wife back to The Warthog anytime soon. But for an afternoon of rugby with some mates, you’ll have ample parking, a table directly in front of a television, eager service, and ribs that go particularly well with an India Pale Ale. What more could a middle-aged, brow-beaten, rugby-deprived father of the world’s craziest two-year-old want?