Slap vs. crispy: the battle of the French fries 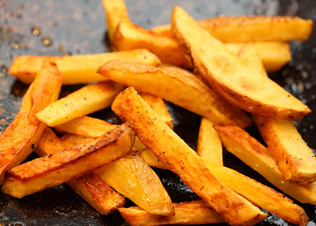 When it comes to the French fry, is crispy really the pinnacle of perfection? Or is there a place for the slap tjip? We set out on a daring mission to investigate that glorious execution of carbohydrates and saturated fats: the chip.

Slap vs. crispy
“The default for chips should be crispy,” says Linda Scarborough, our copy editor. Crispy on the outside and soft and creamy on the inside seems to be a popular choice, but some are more insistent on the point than others.

“This one is particularly flaccid,” says Heston Blumenthal, in an episode of How to cook like Heston, holding up the offending chip, which droops sadly. “The antithesis of what the perfect chip should be.” Heston’s recipe for thrice-cooked potato chips is probably one of his most famous, and thanks to his clout, he’s convinced a large percentage of the world of the superiority of crispy chips.

“It depends on what you’re having it with,” counters Eat Out editor Abigail Donnelly. She’s happy to eat her chips slap, with extra vinegar, when she’s tucking into fish ‘n chips. But a succulent steak requires a crispier candidate. “A golden crunchy outside and soft and buttery inside,” she says, going slightly glassy-eyed.

I’d also argue in defense of slapness for the chip roll, and, dare I say it, the gatsby.

Then of course, there are cheesy chips. In Cape Town, Clarke’s turns out an epically calorific dish called Marcel’s tomato ragout and magical cheesy fries. “It comes from a recipe I found on Serious Eats, the ultimate mega-site for US diner/trash/awesome food,” explains owner Lyndall Maunder. “It’s got gangs of cheese, ideal milk and cornstarch, which gives you kind of a Melrose cheese result.” Served atop former chef Marcel’s ragout and Clarke’s twice-fried chips, and then grilled, it’s a pretty convincing argument for flavour over crispness.

Then there’s the mystery of the sweet potato chip, which, for some reason, is eternally limp. According to Marthinus Ferreira, chef at Top 10 restaurant DW Eleven-13, this has to do with the sugar content. In ordinary chips, you want a potato with a relatively low sugar content. “A good quality chip will take at least 10 minutes to brown,” he says. Chips with a higher sugar content will burn – or become rock hard – before they’re cooked through. Hence the unavoidable sogginess, or rock-hardness, of the sweet potato chip. Perhaps slapness is excusable here, too.

But enough of this shilly-shallying, let’s settle this once and for all.

The perfect recipe
For the ultimate chip, I’m advised it’s best to go to Belgium, where the delicacy was purportedly invented. According to the Wall Street Journal they also boast the highest per capita consumption of fries. (Though this amazing The Sun article, about a British girl who eats only chips and cheese, is probably my favourite piece of journalism on the subject.) But as far as specific recipes go, Heston Blumenthal’s thrice-cooked version certainly holds the most ascendency.

The celebrity chef goes to great lengths to ensure crispness: rinsing off excess starch for five minutes, blanching his chips in water, then freezing them for an hour to remove moisture, and finally, twice frying them. Even vinegar is distributed through an atomiser to prevent sogginess.

Closer to home, Marthinus Ferreira is credited with creating some of the best crispy chips around. “We can’t take them off the menu,” Marthinus assures me, when I call to check he’s still serving them. His method is similar to Heston’s: boiling them until completely soft, refrigerating them, frying at a low temperature, refrigerating them again, and then frying finally at 180 degrees.

George Jardine of Jordan in Stellenbosch uses the same method, but blanches his for a shorter time, and does the first frying at slightly higher temperatures. And he’ll defend his chips to food snobs, who are puzzled as to why they’re being served in a Top 10 restaurant.

Other names that keep cropping up during my research include takeaway restaurant Chippies in Cape Town and HQ, both of whom, it emerges, use a thrice-cooking method.

Steve Maresch of The Local Grill is another popular vote. Steve serves a 4mm shoestring fries that are hand-sliced with a mandolin and blanched before being fried. Potato perfection is serious business in the steakhouse game. “We are constantly challenged by the type of potato and the SG (specific gravity) which influences the result of the chip,” Steve explains. (Don’t worry, we had to Google that too…)

Pimp your chips
Apart from the purists, it seems there are several restaurants doing interesting things with the humble potato chip. 9th Avenue Bistro in Durban offers beef-fat fried spuds seasoned with rosemary salt with their fillets, while at 96 Winery Road in Stellenbosch, you can upgrade your fries to ‘posh chips’, which are sprinkled with truffle oil and grated parmesan. At Orphanage Cocktail Emporium in Cape Town you can get your French fries sprinkled with truffle oil and served with a wasabi aioli, and we reckon Reuben’s truffle-parmesan fries with smoked barbecue sauce are probably pretty special, too.

Nationwide
Steers received the most votes from our readers, with a small but loyal following for McDonald’s shoestring fries.

DW Eleven-13
Chef Marthinus does the country’s best chips, according to basically everyone that’s had them.

Ritual Café
Pair your chips with a craft beer at this Sandton hotspot.

Clarke’s
For a real calorie hit, try the cheesy chips.

HQ
7mm fries, thrice-cooked and served in café de Paris butter (made according to a secret recipe with 17 ingredients).

Lusitania Fisheries (on the fanwalk)
Over fifty years old, this is an excellent takeaway for slap chips doused in vinegar.

Rambling Rose (Montagu)
Twice-cooked chips – crispy on the outside, and soft in the centre.

Vasco de Gama
Rough and ready it may be, but the chips are killer.

Delfi
Hand-cut chips taste even better when dipped in sauce from Maria’s prawns.

House of Curries
For slap chips worthy of kings.

Have we missed your local favourite? Mail us at info@eatout.co.za and we’ll investigate.