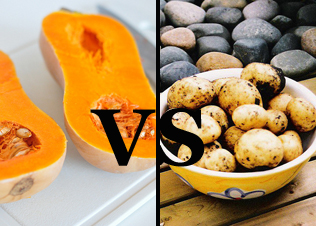 It started out as a fairly innocent question: what is South Africa’s favourite vegetable? The playing field started out fairly wide – mielies, mushrooms and onions made the long list – but after a little research, we whittled it down to two contenders: the butternut and the potato. To prevent an unprofessional wrestling match, Anelde and Katharine agreed to a sophisticated debate. Ladies, defend your vegetables.

Appearance
First up, butternuts are easier to draw. Don’t believe me? Try drawing a potato. What’s that you have there? A ball of Prestick? A blob? Now try drawing a butternut. See how much more decisive its shape is? And how many knitting patterns have you seen for potatoes online? Secondly, orange is a great colour. In Buddhism, it is the colour associated with the highest state of perfection. It is also the colour of the best flavour of jelly tots, cheese and Ronald Weasley’s hair.

Storage and longevity
Butternuts have stamina – they can last up to three months, if stored in a cool, dark place. Plus, unlike potatoes, which smell like rotting garbage when they go off, butternuts grow old gracefully.

Ease of preparation
You need to buy a good, sharp knife to get the job done. Cut the butternut across the middle so you have two flat bottoms to balance on your board, and then use a knife, rather than a peeler, to slice downwards to remove the skin.

Versatility
When it comes to versatility, butternut is the Johnny Depp of vegetables. It can be savoury or sweet, crispy or soft and hot or cold. It works equally well with herbs like sage, like in this gratin, thyme, marjoram or rosemary, and spices like cinnamon, ginger and nutmeg. Butternut is the key ingredient in the best kind of soup, butternut, and lends sweetness and a meaty texture to otherwise bland salads. It’s totally moreish in risotto, with plenty of parmesan, sour cream and sage, and has enough meatiness to work in lasagna, ravioli or gnocchi. You can even use it in cupcakes, like these spiced butternut squash cupcakes with maple cream cheese frosting.

The seeds are edible too. Rinse them off and roast them in the oven for 15-20 minutes with a little olive oil, salt and rosemary for a quick snack.

Taste and texture
Can you imagine a potato-flavoured anything? Butternuts have a sweet and nutty flavour profile of their own. As for texture, they’re firm and silky when roasted, velvety when puréed in soup, and crisp when cut ultra-thin and made into root vegetable chips.

Nutrition
High in fibre, alpha- and beta-carotene, butternut has also been found to have anti-inflammatory, anti-diabetic and insulin-regulating properties. One cup of butternut also has more potassium than a banana; which is great for building bones.

Wildcard
According to Google Trends, a system that tracks what people search for online, South Africa has the highest density of butternut-related searching around the world, with a search index of 100. Potatoes, meanwhile, score a measly 43. (Technically, if you put the two on the same graph and compare SA’s searches, this happens, but don’t tell Anelde).

Appearance
The potato is not the most attractive of vegetables. It doesn’t have the fashionable flash or purple of beetroot, the aerodynamic shape of leeks nor the flourishing florets of broccoli. But it has an inoffensive shape and very practical shades of brown, ivory and yellow. It’s adaptable, and allows its accompaniments to stand out. Aforementioned leeks should be eternally grateful to potatoes for allowing them to be the star of potato-and-leek soup.

Nutrition
Fair enough, potatoes are one of the first foods to be removed from weight-loss eating plans, but they are an excellent source of vitamin C and vitamin B6 and contain more potassium than bananas.

Storage and longevity
Under the right conditions, potatoes can last for months. Brush off excess dirt (but don’t use water!), remove those with broken skins, and store them in cool, dark, airy space, away from fruit. Not very sociable pre-cooking, our friend the potato. If any of them dare show signs of procreating or trying to break free, they’re ready to be used as a starter in your vegetable garden. See, useful even when inedible.

Ease of preparation
You don’t have to cut or peel a potato before cooking it. But if you have to, there’s this nifty kitchen tool called the potato peeler – easy to use for cooks of all ages and levels of experience. This tool is small, affordable, and not to be confused with a peeler for buttern… Oh, wait. There is no such thing as a butternut peeler! So really, there’s no contest when it comes to ease of preparation. And we haven’t even started on the cooking part.

Versatility
Water, stock, cream, butter, oil – all lovely mediums for potato cooking. And by cook, I mean bake, boil, braise, braai, fry, roast and steam. After cooking, the options multiply: mash, dice, chop, grate, layer, liquidise etc. This veg can be served hot or cold, in soups or salads, as the star of the show or the side dish. And it’s brilliant in pies (see this autumn harvest potato and mushroom pie and this cheesy celeriac, potato and bacon pie).

Taste and texture
Potatoes are not so great raw, but super amazing cooked, regardless of the cooking method. There is something incredibly comforting about a simply boiled floury potato with a dollop of butter and a pinch of coarse salt. Buttery, nutty goodness. The potato is happy to share a plate with all meat, poultry and most fish, and is a remarkable vehicle for a number of sauces and stews – like Reza Mahammad’s chicken with apricots and potato straws.

Wild card
NASA officially recognises potatoes as the coolest veg in the universe. Okay, maybe not officially, but they did plant it onboard the shuttle Columbia in 1996, making it the first ever food to be grown in space. Take that, butternut!