‘Old’ should never be confused with ‘age’. Some things actually improve with time. They don’t get old; they get better.

That is a truism befitting the Boschendal estate. Throughout its rich history, Boschendal has flourished. The older it gets, the more the terroir improves, the vines mature and the wine gains dimension. Boschendal therefore intends to celebrate its 330th birthday in style, with the release of commemorative limited edition wines.

The estate was originally granted to French Huguenot Jean le Long in 1685 by Simon van der Stel, the first governor of the South African Cape Colony. Boschendal passed into the hands of Abraham de Villiers in 1715 and remained in that family for 164 years. The De Villiers family developed Boschendal into a flourishing wine farm and built the magnificent manor house.

Boschendal’s winery building still contains sections of the original cellar built in 1795, and although the winemaking philosophy considers the estate’s tremendous natural heritage first and foremost, the vision is to balance 330 years of tradition and experience with contemporary innovation to produce classic wines with measured modern new world attitude that are uniquely Boschendal.

“There is no growth without innovation, which is born from experimentation,” says red-wine winemaker Bertho van der Westhuizen. “Our use of wood is judicious, allowing the wines to reflect the true nature of the fruit. Extended maturation periods give our wines the time they need to shake off their tempestuous youth and really come into their own.”

In 1897, custodianship of Boschendal passed into the hands of the mining magnate Cecil John Rhodes, who saw a lucrative opportunity in fruit farming. Rhodes Fruit Farms was established and began exporting deciduous fruit to Britain on a large scale. In 1976 the beautifully restored Boschendal farmstead and winery was opened to the public for the first time and began to emerge as the icon it is today.

With its backdrop of sweeping mountain ranges, deep ravines, imposing peaks and sun-baked rock, Boschendal is renowned throughout the world for its beauty.

The farm is within an area of such significance that botanists have named it a kingdom on its own – the Cape Floral Kingdom. A major feature of this diverse ecosystem is the fascinating multiform low-growing vegetation known as fynbos. The visual and aromatic prevalence of the various shapes and forms of this hardy vegetation inspired the iconic flora capensis symbol in Boschendal’s logo. 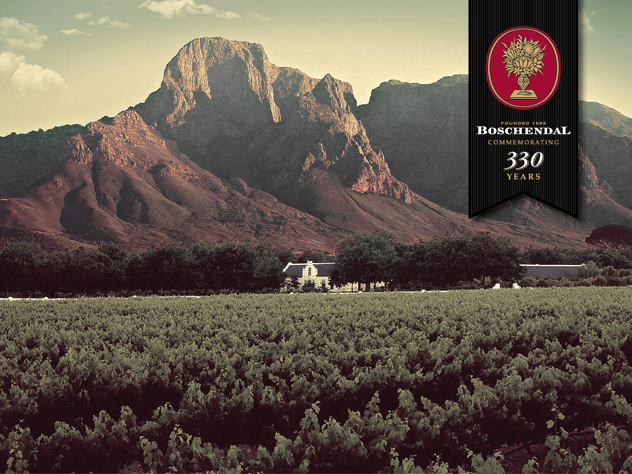