Which supermarket makes the best doughnuts? A blind tasting 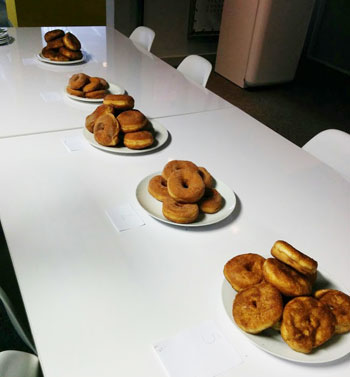 It was several years ago now that some trends analysts first declared the ascendancy of doughnuts. At the time, we were sceptical. Doughnuts were decidedly low-brow – the cheap office snack beloved of the software developer and the on-duty policeman. We tentatively investigated: nobody was doing anything particularly exciting with doughnuts in South Africa. But we had not reckoned on Instagram. We had not reckoned on the viral power of Facebook. Spurred on by the success of Freakshakes, doughnuts have become increasingly insane in recent years. People have loaded them with Nutella, they have served them as wedding cakes, they have speared them with syringes full of glitter. After this last atrocity, we at Eat Out said ENOUGH. We wanted to return to a simpler time. We wanted to eliminate choice. We wanted to eat cinnamon doughnuts.

And so, we pitched an idea: we would have a blind cinnamon doughnut tasting to compare doughnuts made by major supermarkets. The idea was approved. A meeting request was sent, and accepted unanimously.

The morning dawned cold and foggy in Cape Town, as our intrepid online editor set out to buy doughnuts. She arrived laden with boxes, after visiting dozens of branches of supermarkets (it turns out cinnamon doughnuts are harder to find than one might think). The table was set, the plates marked only with numbers, and the blind tasting began. 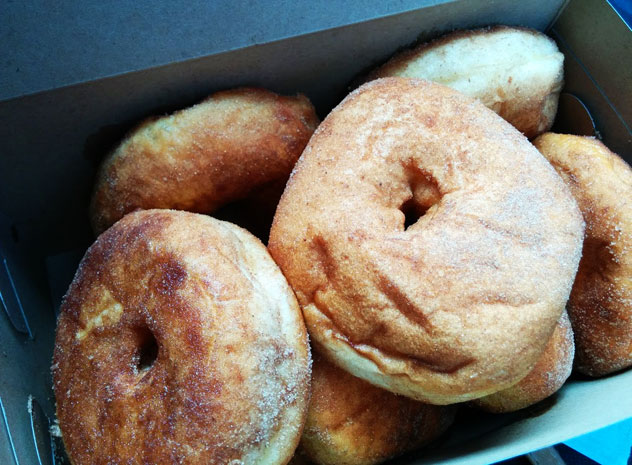 Coming in at number five, Pick n Pay’s doughnuts were well-seasoned. “I like the flavour, but they’re a little chewy,” said Carl, Eat Out software developer. It’s at this juncture that we realise the first limitation of our study: the doughnuts we’ve sourced are not of equal freshness – because supermarkets bake their doughnuts at different times during the day. They were nevertheless gone in 60 seconds. 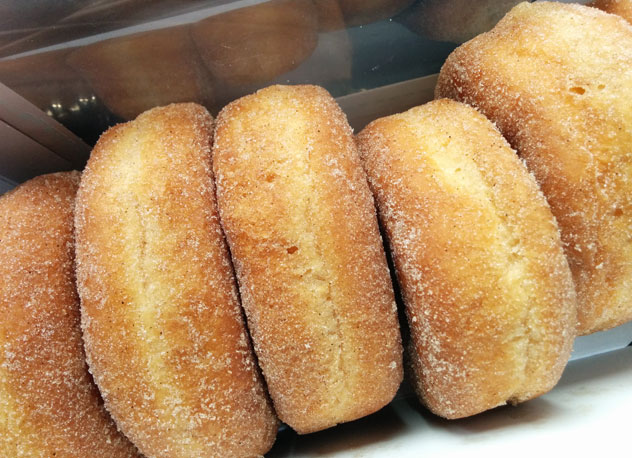 The Woolworths doughnuts were judged to be some of the most handsome. “They look fluffy, soft and golden brown,” said Zizi. “They taste like snickerdoodles,” declared Lindsay, referring to the wonderfully cinnamon-y biscuits. “They’re a little crunchy,” observed another taster, who somehow appeared from upstairs as the tasting began. (Perhaps we should’ve got them from a branch that had its own bakery.) 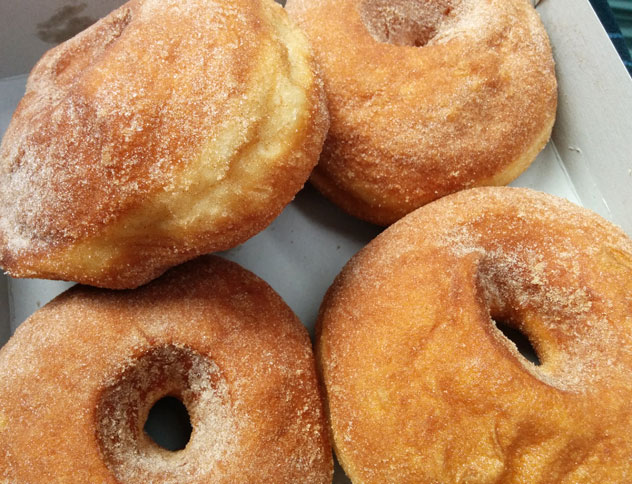 Coming in at number three, the vast Spar doughnuts were the largest of the doughnuts, and had a nice coating of sugar, according to designer Marcus. “They’re quite chewy, but have a good flavour,” said Linda. Another taster labelled these the “most doughnutty” of the doughnuts. (We’re not sure what that means exactly, and would ask the person, but they neglected to put their name on their score sheet. Perhaps they were not officially invited to the doughnut tasting…) 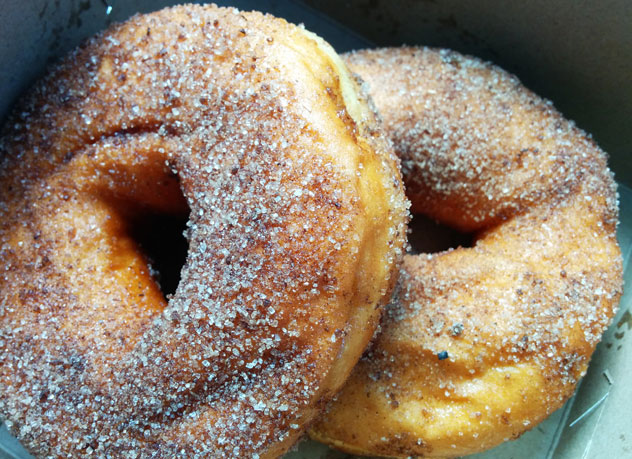 Tied in first place with Food-Lover’s market, the Checkers doughnuts were certainly the freshest. It seems Checkers doesn’t always make cinnamon ring doughnuts, but the helpful bakery will bake on request if you phone ahead – which is what we did, under a pseudonym. They were thus still warm when we picked them up. “This one feels really fresh,” noted our foremost doughnut scientist and software developer, Neels. “Beautiful spicy flavour and lovely springy texture, agreed Linda. “Nice and moist, too,” said Cailine. The sugar coating – a coarser grain – divided the jury. Some found it too coarse; others declared it nice and crunchy. “Do I detect a hint of lemon?” asked Carl. (There was indeed a hint of a cinnamon, sugar and lemon pancake about it.) 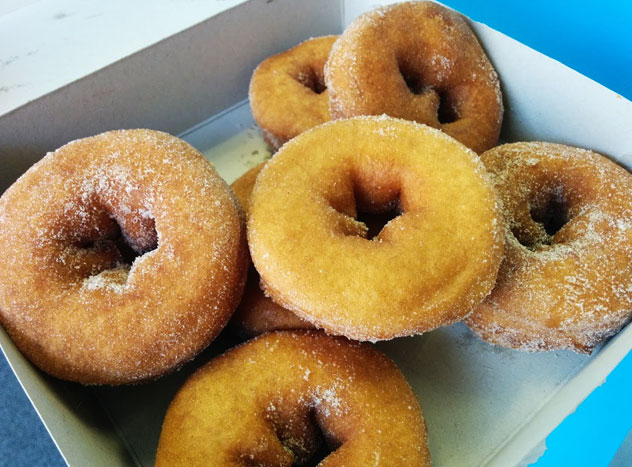 When the scores were tallied, the Food Lovers came in with an exact tie with Checkers, down to the decimal point. These doughnuts were the favourite of several of our tasters. “They’re moist, delicious, and there’s enough of all ingredients,” said Zizi. “They’re lighter and fluffier; not too sweet,” said writer Nikita. “They’ve got a great coating, and an open, springy texture,” noted Kelly. They were also a slightly smaller size – a more manageable option – particularly if you’re conducting a blind doughnut tasting. They might also have had a slight advantage – we had to wait for the batch, so they were pretty fresh out of the oven.

1.    The freshest doughnut is the best doughnut, so if you can, buy your doughnuts at a store with an attached bakery – or call ahead to find out when they’ll be ready.
2.    People are a lot more critical if you ask them to compare doughnuts. None of the individuals involved in this blind tasting has ever had a negative comment to make about doughnuts in the office – but when told to compare them, they instantly became far more discerning.
3.    If you conduct a blind doughnut tasting in an open-plan office, you will have more respondents than originally bargained for.