Junior: the new takeaway burger joint from the people behind El Burro and Royale 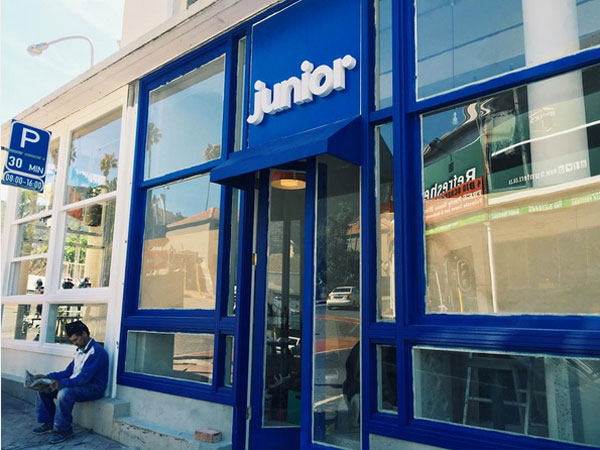 The hip little restaurant hub on the corner of Kloof Nek and New Church Street will get a new member on Wednesday when Junior opens next door to El Burro Taqueria.

The Royale team have been talking about opening up a second venue since 2005, Hugo reveals, “but Royale is this huge, incredible, magical monster, and trying to duplicate it was too daunting.” Instead, Hugo, along with with brother Sascha and Royale Operations Manager Simone Stevens dreamt up a new concept: a gourmet takeaway spot, which serves up takeaway-style burgers that are ingredient-conscious.

“Everyone wants takeaway fries and squishy burgers, and to be able to take it home to watch Game of Thrones, but processed food filled with all those preservatives, salt and sugar is no longer that appealing.” Junior’s burgers will be refreshingly home-made. Patties will come in fresh daily, and will never be frozen, rolls will be baked on site, and potatoes will be chopped in-house to make the chips.

Whereas Royale fans may be used to having an immense choice of options, Junior’s fare will be much simpler. The menu will consist of just five burgers: a regular burger with lettuce, pickles, caramelised onion and Junior sauce; a cheese version; a double trouble, with two patties and two slices of cheese; a vegetarian burger; and a fish burger.

Confirmed. @_____junior__ make a kickass burger! Can’t wait for them to open later this week.

The menu will also offer milkshakes and both baked and fried doughnuts – which will change on a weekly basis. Right now, Hugo reveals they’re trialling a baked vanilla-and-Oreo doughnut with an Oreo vanilla glaze and a fried doughnut with a strawberry glaze. They’re also experimenting with a recipe for vegan doughnuts.

Decor-wise, the creators were inspired by the heyday of the Californian burger revolution in the fifties. And although the food may be less preservative-laden, the restaurant will replicate this kind of burger joint in all other respects. Seating will be on high stools, they will not take reservations, and burgers and fries will be served on a tray from the counter, not by a waiter.

That said, they do have a liquor license and Citizen’s new Patriot Light Lager on tap, so we predict punters may be tempted to stick around for a few cold ones – especially as the area is now becoming something of a hub with Rafiki’s, Hallelujah, The Power and the Glory and Kyoto Garden Sushi across the road.

*21 September 2015: this article was edited to reflect the fact the restaurant is not yet open for lunch. Watch this space for news of lunch time opening hours or follow them on Instagram, @_____junior__.