The Dog’s Bollocks at the Yard 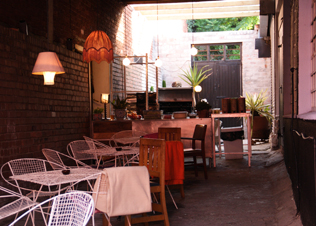 Technically, it’s not a restaurant. There are no waiters, no bills, and no drinks – save for the cardboard containers of wine. If we were really quibbling, I’d call it a driveway. But since it opened in October last year, this narrow gap between two buildings has been getting such rave reviews that it’s attained cult status in Cape Town. We headed there to taste whether Nigel Wood’s burgers really are The Dog’s Bollocks.

First off though, we have to find the place. Our intelligence tells us it’s off Buitenkant Street, on Roodehek. After a couple of trips down the road, we spot it: a blackboard menu outside and the twinkle of light from a couple of old-fashioned lampshades.

“It’s take-away, but if you like, you can take it away to the tables and chairs over there,” owner and sole employee of The Dog’s Bollocks, Nigel Wood, explains as we wander in down the narrow alley.

The food
A simple blackboard menu offers burgers, and only burgers. Yes, that means you don’t get chips. Ranging from R50 to R55, there’s everything from a plain po boy to a jalapeno cheese, and the old-school 1950s-style mega slider. They are served wrapped in a piece of newsprint, sans cutlery.

“Take some of these; you’re going to need them,” Nigel tells us as he hands over a fistful of napkins. It’s easy to see why. In order to get our mouths round the burgers, which are at least 30% larger than your average hammie, we’re going to have to get dirty.

Pretty soon, we both have sauce dripping down our elbows, face and shirts. The pepperberry blue (blue cheese and pepperberries – Nigel’s moniker for sweet piquant peppers) and the Mexican chocolate mole (dripping with spicy, chocolaty sauce) are worth it, however. The sauces are incredible, the patties soft, succulent and delicious – Nigel makes them himself from meat supplied by Sacks – and the lettuce and tomato fresh and crunchy. Altogether, it’s one of the best burgers I’ve ever had.

The mood
Remember those white wire garden furniture sets from the eighties? The ones that gave you waffle-bum? Pair them with chintzy lampshades à la antique store, some cactuses and a concrete driveway and somehow you’ve got a pretty cool ambience.

The people
Pony-tailed Nigel Wood is the owner and sole employee. A veteran of the restaurant trade (he owned several restaurants in the UK before turning out seriously good burgers here), Nigel has a relaxed, no-nonsense manner, which has got to be part of the reason this place is so popular.

The wine
Multi-talented Nigel is also the man behind the trendy U-Tubes from Ukuva iAfrica: 1.5 litre cardboard tubes of wine. Although you can’t buy wine by the glass, Nigel will lend you one if you purchase a tube. We select a tube of white, which is not half bad, thanks to a few chunks of ice from clever fellow diners who had picked up a bag from the petrol station around the corner.

The verdict
A must-visit. You’ll leave with a feeling of wellbeing that only being covered in burger sauce can provide. You can’t book a table, so simply make your way to 6 Roodehek Street (off Buitenkant) between 5pm to 10pm from Monday to Saturday. Nigel only makes 30 burgers a night – “a limited edition” – he says, so get there early if you don’t want to miss out. A final word of warning: don’t go there on a first date (watching someone else devour one of Nigel’s burgers is not a particularly sexy sight) and heed Nigel’s advice: take plenty of napkins.