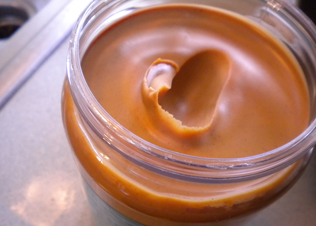 Remember when peanut butter was nothing more than a store cupboard standby, like golden syrup and fish paste? (And remember that ad where the Black Cat kid triumphs over the bully?) Today, the humble nut butter has risen from school sarnie status to a gourmet ingredient: it’s as at home on a satay, sundae or sticky finger as on toast. Then there are the crazy cats making peanut butter cheesecake brownies, chocolate peanut butter pretzel doughnuts, and honey-roasted butterscotch white chocolate peanut butter. (Yes, really.) But how did it gain superstar status?

They say the first clever ones to mash up peanuts into a paste were the Aztec Native Americans. (It was probably painted in a cave, with peanut butter.) In the 1800s, the Canadians started to make roasted peanuts into a creamy lard, and from there it spread to America faster than you can say “smooth or chunky?”. But what was it that triggered this current wave of peanut buttery goodness?

Peanut butter nostalgia
One theory is that the sudden enthusiasm for Skippy comes from the on-going trend towards food nostalgia.

Trends analysts first began predicting a move towards nostalgic foods in 2009, when biscuit sales first soared as the recession drove people towards comfort foods. Every year since, a new comfort food has its turn in the spotlight. First there were cupcakes in every flavour under the sun, then burgers, then hot dogs, ice cream and milkshakes.

“Peanut butter is the paté of childhood,” says writer Florence Fabricant. It is the familiar comfort food that you would’ve had it in your lunchbox at some stage in your life, probably drenched with golden syrup or smeared with bright orange apricot jam – or even honey, if you had an adventurous mom. If you could wait until break time to peel back the wax paper you might even have that slight crustiness of crystallised sugar.

Australian-born Brit Dan Lepard is one famous baker who’s taken advantage of this tendency. “One of my cooking approaches is to combine adult and child flavours,” he says. “So something like peanut butter and whisky [will] tickle people’s interest”.

Blame the yanks
Looking back at the list of food revivals, it’s clear that most are American inventions. America has always had a huge influence on food trends globally. In South Africa in particular, where we’ve been exposed to a lot of US fast food, plenty of us still hanker for a chocolate milkshake and a bit of the Colonel when the going gets tough. The US is, of course, also responsible for Reese’s Peanut Butter Cups and National Peanut Butter Day (24 January). With $850 million in annual peanut butter sales, it’s probably safe to say that they love it more than any nation on earth.

Alarmingly, though, the Americans’ latest craze is a P&PB – that’s a pickle and peanut butter sandwich, according to the NY Times. One thing’s for certain: each nation has their own approach to the nut butter. Brits tend to smear on a layer of Marmite and the Aussies to do a similar thing with Vegemite. Elvis enjoyed his with bacon and banana, and Hemingway with thick slices of onion.

The celebrity chefs
Celebrity chefs have also had their role in driving the rise in peanut buttery goods. Back in 2005, when Gordon Ramsay opened his first Maze restaurant in London, he wowed patrons with his peanut butter and cherry jam sandwich with salted nuts and cherry sorbet. Head chef Jason Atherton remarked: “I wanted to take things that people know from American culture, like peanut butter and jam sandwiches, and play with it. It’s proved a big hit.”

Nigella, too, has been championing peanut butter for years. She loves to keep things simple (read: from the kitchen cupboard) yet a bit OTT, so that’s why her peanut butter cheesecake is, in her own words, “unashamed indulgence”. Her peanut butter hummus and chocolate peanut butter fudge sundae are both lip-lickingly good.

Got a serious case of peanut butter munchies right now? You don’t have to look far to run into something scrumptious from the peanut family. Try blogger Sarah Graham’s fire-roasted butternut smothered in peanut butter at home or Abigail’s recipe for peanut butter oat slices.

I want it now! Where to taste delicious peanut buttery dishes

Fire and Ice in Cape Town
Munch on: burgers with a peanut butter sauce.

The Creamery (one of our favourites) in Cape Town
Munch on: PB ice cream with a slight kick of sea salt.

+27 Café in Pretoria
Sip on: peanut butter and Nutella milkshake.

Gourmet Garage in Fourways
Munch on: a peanut butter burger.

We’ve also just heard that you can buy Black Moon Peanut Butter Vodka Liqueur. To wash down all the cakes, brownies and ice cream, of course.

And if you don’t think peanut butter can be pretty, take a look at The Peanut Butter Co.’s Nutropolitan Museum of Art!