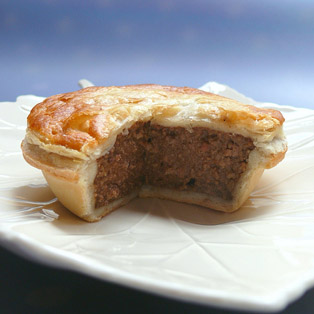 At the beginning of the year trendsetters forecast pies as the next big thing. And in bold style, it wasn’t long after that restaurateur Giorgio Nava opened Down South Pie Bar  in Long Street, with chef and partner Carl Penn who makes an array of daily pies.
While travelling up the east coast of Maine recently, we stopped at a typical diner on Route 66 that boasted shelves and shelves of pies. But the sweet variety – from rhubarb to peanut butter smothered in chocolate – were a taste sensation.
Late at night in Adelaide we would visit the traditional pie cart outside the casino for a legendary pie floater – a small beef pie on top of a bowl of pea soup!
In Noordhoek at The Foodbarn Deli, the perfect pies are dished up; get there earlyish as they get whipped up fast. So do the ones that Elize Goffe-Wood serves at KC Canteen in Woodstock. And then there’s Jason at Jardine Bakery, whose pork belly and apple pies kick ass!
The chicken pie at Bellagio in Joburg has to be seen (and eaten) to be believed – a whole pie comes to the table, all glorious puffs of pastry covering creamy chicken.
I wonder if there will be one or two pies on sale at the SAB Eat In Night Market at the Biscuit Mill next Thursday?
See you there!
Abigail