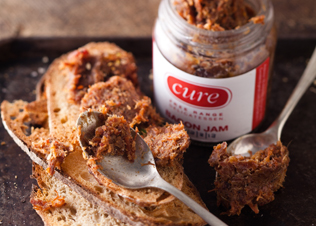 One-man bacon-making band Martin Raubenheimer of Cure Deli first created his revolutionary product in 2012. Working on the premise that everybody has a love for bacon but not enough time to eat it every day, he came up with the brilliant idea of a sweet, smoky bacon jam that you could keep in a jar. Spread onto hot toast, the fats from the pork melt and leave you with heaven in your mouth.

This bright idea is testament to why Martin walked away with the award for Best New Product at the recent Eat Out DStv Food Network Produce Awards. We caught up with the characterful charcuterer in the wake of the awards announcement at a special night market this past weekend.

“That all happened on Friday, but then reality hit about two hours later when I got home and had to pack for the Saturday market and be up at 5am. The accolade is nice, but at the end of the day we all work bloody hard!” he laughs. Fitting that he should say so, as it is precisely these long hours, the passion and the struggle of the small producer that Eat Out seeks to acknowledge with the awards.

The maple-syrup bacon used in the ‘jam’ is made from ethically sourced free-range pork that has been smoked by Martin himself, and then flavoured with onion, garlic, apple cider vinegar and coffee. The judges applauded the sweet meaty pâté, and reckoned that it was just the thing to satisfy South Africans’ sweet tooth and love of meat.

But bacon jam is only a tiny aspect of what he does, Martin tells us. About 60% of his sales at the moment are of his gluten-free hand-made bangers and sausages.

“A sausage is like a canvas – you can add anything,” Martin enthuses. He likes to listen to the seasons as much as possible, so sausages change every week, but flavours include pork with chestnut and pear, dry-roasted black and yellow mustard seeds with apple, and braised leek and sage, as well as a fresh chorizo, lamb with lemon zest, origanum and garlic, and a ‘real’ boerewors with dry-roasted spices.

“I like to play around with fruit – I might even steal a pomegranate off someone’s tree and put it in my sausage!” he teases.

So while Cure Deli stocks free-range chicken, lamb, beef and wild boar (when in season), pork is their mainstay. Unfortunately, pigs raised according to free-range principles are in short supply. So short, in fact, that Martin says that if he wants to grow his business drastically, he’ll have to consider getting into farming himself. The majority of his stock comes from Happy Hogs (on the Fountain Valley Farm), but there are very few other producers of free-range pigs.

Added to that is the fact that consumers aren’t (yet) prepared to pay a premium for free-range. Competing with supermarket giants is not the aim, but Martin is still working at changing people’s mindsets. “But it’s great that awards like this get people thinking.”

After studying copywriting and doing a stint of co-writing recipe books and conceptualising treatments for local food TV, Martin decided in late 2010 that being a butcher was what he wanted to do.

“When I was a little boy, my dad used to take me to this butchery in Diep River, and I was always fascinated by all the meat. My family has always been interested in food, if not from a so-called ‘foodie’ background.”

These days, his sister helps out at markets, and his mom lends a hand in the kitchen. “My mom is my right-hand man,” he jokes. “I’m one of those people that needs to bounce ideas off others, so I always talk everything over with her.”

Cure Deli doesn’t focus on supplying restaurants, so the target is the end user. Martin explains, “I deliver to you; you like it; and give me feedback. If someone says, ‘I enjoyed that’, after you’ve put your blood, sweat and tears into it, it’s so much more rewarding.”

I ask Martin where he gets his inspiration. “I like going to chat to people who know more than I do. I might go into a spice shop and ask questions. For example, masala is associated with Cape Malay cuisine, which is traditionally pork-free. But many of the spices in masala, like turmeric and fennel, go so well with pork! So I came up with a masala sausage with dried apricots and dhania.”

And he doesn’t spend a lot of time reading food blogs and recipe books. “I would rather take an ingredient and play with it to make something new – not follow someone else.

“That’s what keeps you on your toes.”

Eat Out editor Abigail Donnelly recommends that you use a dollop of this smoky, sweet bacon jam inside a cheddar jaffle cooked on the braai, or spooned into a piping hot baked potato. It’s delicious on beef burgers with mashed up spicy avo, or dotted in a bowl of creamy potato and leek or cauliflower soup, and it would take a croque monsieur to another level.

Alternatively, you can find Bacon Jam on the menu at Truth in the Cape Town city bowl, or at The Larder in Diep River.