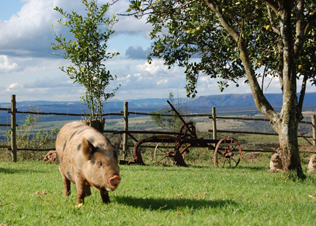 While Richard Haigh and David Brennan of Enaleni Farm in Pietermaritzburg, winners of the Heritage category of the 2013 Eat Out DStv Food Network Produce Awards, were pleased their eye-catching zebra beans received so much attention, it’s their pork that makes them particularly proud.

But why the pigs, and not their orchids, herds of endangered Imvu sheep and Nguni cattle, or GMO-free indigenous crops? “Because our pigs really showcase our ethos of farming with compassion, and what it means to be a farmer,” Richard tells me over the phone.

Compassion is not a common phrase in farming circles, but Enaleni is not a common farm. Rather, they have labelled it agro-ecological, which means that all the species on the farm complement the environment, and vice versa. (Their previous win of the heritage category at the 2011 SAB Eat In Awards attests to this.)

Balanced animals
Enaleni’s kolbroek pigs are free-range – less than a handful of South African pork farmers keep them company in this category – and the animals enjoy real quality of life. But what’s interesting about the kolbroeks, from a breeding perspective, is that they’ve been around for hundreds of years. They are unselected, genetically speaking, and boast hardy characteristics. When animals are bred for specific traits, they stand to lose others, Richard explains. “For example, if I select a breed for udder size or milk production, then I might inadvertently lose on fertility. The kolbroek pigs haven’t really been tampered with, so we have a more balanced animal.”

Another aspect that Richard feels strongly about is artificial insemination. He says this (wrongly) puts genetic resources in the hands of companies and, because multiple farmers use the same boar for all their sows, it reduces the genetic variation between the animals. “It’s not good for agriculture, nor is it in the interest of the pigs,” he insists.

At the moment, Enaleni has 48 pigs: five breeding sows and two boars, offering three bloodlines. The piglets are farrowed on hay and are weaned at around two and half months (6 weeks). They range out in the day, but the younger piglets are brought in at night for safety.

The free-range difference
Shockingly, there are over 60 000 sows that farrow in crates – metal cages – in South Africa, according to Richard. They can’t even turn around. This stops them smothering their young: profit margins for piggeries are quite low, so breeders do what it takes to ensure every piglet survives.

“One could argue that under those conditions, pigs lose their natural instincts to protect their young ones. But we want our pigs to reconnect to nature and to their own instincts,” says Richard. He was amazed to discover that his pigs were building nests when preparing to give birth, collecting dry grass, roots, leaves and branches to keep the new-born piglets warm.

This may sound quite idyllic, but practically, farming free-range pigs is very difficult. Without enriched commercial pig feed, hormones and antibiotics, free-range animals grow slower and farmers have to keep them – and feed them – for longer. There’s also a land issue, says Richard. If you’re free-ranging, you need a bigger area.

“Nevertheless, I think it’s wonderful that we can present an alternative to industrialised farming. The pork tastes good; the pigs have a quality of life and are slaughtered humanely. I transport the pigs myself, and within an hour of arriving at the abattoir (which is only 14 kms away) they are slaughtered.” In many larger abattoirs, the animals spend the last hours of their lives stressed and hungry if they are delivered early, or if there is a backlog.

Conservation through production
Richard and Dave believe that conservation of endangered and indigenous farm breeds can be achieved through production. This allows people to see that these animals are viable for farming. Therefore, for the second year, the Enaleni team has presented pigs at the annual Royal Show in Pietermaritzburg. “We have seen incredible interest; a lot of people have bought pigs for breeding.”

Their appearance at the show demonstrates that the breed is manageable in size and has a good temperament. “Although we had one pig eat a child’s ice cream,” laughs Richard. “It’s about making a connection with people. They’ll walk past and say, ‘Ah, these are cute!’ and I say, ‘Yes, and they also taste good!’”

Food for thought
This focus on the relationship between the animal and its environment has another, more practical, purpose: flavour. Enaleni free-range pork can only be in high demand – and it is – if it tastes amazing, too. The meat is dark, with fat marbling; it sells quickly, and first-time customers almost always become regulars.

Richard says they sell pork through a mailing list online at R55/kg, and only half a pig or a whole pig at a time, because “people must experiment!”

Enaleni is, however, starting to produce sausages and ham, and they also host pop-up dinners and events on their verandah. “We love the idea of offering people food that’s raised here, celebrated, transformed and eaten here – so it almost doesn’t go off the farm,” enthuses Richard. “You can eat local and you can tell the story. It’s not a theory or some abstract idea – it’s a taste sensation and real food for thought.”

Speaking of which, what is the best way to enjoy the pork? Lacerate it and press in some fennel seeds before slow-roasting, says Richard.

“We find, with the meat, that the trick is to cook it slowly. But you eat it fast!”

Visit www.enalenifarm.co.za, phone 082 872 2049 or send a message to? enalenifarm@gmail.com for more information.