The inaugural FOOD XX Symposium and Awards in partnership with Eat Out took place on 12 February 2019. The Awards celebrated women in the food and drinks industry in South Africa in 15 categories, going beyond the kitchen to include recognition for farmers, food stylists and fresh voices in food media. Its focus was on giving back, sustainability and the future of food.

REPOST: “Only 13% of the head chefs in top South African restaurants are women," states @fxxd_xx, a new platform and movement by food designers @studio_h_. FOOD XX aims to deliver empowering content for women by women in the food and drinks industry in South Africa. Their inaugural symposium and awards will take place on the 12th of February in Cape Town.” Head over to @thedifd to read more. ?: @alixrosecowie . #FOODXX #Womxninfood

FOOD XX was started by food designers Studio H as a platform and movement that delivers empowering content for women by women in the food and drinks industry in South Africa. The Awards’ focus is on celebrating women across the food industry, in part as a response to previous exclusion or tokenism of women in industry competitions and awards shows worldwide. Founder Hannerie Visser says, “The whole idea about FOOD XX is that we talk about current injustices and find solutions together, whilst simultaneously redressing exclusion and tokenism of women in the past.”

Chef, restaurateur and cookbook author Karen Dudley of much-loved The Kitchen in Woodstock won the In the Kitchen award for her wholesome, plant-forward, flavourful food that has created a loyal community in Cape Town. The Front of House award went to Gosia Zielińska, sommelier at The Pot Luck Club. Nikki Albertyn of thriving patisserie LionHeart was awarded the Bakers award, and Lucy Beard – distiller and co-founder of Hope on Hopkins – won the Alcohol award. The Secret Ingredient award went to Brigitte Lilley for her work at the ever-popular Jason Bakery.

Only 2 more days until @Dining in The Kitchen! We look forward to hearing from Backsberg's 4th generation owner and CEO, Simon Back, as he personally presents the wines poured on the night. Ticket link in our bio #karendudley #thekitchen #dininginthekitchen This picture by the amazing @clairegunnphoto … prepare for my new book launching later this year!

In media, the Food Styling award went to food artist Caro De Waal and the Burger King Fresh Voices award honoured freelance food and culture writer Ishay Govender-Ypma for her work on the intersection of food, culture, justice and representation.

The Woolworths Farming award went to third-generation beekeeper Mokgadi Mabela. Though most honey on South African shelves is imported, Mokgadi’s business, Native Nosi, proudly harvests local honey as an alternative. The Heritage award was shared by Mpho Tshukudu and Anna Trapido, who worked together on Eat Ting, a cookbook highlighting indigenous African superfoods for health.

The Spier Sustainability award went to Roushanna Gray of Veld and Sea, for her efforts to highlight our local edible plant culture and to educate people on foraging. Zayaan Khan – a South African coordinator for the Slow Food Youth Network and an expert on entomophagy (the practice of eating insects) – was awarded the Woolworths Future Food award.

The Krone Entrepreneur award went to Hilda Adams. Her business, Weskus Mandjie, offers local women in the fishing village of Mamre the opportunity to make preserves and other homemade products. Alix-Rose Cowie, judge and editor of food magazine Chips!, said, “Hilda is a shining example of small-scale entrepreneurship changing lives. She’s found a way to market and monetise local knowledge and traditional crafts to empower women.”

Award-winning chef and Eat Out’s chief judge Margot Janse was honoured with the Woolworths Giving Back award for her drive to feed hungry schoolchildren in the Franschhoek area through her Isabelo project. The Food Educator award went to renowned chef Jackie Cameron for her mentorship of students at the Jackie Cameron School of Food & Wine in Hilton, KwaZulu-Natal. 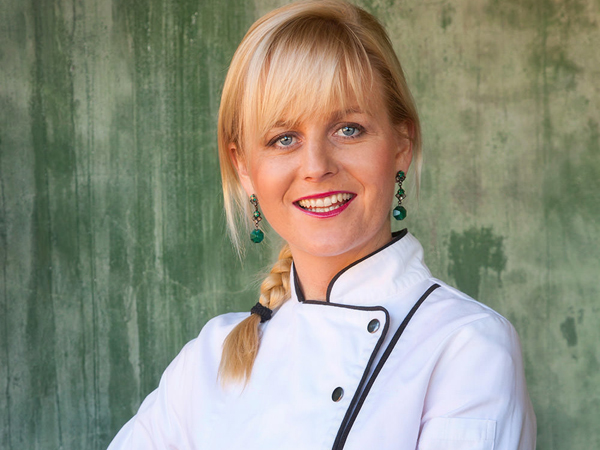 The winner of the Food Icon award was the inimitable Dorah Sitole, for her contribution to the food industry in the country. An African food expert, Dorah’s career spans 40 years as a cookbook author, food stylist, travel writer, and food editor of True Love magazine for over two decades. Judge and chef Mokgadi Itsweng said, “She is the first black food writer, mentor and mom to women in food all over Africa. She is the first person to introduce food as a career option to most of us; before her, there was nothing.”

In the Kitchen – Karen Dudley of The Kitchen