10 next-level things to eat in the USA

America is a big place. A lot of things there are larger than life: the cars are big, the parking lots are big, a medium bag of M&M’s candy is roughly the size of a new-born baby. It’s also home to a huge variety of cultures, landscapes and cities, and deciding which places to visit is almost as tricky as trying to decide which flavour of Oreos to buy: Banana split? Cookie dough? Peanut butter? The anguish! (Well, I didn’t go for banana split flavour, obviously.)

Tennessee Williams once said, “America has only three cities: New York, San Francisco, and New Orleans. Everywhere else is Cleveland.” In the interests of ticking off the biggest number of places on my bucket list in a single trip, I followed his advice, save for a brief detour to Georgia for a beloved cousin’s wedding, the culinary highlight of which was certainly the pineapple casserole*.

Aside from dinner at Eleven Madison Park (the best restaurant in America right now, according to these guys), here is my definitive list of the most next-level things to eat in the USA right now (in places that are not Cleveland):

The concept at this trendy James Beard award-winning restaurant is an unusual one: the waiters carry the dishes around, allowing diners to just point at things they want. Perched at the bar, I’m a sitting duck. I point at a luxurious duck liver mousse served with tiny almond friandes made with duck fat, and then delicate duck tortellini in an umami-rich broth. Next, I point at a silken ceviche with crunchy fried quinoa. And then I see it: a glorious bun topped with an oozing ball of burrata. “What even is that?” I whisper, as the chef in front of me plates a series of these golden brown beauties. They are, it emerges, knots of sourdough bread laminated with olive oil to create a croissant-like dough, and then deep fried, so that they’re crunchy on the outside and moist and soft on the inside. Sourdough-ssants? Sour-croiss-knots? Whatever they are, they deserve some kind of a medal.

2. S’mores with single-origin chocolate at Dandelion Chocolatiers in San Francisco 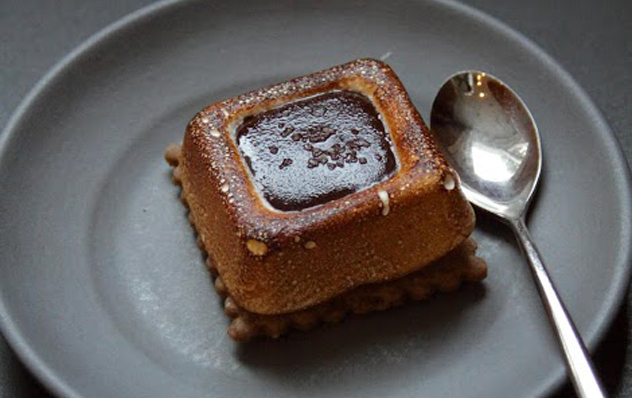 It’s around about 3pm on my first day in San Francisco that I decide it necessary to WhatsApp the Eat Out team. I’d been wandering through the artsy neighbourhood of Mission, exploring the thrift stores and design boutiques, when I came upon two things: a small-batch chocolate shop offering a brownie flight (made with three different single-origin chocolates) and an establishment offering cheese flights. “Wish you guys were here,” reads my gushing message. “Y’all would lose your minds.” I have a 7pm dinner booking to honour, but so as not to let down the team back home, I make room for a single s’more at Dandelion. Homemade Graham crackers, a puff of marshmallow caramelised with a blowtorch, and the most sublime chocolate I’ve ever tasted: it genuinely feels as if I’m having an out-of-body experience. 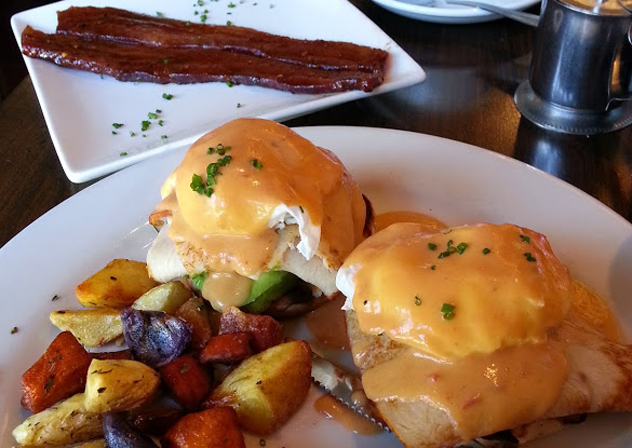 What makes it “millionaire’s”, you ask? Unreasonably sweet, it’s baked with brown sugar, cayenne, red and black pepper, and costs $7 for two slices. I’m not sure that I actually like it, but this is probably the only bacon I’ll ever eat that’s appeared on the Discovery Channel, so eating it falls into the same category as crossing the Golden Gate Bridge and visiting Alcatraz. I do it out of a sense of obligation. (You’re welcome.) 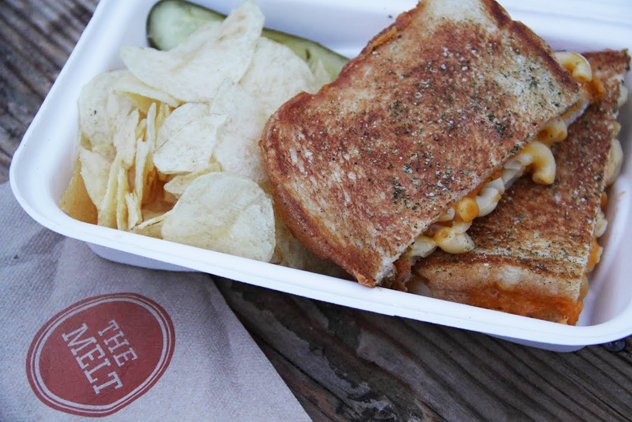 Located in the SoMa (South of Market Street) neighbourhood, this lively little park is home to a rotating roster of food trucks and live music. I order the macaroni cheese melt, because this is America, and there’s nobody to tell me that putting macaroni cheese inside a toasted sandwich is unreasonable.

5. A hidden soufflé at Dominique Ansel Bakery in New York 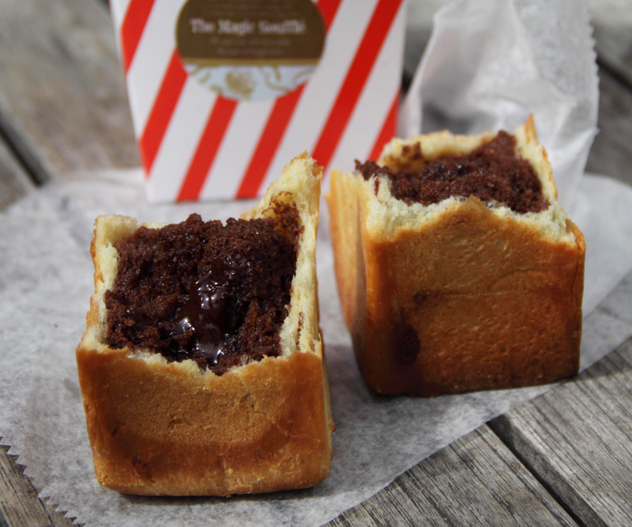 To be honest, I’m relieved that the cronuts are sold out at this famous New York bakery on the morning I make my pilgrimage. I haven’t yet recovered from the one from Jason Bakery last year. But I’ve come ten subway stops to get here, so the very least I can do is order one of the other famous creations: a hidden soufflé. It’s a soufflé baked inside a brioche. Strange, really, because why would you want bread if you could have chocolate soufflé? I peel off the brioche and eat the soufflé. As breakfasts go, it’s pretty next-level. 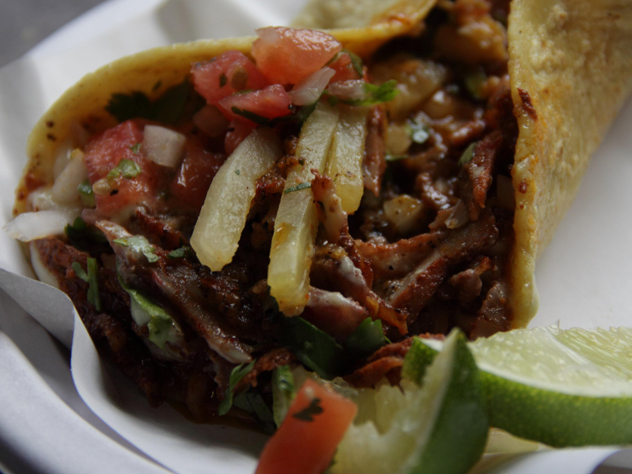 The most insanely delicious adobada (marinated) pork soft tacos from this authentic little stand made somebody’s ‘best taco of New York’ list. The marinated pork is succulent and tangy and finished off perfectly with a squeeze of lime. A rare moment of simplicity amongst the mania. 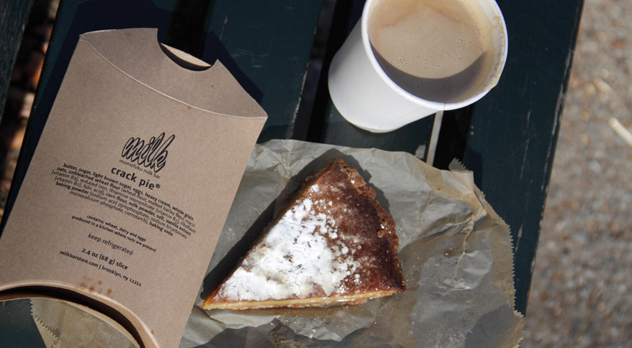 Even after eating this, I’m still not entirely clear on what crack pie is. It’s chewy and crunchy and soft – like a very firm milk tart – all at the same time. It’s absurdly sweet; I’m sure there’s condensed milk in here somewhere. I should in no way be eating this for breakfast. (An honourable mention also goes to the cereal milk soft-serve sold here. Made with a toasted-cornflake-infused custard, it really does taste like cereal milk and makes me feel instantly better about my breakfast choices.)

These creamy little croquettes make the perfect partners to the crunchiest sweet potato fries I’ve ever eaten. The soundtrack helps: the house band is performing a pretty killer jazz set, in which the musicians are singing about their aversion to “fried chicken steak”. The triumphant chorus goes: “Keep that chicken on the mother****ing bone.”

9. Beignets for breakfast at Café du Monde in New Orleans 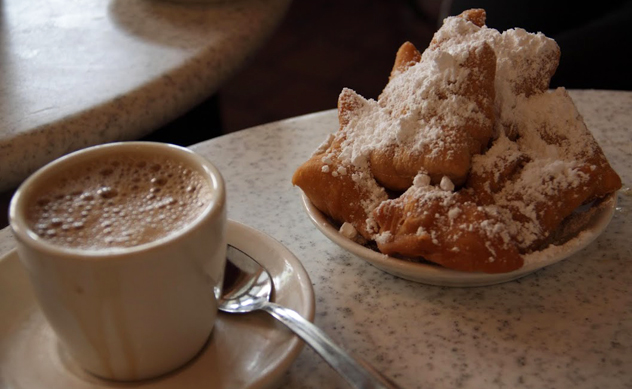 Basically a doughnut in trapezoidal form, dusted with powdered sugar and washed down with creamy chicory coffee, this is the kind of dish you can only really get away with in a place like New Orleans. It feels like anything could happen here – and probably did the previous evening.

Thomas Keller’s iconic establishment dropped from number 10 to 30 in this year’s World’s 50 Best Restaurant list. The food is slightly predictable for a fine dining restaurant, but the foie gras is superb and the lobster, perfection. We get it: it’s an expensive restaurant. But it’s my first night in the city, and as I sit alone, drinking a glass of bubbly, a full moon starts to rise above the Big Apple skyline. I’m pretty much in love with this moment, with New York and with America. Banana split-flavoured Oreos and all.

*Yes, pineapple casserole exists in Georgia and it is amazing. Ingredients: tinned pineapple, crushed Graham crackers and grated cheese, baked in a casserole. Truly inspired Southern cooking. Try it at Taste of Lemon in LaGrange, Georgia, as a side to the meatloaf, if you can’t persuade any of your cousins to host a wedding.