Our next contender for the 2016 Boschendal Style Award is Marble, David Higgs’s dramatic live-fire restaurant in Rosebank, Johannesburg. Here’s why it deserves its nomination as the most stylish restaurant in SA.

The look: Sophisticated and contemporary
The location: Trumpet on Keyes in Rosebank, Johannesburg
The creatives: Design by Irene Kyriacou of Oniroco, and Reddeco; blue tiles and ceramic plates by Mervyn Gers; makrami, bar panel and cement in-lay under kitchen pass by Damien Grivas; custom photographs by Krisjan Rossouw; branding by GRID; and Dolos installation by Peter Mthombeni 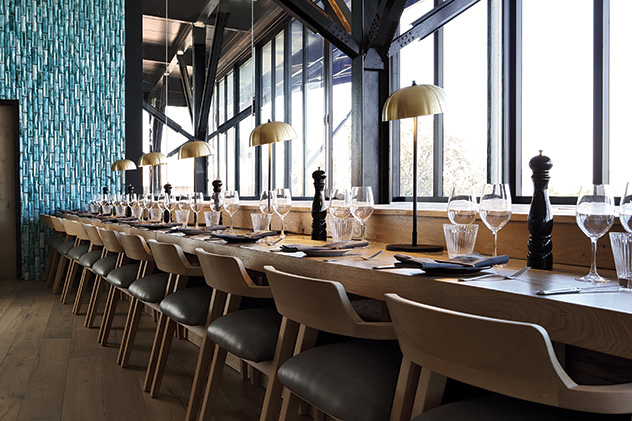 Tables at the windows offer a bird’s eye view of Rosebank. Photo supplied.

The design of David Higgs’s new Johannesburg restaurant was coordinated by Irene Kyriacou, owner of Oniroco who worked in partnership with architect designers, Reddeco. The team also worked closely with selected South African artists and creatives including Damien Grivas, Mervyn Gers, Krisjan Rossouw, Peter Mthombeni, Anatomy and Goet and Laurie Van Heerden from WIID to create a space that both David Higgs and business partner Gary Kyriacou had envisioned. 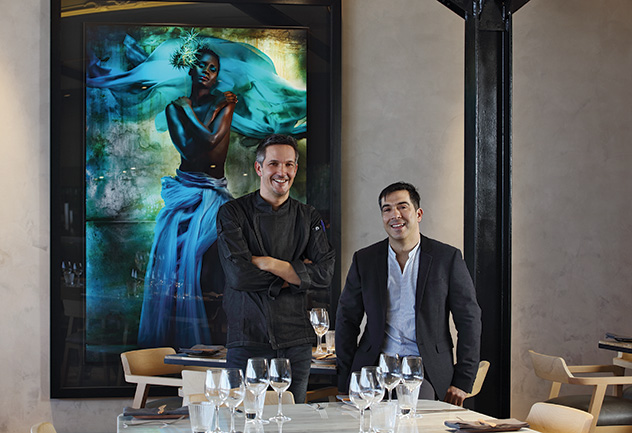 Walking into the restaurant, Irene wanted to create a sense of arrival for the guests. “She wanted each and every person who visits Marble to get the sense they are in for a treat – and not just the food, but the décor, service, atmosphere and art,” explains Marble’s PR Joanne Botha. She managed all the styling and chose every piece for Marble – from the fabrics, leather, finishes and lamps, to the vases, glasses and the art by collaborating artists. 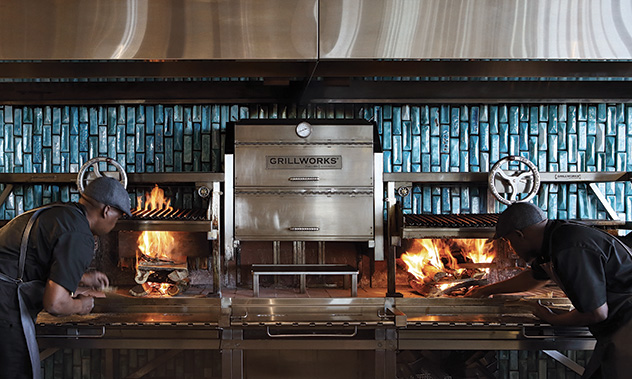 The grill, with its backdrop of Mervyn Gers tiles, is a dramatic centrepiece. Photo supplied.

Thematically, fire is an element that’s carried through the whole restaurant – not just in the kitchen, but in the Mervyn Gers wood-fired blue tiles behind the grill and in the wooden end-grains on the welcome desk and in the bar, which reference wood in a fire. Krisjan Rossouw’s photographs welcome diners to the restaurant with a fiery theme. In the first, a beautiful model poses with a burnt branch, representing fire and ash. The second features a woman dressed in feathers, representing the style of the restaurant, and the third features a woman with a billowing blue scarf over her head, representing the smoke from the grill. 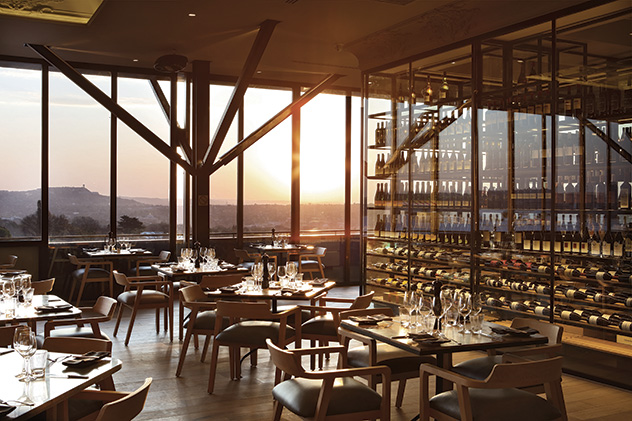 The restaurant promises to be a hot spot for sundowners. Photo supplied.

While the fire is a bold element, the décor reflects softer touches and finer detail. From the intricately moulded cornicing and the ceramic Dolos (small mouldings to mimic the feet bones of cattle) near the restrooms, to cotton napkins and ‘unfinished’ pieces, such as the couches from Casamento, which have visible thread along the seams. A New York-style bar features an iconic panel in brass verdigris by Damien Grivas.

The food at Marble celebrates fire and food cooked on it – not just meat, but all ingredients cooked on coals, including fish, poultry, vegetables and breads. 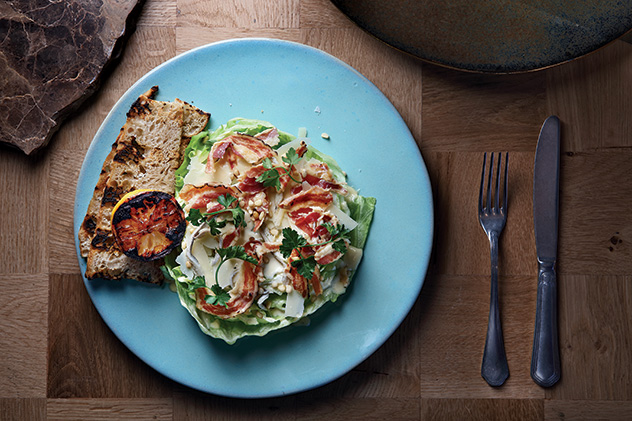 One of the most popular dishes so far has proven to be the blackened octopus, which is served with crushed paprika potato, candied lemon and squid ink dressing. As for the desserts, the ice-cream sandwiches have become a signature. These come in four options: cocoa-biscuit with vanilla bean ice-cream; almond meringue with halva ice-cream; gingerbread biscuit with bourbon and banana ice-cream; and brandy snap with pineapple and chilli ice-cream.

Does Marble have what it takes to win the 2016 Boschendal Style Award? Find out at the Eat Out Mercedes-Benz Restaurant Awards on 20 November 2016. Buy tickets now. 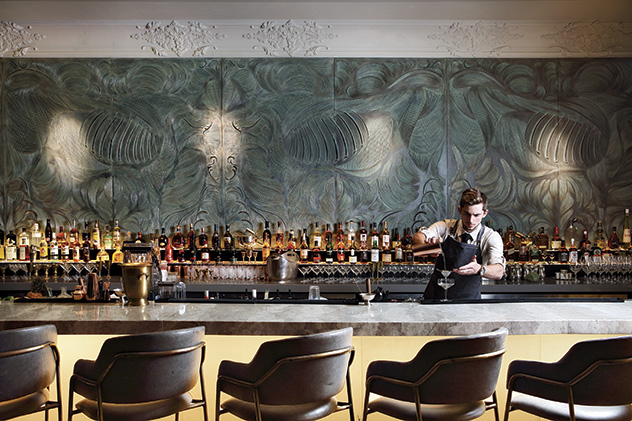