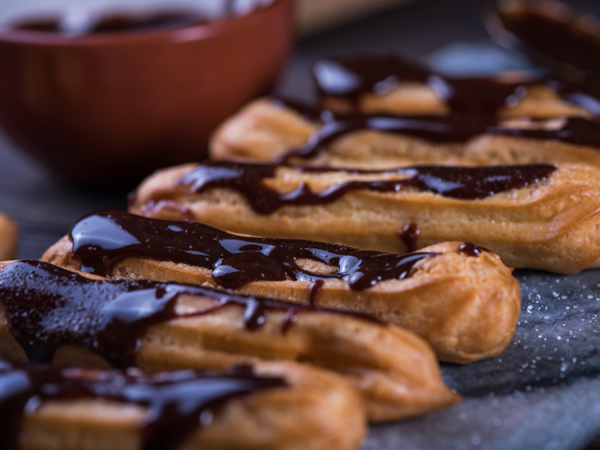 In kitchens and café’s across Spain and Latin America, sleepy systems are warmly wakened with sticky-sweet churros dipped in hot chocolate or champurrado (a chocolatety atole) – rather rich for a “poor man’s breakfast”, as it’s been called. But churros are also good as an afternoon snack or dessert, which is why they’re on Mexican restaurant menus around the world.

Like youtiao in China and doughnuts in the States, churros are strongly associated with place. In Continental and Latin American countries, churreros (churro cooks) sell churros from churrerías (churro vendors) on the sidewalks, and at festivals like the Day of the Dead (Día de Muertos).

So what are they? Considered something of a Mexican or Spanish doughnut, churros are made from cake-like dough that’s been pulled through a star-shaped pastry nozzle to make long, ridged shapes. These are deep fried – the outside goes crispy; the inside stays soft – before being dusted with cinnamon and sugar (hence the doughnut analogy). They are served with a chocolate dipping sauce. Variations include churros filled with guava (in Brazil) or dulce de leche (in Mexico and Chile).

To take a bite of this sweet Mexican treat, try them at the following South African eateries.

Ask anyone who has tried the churros here and they’ll surely tell you they’re quite sublime. Together with Perron’s jalapeño poppers and margaritas, the churros are one of the top three reasons diners keep coming back, says Perron co-owner, Christa Jakoby. For R54, you get either two cinnamon-and-sugar-dusted churros or four halves, which you can dip in either a dark chocolate sauce or in their version of dulce de leche. It’s made with coconut milk, so it’s not as thick as what’s traditionally served in Latin America, though this does allow for easier dipping. 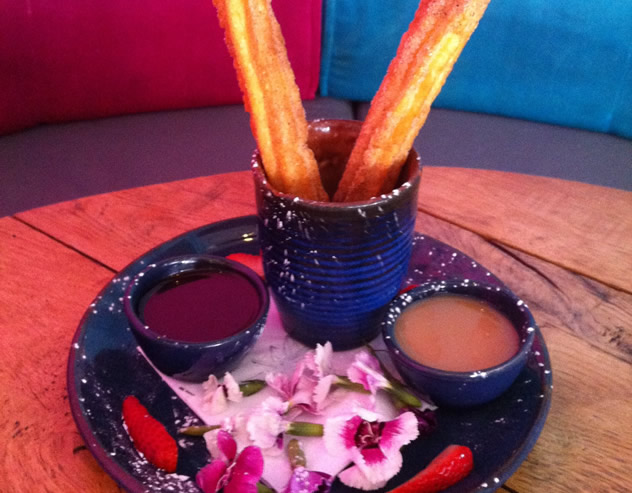 Churros at Perron. Photo courtesy of the restaurant.

At this quirky, retro-style hipster joint, the churros are also proving popular. (The place is known to get packed on a Friday night, so no doubt it’s a wise way to end off a night of drinking and socialising.) The churros here are longer than the more common breadstick shape, though this means you’re served a delicious tangled ‘nest’ of churros, dusted with sugar and cinnamon, served alongside ice cream and a home-made caramel sauce for dipping. (R45)

This brand-spanking new, authentic Mexican eatery sure drew the crowds when it opened earlier this month. There’s tapas, tequila, a smattering of Aztec-inspired and local flavours, and churros. For R49, you can have your fried dough sticks plain or dusted in cinnamon and sugar – welcome news for those who like their sweets not overly sweet. 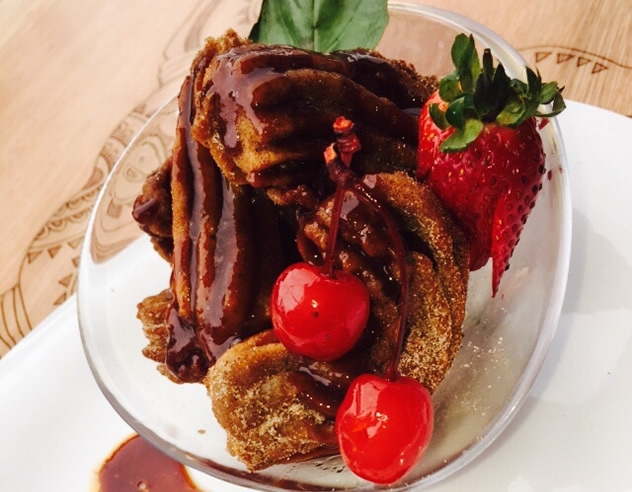 El Toro Churros with chocolate sauce and strawberries. Photo courtesy of the restaurant.

At this go-to spot for all things Mexican, the churros are, predictably, very good and very popular with patrons. Order a portion and you’ll get three chubby, crispy churros with the customary ribbed, star-shaped edges and sweet cinnamon coating, served with a rich, home-made chocolate dipping sauce. (R45)

After you’ve oohed and aahed over tapas from the five taste experiences (salty, umami, sweet, bitter and sour), your waitron may suggest a sweet finale. The crowdpleasing churros are a simple choice, but with a twist. The several churros you get to share are rounded (like doughnut holes), and they’re served wrapped in cheery branded paper, adding a touch of pop-art lightness to the overall Pot Luck Club experience. The churros are infused with tonka bean, adding an unusual vanilla-like flavour. And the warm, malted chocolate dipping sauce on the side has just the right hint of saltiness. (R60)