There’s nothing quite like the moment of suspense just before you bite into a chilli popper, when the heat of the jalapeño is still in question. Whether it’s your favourite tapa or what you order to warm up your taste buds before the rest of the meal, everyone loves a good chilli popper. We’ve rounded up five great ones in Jozi.

Here pickled jalapeños are stuffed with mozzarella, cheddar and cream cheese before being covered battered and deep fried. There’s also the option to add bacon bits to the cheese stuffing. Opt for plain cheese poppers for R52 or the bacon bits for R59. Four are served per portion, accompanied by sour cream.

Chilli poppers are serious business here. Pickled jalapeños are filled with a mix of white cheddar and feta before being dunked in a Mexican beer batter. They’re deep fried before being plated with sour cream. Get six for R55. On 1 June La Santa Muerte will also be introducing bacon-wrapped poppers. Also made using pickled jalapeños filled with white cheddar and feta, these bad boys are then wrapped with bacon and popped in the oven. Four of them are served with red and green chimichurri salsas for R58.

Chilli poppers are done differently here, as the jalapeño is filled with cheddar and mozzarella before being wrapped in phyllo pastry and then crumbed and fried. Two will set you back R49, and they come with salsa and chutney sauce for dipping.

At Mexican Fresh, heat seekers can look forward to whole jalapeños filled with a mix of mozzarella and cheddar, battered and then deep fried. Three golden brown poppers are set before you with salsa and sour cream. Get the cheese ones for R40, the chicken for R44 and the beef for R46. Add extra cheese for R8. 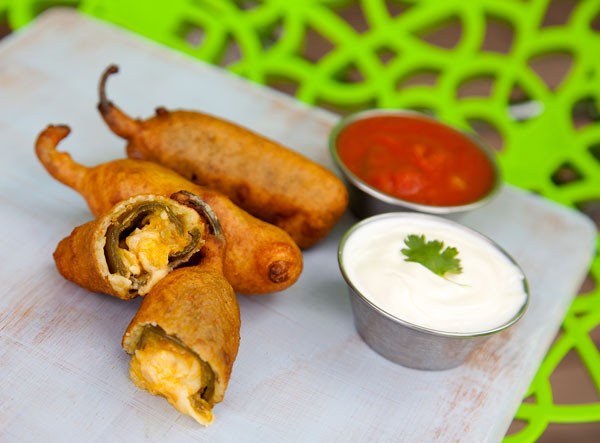 Everything is freshly made at this vibey spot and they’re proud of it. Their jalapeno rellenos are filled with cheese, dipped in a beer batter then served with salsa and sour cream. They’re plump, crisp and R15 a pop.