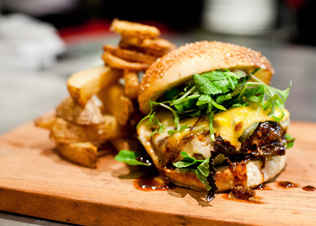 Tucked away in a dark corner of a recently renovated shopping centre in Randburg, Alpine Restaurant is about as hidden as gems get. While the 80-seater might be easy to miss, it’s certainly not easy to forget. The presence of award-winning olive oil, along with the promise of a fully stocked cellar, means you’re in for a dining experience you won’t soon forget.

“We are known for our meat,” says co-owner, chef and wine curator, Daniel van Zyl. Considering the adjoining butchery, it’s clear that meat lovers know where to get their kicks. What is surprising, however, is that Alpine is by no means a steakhouse in the traditional sense of the word. The menu is extensive and inclusive, with an impressive variety of vegetarian options, chicken and fish dishes, pizzas, pastas, a lunch menu and a somewhat perplexing Bulgarian section.

The baked camembert with fig preserve and crostini is served in a spotless tuna tin. Dipping the crunchy crostini into the gooey centre of melted goodness is something everyone should experience at least once. Don’t think you won’t finish a whole camembert wheel by yourself, or that you won’t be able to have a main meal afterwards. You will, and you won’t even mind it. If you’d rather share a starter, opt for the gorgonzola, red onion and truffle oil focaccia.

Meat lovers are treated with a roasted marrow bone and can choose two of the incredible 13 side dishes with each meat dish. The 300g 21-day dry-aged rib-eye is a juicy and delectable affair big enough to satisfy even the most monstrous appetite. Vegetarians won’t be disappointed in the tagliolini with black truffle shavings, extra virgin olive oil and parmesan.

“We had to ask ourselves what would appeal to the middle-class, middle income residents in the area,” says Van Zyl about his impressive wine collection. Unafraid to get his hands dirty, Van Zyl and his team tasted over 7000 wines before putting together a selection that they wouldn’t mind calling their own. Instead of giving patrons a wine list, Van Zyl stops at each table to curate a wine experience based on their individual preferences and budget. The collection includes familiar favourites like Simonsig Sunbird and Leopard’s Leap Merlot, but is spiced up by French and Italian visitors. Imported wines cost between R50 and R55 per glass, which means you can try a new one every time you visit.

Wine lovers should also keep an eye on the restaurant’s Facebook page for wine tasting events.

The waiters know the menu well, are happy to recommend dishes and are attentive without hovering. They observe the little graces and subtleties that are sometimes so lacking in local restaurants. The vigilant eye of the owner and his willingness to accommodate and engage with patrons make the service at Alpine exceptional.

It’s quite telling when a restaurant fills each table twice over on a regular weeknight before payday. The happy buzz of a full restaurant, the smell of quality food, the cheerful clink of wine glasses and the glow from the softly lit glass cellar makes for an extremely pleasant eating experience.

Have you been to Alpine Restaurant? Let us know about your experience by writing a review.