As a resident of Woodstock, I tend to get very excited at the first signs of a new restaurant arriving in the area. So I was very chuffed to find out that the formerly derelict building next to The Bromwell in Albert Road was finally refurbished, and that it now housed a steakhouse. And not just any steakhouse – a sister restaurant to The Local Grill, voted as the best steakhouse in South Africa in 2011. Not wanting to waste a minute, I grabbed my husband, rounded up a few fellow meat lovers and booked a table for the first available evening – only one week after they opened, in fact. This might not be fair towards the restaurant in question, as any new eatery is bound to have (pardon the pun) some teething problems, but luckily for us, the staff of The Local Grill seems to have hit the ground running. 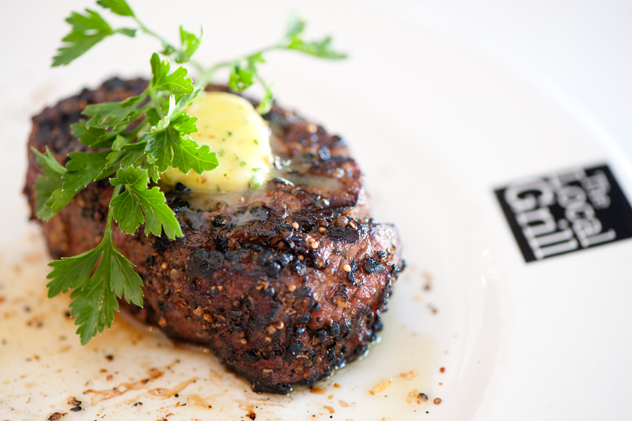 There’s no two ways about it, this is where you come when you’re in the mood to sink your teeth into a really, really good steak. It should be noted, however, that there’s a variety of options available for any non-red-meat-lovers you might have dragged along, including a couple of interesting looking salads and a few seafood and poultry dishes.

Our party bypassed all these options in favour of the red meats we could see displayed in the small glass-fronted butchery. Meats are wet- and dry-aged on site and they stock both Chalmar grain-fed and Greenfields free-range beef. With a view to appreciate the reportedly wonderful flavour of the latter (a winner in the recent 2014 Eat Out Zonnebloem Produce Awards in the paddock: fresh category) we all ordered Greenfields cuts. My 200g sirloin steak (wet aged, R113) was expertly done and served perfectly medium rare, and my husband was equally impressed by the flavour and quality of his rare T-bone steak (500g, dry aged, R191).

If you need help deciding between the wide range of cuts, the staff are happy to explain. You can also refer to the clever placemats, which display a diagram of a cow illustrating the different cuts.

All mains come with wide choice of sides, including pap, mashed potatoes and beef jus, a variety of veggies, onion rings, fries, a side salad and a serving of corn on the cob. I opted for sautéed seasonal veggies (crisp strips of sweet peppers, carrots and onions bursting with flavour), and also sampled some of the delicious shoestring fries and a rather lovely salad from my companions’ plates. No complaints here, really. The only slightly off-kilter note of the night was when we ordered the crème brûleé for dessert, which was a bit grainy under its caramelised crust. 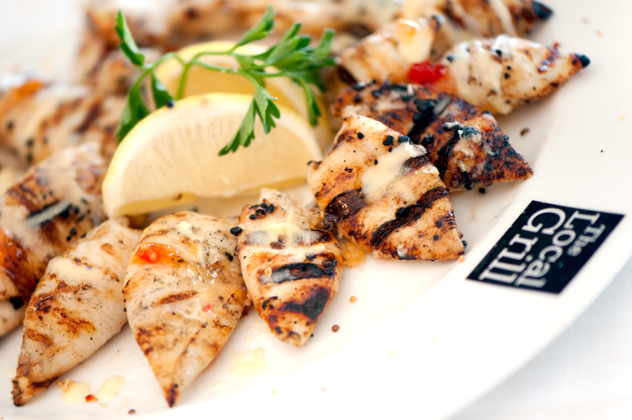 There are also a couple of dishes I’d like to try out in future, specifically the Karoo platter as a starter (venison salami and carpaccio with beetroot jam and shaved dill pickle) and, under the mains, the sausage sampler, which consists of three types of sausage, Greenfields beef boerewors, Karoo Persian lamb sausage and a venison sausage. Served with pap and tomato relish or fries, this sounds like an adventurous take on comfort food, and the perfect indulgence for one of those cold wintery days headed our way.

There’s a big, well stocked bar and bar area that’s ideal for pre-dinner drinks. As for the wine list, it’s totally serviceable: you’ll find no big surprises or hidden gems, but the list caters for budgets small and large, so there’s something for every pocket. BYO is R50 a bottle and limited to one bottle per couple.

Service is not smooth as silk yet, but the waiters are very friendly, welcoming and eager to assist. Furthermore, the management makes a point of asking for feedback and checking to see that customers are happy, so I predict that any small hiccups will be ironed out quickly.

The building, which has the look of being a factory or warehouse in a former life, and had been dilapidated and desolate for years, has been rebuilt and restored to showcase a clean, modern design that’s all big glass windows, gleaming wooden staircases and neat facebrick walls. It has to be said that the décor does make for a rather loud and echoing dining space, but let’s be honest, you’re here for the steak, not for an intimate, candle-lit experience. The eatery seats 180 people, to give you an indication of size and ambience.

The no-fuss interior and kiddies’ menu do, however, make it a fine choice for a family outing. Furthermore, the restaurant has something few other spaces in Woodstock (and the City Bowl, for that matter) can boast about: ample and secure parking! It really is quite refreshing not having to worry about your car, or search high and low for a spot in a dark side street.

Finally, while it’s still a bit strange to see such a mainstream establishment settle in what is definitely one of the city’s edgier neighbourhoods, there’s no doubt that The Local Grill is a very welcome addition to the Eastern City dining scene.

The space below the restaurant has been converted into a state-of-the-art brewery and taproom; The Woodstock Brewery is scheduled to open within the next few weeks. Excellent steak and craft beer within reaching distance of one another? Bring it on, we say.

Have you been to the new The Local Grill in Woodstock? Let us know what you thought by writing a quick review.