Behind the scenes at The Test Kitchen with Ivor Jones 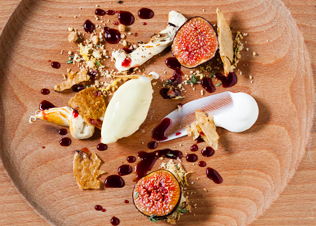 Friday night in The Test Kitchen. The waiters have been briefed by the sommelier, the famous pig’s head has been carved by the famous sous chef (James Park – a popular writer and speaker in South Korea) and the first guests are being escorted to their tables.

Head chef Ivor Jones is manning the pass – the interface between the kitchen and the dining area. The Test Kitchen’s open-plan layout and lack of music means that the engine room is responsible for both the food and the ambience. Ivor is half spider in the middle of a web that hands out food instead of trapping it, and half conductor with his back to the orchestra.

It’s a powerful role: this is the 2012 Eat Out Restaurant of the Year, after all. And Ivor, who was appointed head chef by chef-patron Luke Dale-Roberts in February, is just 27 years old.

As the first few orders come in for the evening, Ivor announces coded commands to the stations, who respond with an affirmative chorus. I’m starting to think that there isn’t really much to the head chef business after all. But at 7.17pm, Ivor plates his first dish of the evening: the flash-cured blesbok, springbok liver parfait, eland marrow and morel jam from the restaurant’s iconic gourmand menu. I ask why this particular task falls to him.

“Everyone’s quite busy,” he mutters. “Luke’s away… and it requires… a certain…” He trails off. But the subtext is clear: what it requires is the expertise of a head chef.

Chefs are notoriously harsh commanders of their quasi-military domains. I wonder how this friendly, casual young man with a lumbering gait and dreamy green eyes adapts to such an environment.

“I’m a different person in the kitchen,” he says, “but it’s not an act at all. This is work, and it’s important that you do a good job. I still get nervous. You’re in absolute control. When I shout out that order and the team responds… I still get goosebumps.”

“Oh, I’ve seen him get properly pissed off,” confirms a youngster in the amuse bouche section. “But before Ivor lets you have it, he says stuff like, ‘Don’t make me do this’ and ‘why do you make me do this?’ Hell, that just makes you feel even worse.”

By 8.38pm Ivor is in full stride, and the kitchen clanging so he has to shout “Listen up!” for attention before reading out an order. The chefs respond in the normal fashion – somewhere between a regal French affirmative and a ribald sailors aye-aye.

The grill chef casually extinguishes an enormous fireball. James Park cuts a live crayfish in half, lengthways. (This does little to deter the crustacean’s limb-waving. They breed ‘em tough up the Weskus.) Ivor is describing the oyster custard to me like a parent reliving his child’s first steps.

In his matric year, Ivor had no idea what he wanted to do. He was cooking up a storm at home, but he did not seriously consider catering as a career option until he came across the SA Chef’s Academy at a school career day.

“Suddenly,” says his brother Dylan, “we were being forced to watch the cooking channels at home, and he took over the kitchen. He couldn’t start talking about food. He was obsessed.”

A year later, Ivor was sitting in his car in the parking lot at Constantia Uitsig. He had sent a speculative CV to La Colombe and received a call from Luke Dale-Roberts telling him to come in for a trial. The day before the trial, he drove to the restaurant, just to settle his nerves.

Ivor did more than merely survive his first day in the kitchen. He was offered the position of commis chef in the sauce section. It was a precocious placement, and set the theme for Ivor’s partnership with Chef Dale-Roberts.

Ivor loved the rush at La Colombe. He made a point of being the first person at the kitchen every day. While Luke Dale-Roberts was ripping out microwaves, focusing on true excellence and winning a spot on the world’s best restaurant list, Ivor was rising through the ranks under the tutelage of sous chef Scot Kirton.

And when Luke Dale-Roberts left La Colombe to set up The Test Kitchen in 2011, Ivor followed two months later. “I couldn’t leave La Colombe without a head chef or a sous chef,” explains Ivor.

An unmarried couple is on a date. He leans across the table to feed his partner a taste of his carefully laden fork. She rolls her eyes in ecstasy. Elderly men abandon inhibitions and eat with their hands. One woman is picking nervously at her plate – nibbling each individual element with exaggerated care. A man with a grey beard gets up to photograph the kitchen on his cell phone.

The Test Kitchen’s biblical wait list creates expectations that feed the kitchen with pride and energy. “We also feed off each other,” says Ivor. “Luke trusts me with his reputation, which is a scary thought. As a leader you have to inspire passion. You have to show them how much you want this. Then they will want it too.”

Every few months, Luke closes the restaurant and he and Ivor experiment with new dishes. This is the essence of the Test Kitchen’s innovative menu, and the backbone of Luke and Ivor’s vaunted relationship. Initially, Ivor simply implemented Luke’s new ideas, but increasingly Ivor is contributing his own ideas and forging new culinary directions.

“Last week, Luke did two new dishes and I started developing one. Mine didn’t work. But ideas evolve. The first time we tried the crayfish idea, we put ferns onto the coals and it didn’t work. So the ideas develop over time.”

Ivor is currently working on a salt-cured celeriac that is smoked with American oak barrel chips and then cooked in yoghurt. Celeriac finished on the fire, and served with the yoghurt as a sauce.

A patron sends the crayfish back. This is not an insignificant event. Never before in the history of the Test Kitchen has the crayfish ever been sent back.

The TK Concrete Ball crayfish dish was invented by Luke after he discovered concrete bowls that could be connected to make a sphere. The bowl is filled with hot coals, cinnamon and vanilla sticks. The crayfish tail isthen placed directly onto the coals and the bowl is covered to make the sphere. It is then placed at the table of the guest to cook while they are eating hors d’oeuvres.

This was the same crayfish that put up a fight after it had been cleaved in half, so freshness can’t be an issue.

Ivor and the maître d’ confer in a back room. Ivor samples the dish. Could this be a juicy crisis for my article? I ask Ivor what he is going to do. Will he refund the customer? Offer them a free drink or dessert? Ivor tilts his head.

This was not an arrogant response; it was the reaction of a confident chef, of a man who is doing what he should be doing.

Towards the end of the evening, as the last guests areleaving, I ask him about his long-term plans. But Ivor demurs.

“It’s difficult to explain,” he says. “I want to do something that has never been done before.” He won’t say more.

A distinguished man with an American accent walks past us, “I have been all over the world and eaten at many great restaurants. And that was the probably best meal I’ve ever eaten.”

Ivor beams. “It’s important to hear that,” he says. “Most of the stuff that we do with the food does not even get noticed. But that’s not the reason why we do it. We do it for one simple reason: to make it better than the day before. At the end of the day, that is what keeps them coming back for more.”
By Ami Kapilevich