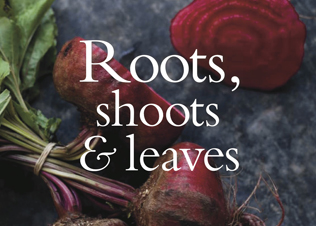 On focusing on vegetarian recipes:
I am not a vegetarian, but I hope to encourage others to be more creative with meat-free meals – for both ethical and health reasons.

On writing:
I think there is definitely a bit of poetic licence in the chapter titles (which include 'roots, tubers and bulbs'; 'eat your greens'; and 'climbers and sprawlers'). It was a fun process and one that I do love. It makes for far more interesting reading than titles such as ‘breakfast’, ‘lunch’ and ‘dinner’… I’ve always enjoyed the writing part of making a cookbook as much – or even more – than putting the recipes together. And I hope that that poetry carries through to the chapter introductions and even the recipes themselves.

Special storage tips for veggies? To fridge or not to fridge?
As a general rule, root vegetables prefer to be kept in the dark – but not in the fridge. In fact, potatoes (if you’re lucky enough to grow them at home) are best kept under the ground and used as you need them. Tomatoes are happiest in a sunny spot in a bowl to ripen – NEVER in the fridge. Generally leaves (in brown paper or plastic, if you must) like to be near the bottom of the fridge.

On simplicity:
I think that my recipes reflect the way I cook at home. I have two small children and two jobs, so one needs to be realistic about these things! It definitely also stems from growing up in the sticks where you simply have to make a plan for lack of ingredients…

On the influence of family:
My mother is a phenomenal cook and has an unbelievable palate. My late great-aunt Eve Palmer was a literary icon, and my grandmother’s letters to Eve are about to be published… so let’s hope I got all the good genes.

On the beauty of heirloom vegetables:
I’ve always been surrounded by unusual ingredients. My grandfather grew salsify for years and I’ve been eating celeriac for as long as I can remember. So when I discovered heirlooms more recently – like purple carrots – and I realised I couldn’t have them unless I grew them, I took up gardening right away. The Irish potato famine is the perfect example of why heirlooms are important. When food supply is dependent on a single variety or hybrid, the food supply becomes vulnerable to specific pests and diseases. (In Ireland the potato famine led to the loss of 25 per cent of the country’s population.)

I think that even though heirlooms have very much been a trend over the last couple of years, they are beautifully photographed by Russell Wasserfall (photographer, stylist and writer and co-owner of The Table at De Meye), so I hope that people would buy the book to pore over the imagery as well as to cook the recipes, of course.

I am grateful to all those seed-savers out there who keep heirloom varieties alive by bagging seeds, passing them on to other growers and keeping the passion. (There’s a more complete list of farmers, producers and suppliers in the cookbook.)

On the production process:
The team at Sunbird include my publisher Ceri Prenter, editor Michelle Marlin and designer Marius Roux, who were all fantastic to work with. Russel Wasserfall and I spoke the same language in terms of shooting and keeping things simple in terms of styling, backgrounds and letting the ingredients speak for themselves, instead of overworking backgrounds with clutter.

On her influences:
I love all Nigel Slater’s books (mostly for his way with words when it comes to food) and I love Skye Gyngell’s recipes and use of flavour. If I could combine a bit of those two in my own work, I would be a very happy author.

On the book:
Wherever each book ends up, I would like it to be well-splattered – a sign of any used cookbook!

If you like the sound of Roots, Shoots & Leaves, try Bern’s recipe for sweet pepper and feta phyllo tart.

Roots, Shoots & Leaves is published by Sunbird and you can find it in Exclusive Books, Wordsworth Books, CNA and via Bern’s blog livetoeat.co.za.