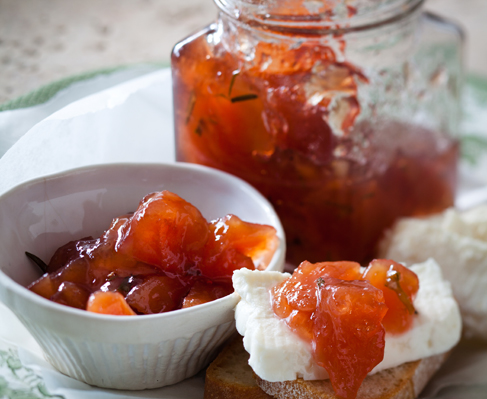 Seven years ago, Vera Ann Sluis-Cremer was working as a secretary to a financial director in a huge engineering firm in Johannesburg. “It wasn’t the right job for me at all,” she says with a chuckle. Today, she lives with husband Lucio (plus two dogs and a cat called Pixel) in the tiny town of Kestell, overlooking the Drakensberg.

It’s in this idyllic setting that she produces Karma Jam, winner of the best new product award at this year’s Eat In DStv Food Network Produce Awards. Her range, including concoctions like pear, pinotage and rosemary; peach and granadilla; apricot and chilli; and rosemary and quince jam, was pronounced one of South Africa’s first serious jam ranges by our team of judges.

At our awards ceremony this Saturday, Vera won our hearts with the story that she’d distributed her jams amongst everyone she could find flying down from Joburg so that she could have a stall at our market. “I started out producing jam for the restaurant Moyo. It didn’t end well, but I found making jam hugely relaxing, and what they did give me was the self confidence to carry on making jam.”

Vera has spent a long time developing her own recipes, and getting it right without preservatives or artificial nasties. In Kestell, she is lucky enough to have an old-fashioned orchard filled with rare produce like pomegranates and quinces, which helps to determine her inventions. Many Kestell locals also bring her fruit to make into jam, and one local farmer barters apricots in exchange for jam. “We’re right near the cherry packers, so I also make a cherry and amaretto jam.”

As for the inspiration, some ideas come from suggestions from friends and, occasionally, international visitors to Vera’s backpackers: “A Polish woman told me that in Poland they make jam from rose petals”. Other recipes come from mistakes: a mix-up with grapefruits and oranges in the fruit bowl resulted in some grapefruit orange marmalade. “It’s quite delicious,” says Vera. And when she visits two of her children who live in London, she makes a trip to Harrods with a notebook to get ideas from the legendary department store’s endless aisles of jam.

But at heart Vera is a proudly local producer. She’s very committed to her community, buying as much fruit as possible from the rural township in Kestell. Here she’s also taught four local women to smock, creating a business producing smocked shweshwe dresses, and has helped to set up a bicycle township tour. “When I talk about wanting Karma Jam to grow, what I really want is to be able to employ a local woman.”

It sounds like she’s a deserving winner indeed. Is there anything else that she’d like to add? “Just that I really, really like to make jam. The colours are so pretty, and it’s so clever!”

Want to try some of Vera’s amazing jam? Email her at kestellkarma@gmail.com, or pop into Kestell, where Vera also runs Karma Backpackers.