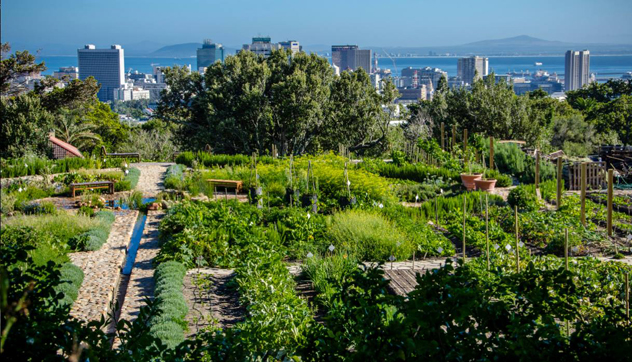 Standing in the middle of the Oranjezicht City Farm early in the morning, the city waking up below you, the mountain sleeping behind, surrounded on all sides by glorious green growing things, it’s hard not to gape.

It’s inspiring to see what well-known Capetonian Sheryl Ozinsky (former head of Cape Town Routes Unlimited turned consultant) and a team of enthusiastic partners and volunteers have accomplished here at the center of the City Bowl. In little over a year, they have transformed a neglected bowling green into a shining example of organic urban agriculture and a thriving community space. And in the process, they have returned the area to its lost heritage: the original Oranje Zicht farm was established here in 1709 and played an important part in providing food to the young colony.

Today, the farm employs four full-time gardeners and the weekly farmers’ market provides an outlet for more than 60 producers. A team of volunteers contributes to educate people about organic gardening and the importance of urban food production. And the Oranjezicht community members have embraced this reinvented space wholeheartedly.

It’s no wonder the OZCF was crowned winner of the heritage award at the recent 2014 Eat Out Zonnebloem Produce Awards. But this, says Sheryl, is only the beginning. 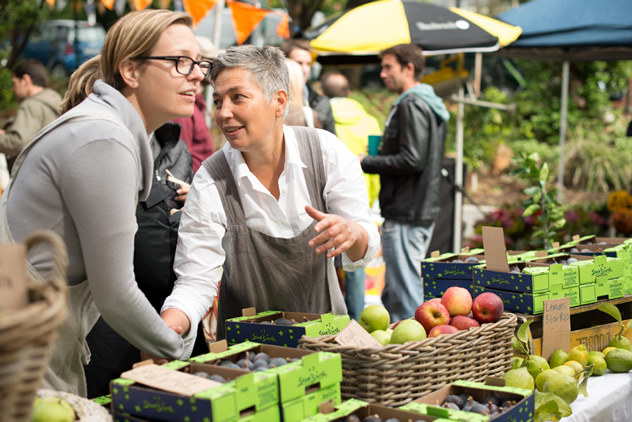 “We would love to see the OZCF grow into an umbrella body which looks after many other similar farms in different areas throughout the country; to help others with support and training, with financial and structural governance.”

Of course, this kind of project has to be tailored to the community it serves, explains Sheryl. “For Oranjezicht, the farm and the market is an avenue for community involvement. For other people, perhaps in underprivileged areas, it might be about survival.”

The potential is enormous. “Why can’t we grow our own food? We’ve estimated that with as little as 100 square metres, you can produce enough for yourself and have enough left over to sell as income. Think of the difference this could make in the lives of the growers. Think of the difference it could make to the environment if we could get people to buy just 10% of their food from local and organic producers!”

Clearly, the sky’s the limit. Especially since the demand for local organic produce is growing at an enormous rate. “More and more, people want to know where their food came from; they want to know how it was produced. We’ve been kept in the dark about our food production for so long … but perhaps that’s a story for another day.” (To learn more about food security and urban agriculture, sign up for one of the OZCF’s weekly Food Dialogue sessions at ozcf.co.za).

“This,” says Sheryl, as she looks out over the rows of healthy herbs and veggies around us, “is only the first stone in the pond. Imagine what we could do if we had 150 farms like these!”

Now that would be something to see.