With the current carnage of restaurant closures in South Africa due to the country’s lengthy COVID-19 lockdown, two hospitality industry professionals have come up with a plan to prevent more eateries from going under. 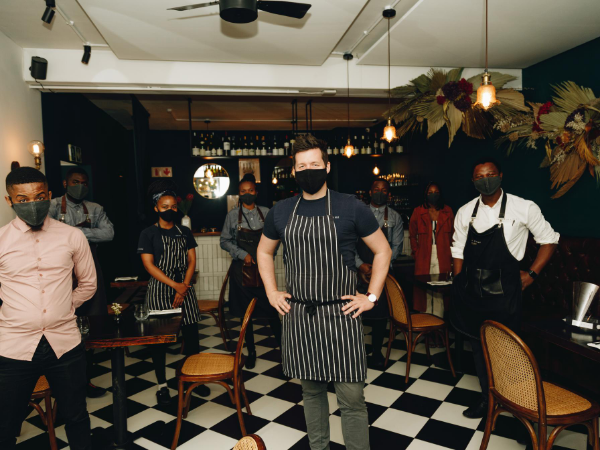 Founded by chef patron Matt Manning of Cape Town’s Grub & Vine and winemaker-owner Alex Dale of Radford Dale Winery in Stellenbosch, the Restaurant Rescue Project (RRP) was launched earlier this month when the South African government re-instituted harsh regulations that included a curfew and the prohibition of alcohol sales.

To help the industry, RRP is asking restaurant-goers to back their favourite restaurants by purchasing dinner vouchers with an incentive to receive a complimentary case of quality estate wine when the ban is lifted. The project has already saved five Cape restaurants from permanent or temporary closure and in turn, has secured the livelihoods of many employees.

The campaign began when Dale donated almost half a million rand worth of Radford Dale Wines to Matt in a bid to keep the doors of Grub & Vine open. This generous donation allowed the chef to create a Restaurant Rescue package that sold out in a matter of days. This provided a much-needed cash injection that is keeping the lights on and staff employed. Due to the campaign’s success, along with a pledge from other wine estates, the duo decided to broaden the reach of this initiative in a bid to save other restaurants.

Four weeks into the campaign, RRP is now assisting 14 independently owned eateries with more joining almost daily. Five of these campaigns are already sold out. Some of these restaurants include Wolfgat in Paternoster and La Mouette in Sea Point. Others – including FYN, La Tête and The Test Kitchen – are also set to join later this week.

News Hot From The Stove! @_lamouette_ , now under the helm of Chef Neill Anthony, has joined the Restaurant Rescue Project thanks to the generosity of @strandveldvineyards Help keep La Mouette in business during lockdown by purchasing a dinner voucher to the value of R1200 and receive a case of 6 wines from the Strandveld range to the value of R1200. The value is R2400 but you only pay R1200! To book, visit: https://www.voucherplan.co.za/event/37c1c6da050a4aed466b443aa4722ff5 #restaurantrescueproject #strandveldvineyards #WoSA #lovecapetown #eatout #plattersguide

The fund’s website allows individuals to learn which businesses are participating and the funds are paid directly to the restaurant – there are no administrative fees or deductions.