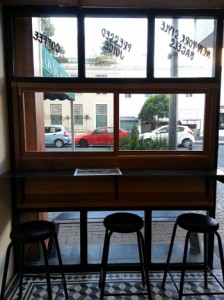 Beloved of New Yorkers, the bagel has yet to really make its mark in South Africa. Max Bagels – a brand new hole-in-the-wall spot on Bree – plans to change that.

Run by Andrew Kai and Matthew Freemantle of Mucho Gusto, the new spot occupies a hole-in-the-wall on Bree, just after the junction with Wale Street. “We originally got this space for our working kitchen for our catering company, but about six months ago we decided to make something of it.”

Spotting a gap in the market for artisan food that could be bought to go, the pair decided to focus on bagels thanks to Andrew’s enthusiasm for the bagel culture of New York. “I lived in New York for a bit and I consciously ate a lot of bagels,” laughs Andrew.

The bagel may not be brand new to Capetonians – New York Bagels closed earlier this year – but according to Matthew and Andrew, he’s yet to find a proper New York-style bagel in the Mother City. Until now, that is.

“A New York bagel is all about the bagel” says Andrew. The boys spent last three months perfecting the recipe, which involves boiling the dough in water flavoured with malt syrup. A specialist baker now prepares their bagels according to this recipe.

As for fillings, they’re offering the New York classics: salt beef brisket, pickle mustard and cream cheese (R40); local trout with capers, cream cheese and pickled red onion (R45); smoked chicken and coleslaw (R40); and grilled fennel and leek (R35), as a vegetarian option. There are also plans to offer specials – like boerie bagels – and breakfast bagels with scrambled eggs and bacon with cream cheese, along with a sweet option.

In addition to plain, poppy seed and ‘everything’ (caramelised onion, garlic, caraway and poppy seeds) bagels, there is also a spelt option for those with food sensitivities. (Spelt contains gluten but as the proteins differ from those in conventional wheat flour, it is easier to digest and many people following a wheat-free diet find it perfectly digestible.)

It’s perhaps a little too early for a review, but thanks to its fortuitous proximity to the Eat Out offices, we can report that the fillings are indeed generous and indulgent and bagels slightly sweet and beautifully soft – a nice change from many other artisan sandwiches on offer on hard rolls. And if you’re thirsty, order some freshly squeezed juices on ice, or some great coffee by Rosetta.

25 August 2014: this article was edited to correct an error which suggested that spelt was a wheat-free option. It is however more suitable for those on a wheat-free diet.