“‘Beer, chips and pretzels’ came to me late one night after service over a beer,” explains Peter Tempelhoff, executive chef of The Collection by Liz McGrath, of which Greenhouse, at The Cellars-Hohenort Hotel, is part. “I wanted to create a dish that was a bridging course; a dish that contained both a little salt and sugar to get the taste buds ready for dessert.”

And so the idea of recreating the experience of sitting in a pub with friends, snacking on bar food, in a dessert was born. 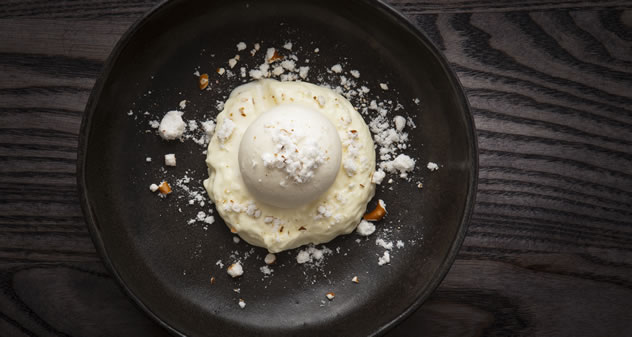 The Lay’s plain salted potato chips are made into a custard, which is then aerated for lightness. Devil’s Peak ale is reduced and made into a gelato, and the whole dish is sprinkled with a dusting of pretzels, which have been made into a praline before being crushed.

The custard starts out sweet, then turns subtly salty, and there’s an underlying hint of fried, golden potato. Salty, crunchy pieces of pretzel, and a scoop of bitter ale ice cream, balances everything out. It’s a remarkably moreish thing.

The interior at Greenhouse. Photo courtesy of the restaurant.

“It has been really well received because it’s so unique and also just so damn delicious,” admits Peter.

The course is part of a tasting menu, so you’ll have to save up a little to try it out. It’s available either as part of Greenhouse’s spring menu (R590 without wine) or the African origins menu (R820 without wine).

If you’re a fan of salty-sweet cominations, look out for the Dalewood Huguenot ice cream in the ‘Four degrees of cheese’ course. It’s so superlatively creamy, we’d order it by the bucket, if we could.

*8 September 2015: this article was edited to remove the assertion that the Lay’s plain salted dessert was an ice cream. It is in fact a custard.