Maybe it’s Gordon Ramsay’s fault, or maybe it’s just the stress of the kitchen, but chefs have a reputation as rough, tough, foul-mouthed humans. Have a gander at their Instagram feeds, however, and you might just notice a softer side. We chatted to some of the country’s top chefs to find out more about their four-legged friends. And yes, these dogs eat better than you do! (Psst: looking for dog-friendly restaurants? Check out our guide to 101 of them!)

1. Wesley Randles of The Shortmarket Club with Marvin and Bernie

Wesley Randles may be best known as the talented chef at The Shortmarket Club, but he’s also fairly famous for two terrific tattoos of his Boston terriers, Marvin (three) and Bernie (one).

“They go everywhere with us – even restaurants. You will find us at The Foodbarn almost every Sunday lunch. They only eat grass-fed beef from Frankie Fenner; we will never give them pellets. They eat better than we do most of the time. So yeah, we’re a bit dog-crazy.”

These Ts should be the standard uniform for the service industry this season. #dontbeadick @marvinbernie @thehouseofmachines A post shared by Wesley Randles (@wesleyrandles) on Dec 24, 2016 at 3:25am PST

(Marvin and Bernie, best be warned: We’ll be joining you for dinner soon.)

“Dogs! Literally my favourite subject after food,” exclaims the talented young chef when I contact her to find out about her French bulldog named Mash, short for Mash Potatoes. (Check him out on Instagram.) Mash accompanies Ash and her fiancé foraging for ingredients in Scarborough and Newlands Forest and reportedly has a penchant for beef marrow bones. “We always have them at the restaurant, so he gets a new one every few days. He lives on a diet of duck and butternut (I know), so he’s definitely got a little bit of foodie in him. We’ve got a bunch of herbs growing in our garden (basil, mint, parsley, rosemary, thyme etc.) that he nibbles at every day.”

Back when he was just a little potato @mashthefrenchie

He’s also familiar with his mom’s restaurant. “He was around for the whole building process of ASH and spent months padding around the rubble and getting his little paws covered in cement. Basically making the builders’ lives a little more difficult.”

Mash spends the day at daycare with Wes Randles’s two Boston terriers and Andy Fenner’s bulldog and rescue. (This is a party to which we would like to be invited, please. Thanks.)

3. Chris Erasmus of Foliage with Peppa, Mango, Spike and Muffin

When chef Chris Erasmus is not busy hunting with his longbow or dreaming up magical dishes from foraged Franschhoek flora and fauna, he is a devoted dog parent. “We struggled to get pregnant for six years, so decided to get a puppy,” explains Chris’s wife, Alisha Erasmus. The couple’s first Jack Russel, Chilli, recently passed away, but they still have a dog child named Peppa, also a Jack Russel, a cat called Muffin, who reportedly looks “like a pot of stew mixed with a bit of gremlin” and a Jack puppy, named Spike. They’ve also bred puppies and kittens. “At one stage, there were 13 Jack Russel puppies and six kittens, though still no actual human baby,” quips Alisha. Many human years later, the couple now have three dogs (they kept one puppy – Mango), one cat, and a beautiful seven-year-old human boy. 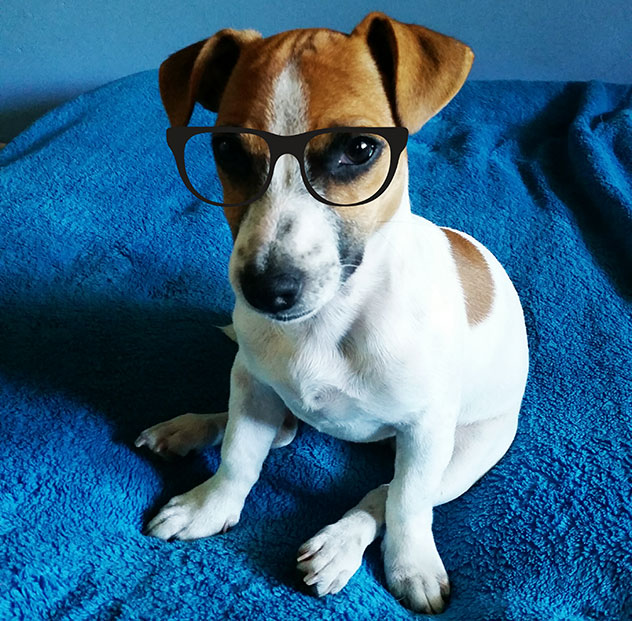 (Is it just me, or does anyone else want to be adopted into this family?) 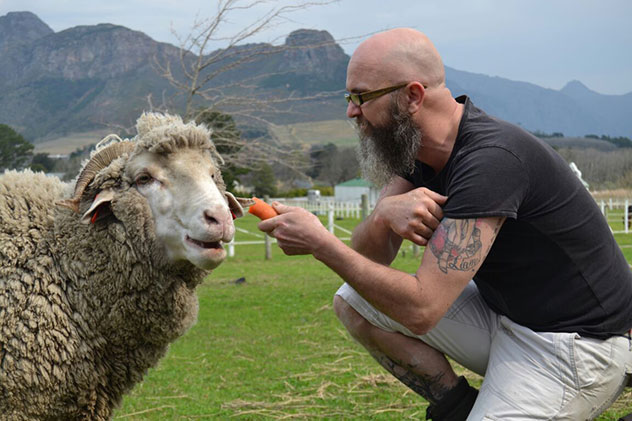 The chef at this Dunkeld West fine-dining restaurant serves up a pretty incredible degustation menu. But when he’s not pulling crazy hours in the kitchen, he’s the servant of a rescue pitbull named Kimchi. “She’s a goofball. Every day she steals more of my heart – even though she likes to hog the bed covers.”

This powerhouse chef couple is ably supported by Archie, a rescue dog from the SPCA. “When it comes to food, Archie is a bit of a snob,” says James. 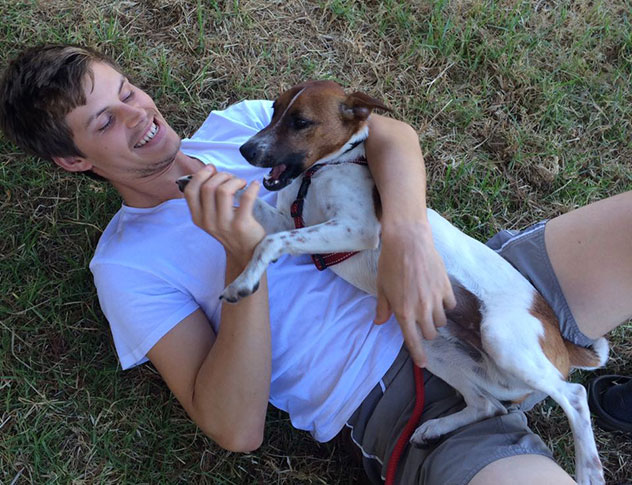 “Tracy has him on a strict raw food diet (gourmet dog mince) with rice and bran and fish oils. He has more snacks and treats in our cupboards and freezer than I do! He’ll eat anything his mom or dad are eating; his favourites are naartjies, apples, carrots and grapes, but he’s not mad about livers, mushrooms or courgettes – it must be a texture thing.” (We reckon there are quite a few kids – and some adults – on your side, Archie!) 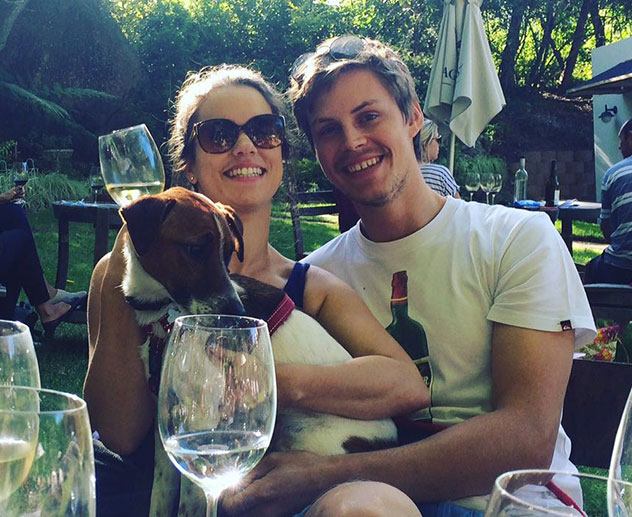 “It totally changed my life getting those dogs!” gushes this otherwise cool butcher. Follow Andy on Instagram and you’ll get a regular dose of baby bulldog shots. The new addition to the family? Pickle Bam Bam.

“The guy loves a camera,” explains Andy. “We have another lady of the house, Agnus. More commonly known as Goose.” Andy’s a big proponent of the healing power of dogs – especially in a gruelling service industry. “Both dogs bring a sense of perspective. Taking Agnus for a lap around Lion’s Head, for example, makes the stress of work seem way more manageable or less important. And after a long, shitty day, the healing power of a walk in the park is noticeable. It really does work. Other than my wife and family I have never loved anything more. We lost a dog once (Elvis) and it broke me. For me, they just force me to see work for what it is: part of life, not the definition of it.” 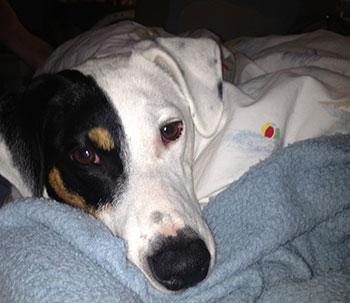 Eat Out editor Abigail Donnelly has a mixed-breed rescue from Wellington named Cassis. He was named for his big blackcurrant stain, but he perhaps the name has inspired a culinary streak in him. “He has such a sweet tooth,” says Abi. “He once ate an entire batch of cookies cooling in the kitchen and likes to sneak Matthew’s cheese puffs when he isn’t looking – often ending up with Matt (one of Abigail’s human children) in tears!”

8. Neill Anthony with Suki and Enoki

The celebrity chef has two toy French poodles called Suki (a Thai variant of hot pot) and Enoki  (a mushroom commonly used in Asian dishes), whom he adores. “The dogs eat raw food for breakfast and dinner. Trust me, they are as big fans of food as I am. They absolutely love the treats that I give them whilst I’m cooking. During the day whilst I’m attending to emails and not cooking, the three of us share popcorn, watermelon, cheese and sometimes a meaty treat. They are the best food friends in the whole world, always appreciative and happy to receive anything that my kitchen is ready to offer.” 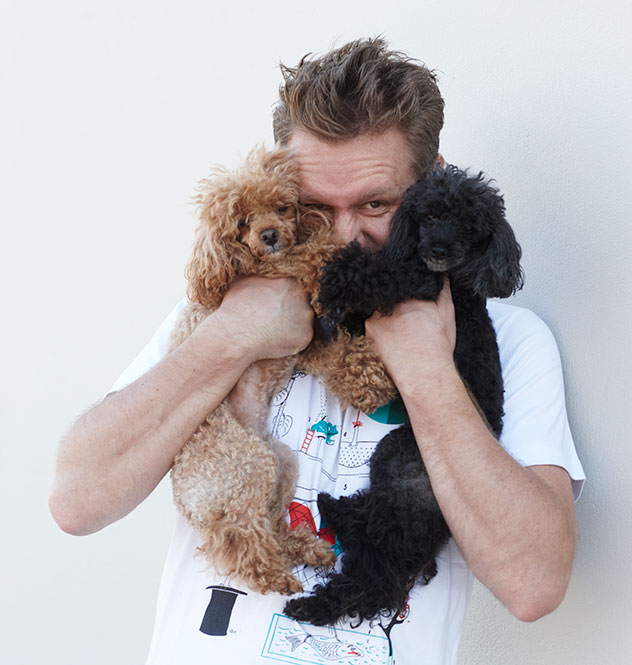 Bertus Basson is surely one of the busiest chefs in the country, but he and wife Mareli still find time for their magnificent four-legged family, including dogs Snoek, Patat and Bone, plus a pig named Spek. “We kept with the classical combinations, Snoek en Patat and Pork and Beans,” explains Mareli. Today, Spek and Bone have a restaurant named after them, and are apparently best friends in real life. 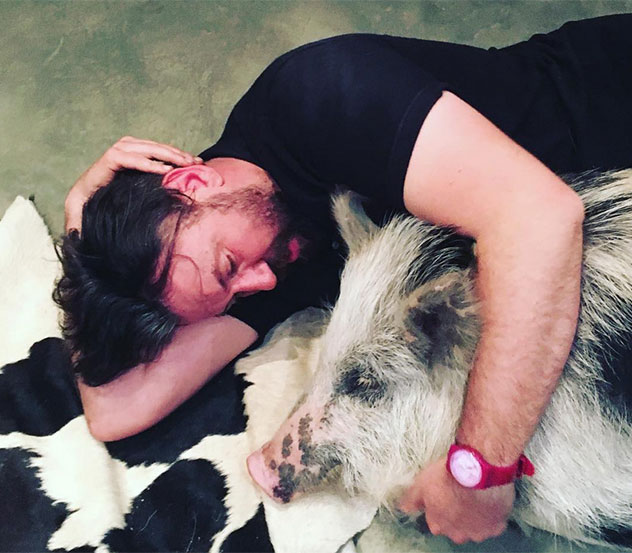 “They are all pretty spoilt! Spek sleeps on the couch and they all get morning cuddles in our bed. Our animals eat pretty well – the dogs are on a raw diet (organic chicken and veggies), and Spek gets a lot of veg offcuts when we make dinner. When Bertus feeds Spek he gets a garnished bowl with a spoon-drag of yogurt! Spek also loves acorns, which the staff at Spice Route pick for them. When Patat was the only dog he used to get steak offcuts from the restaurant. We often take the dogs for a walk in the vineyards behind our house in Stellenbosch and Patat and Spek enjoy trips to the Paradyskloof forest when we go forage for mushrooms in the winter. Bertus chats to Spek every day when he arrives home and talks to him about life. Spek also talks back.” 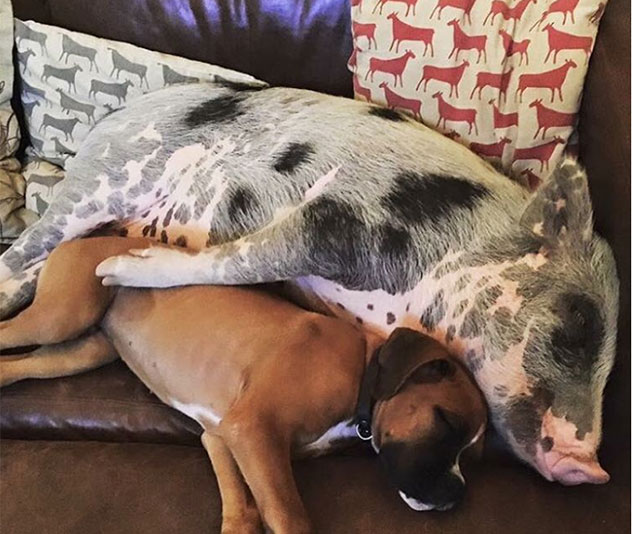 Though people often ask, the couple insist they will never eat their beloved pig. “Spek is only for loving, not eating! He is a highly intelligent animal and has shown us to be more careful about how much meat we eat and what meat we eat – rather eat the other bits than fillet so that less animals have to die in the process.”

10. Vanessa Marx of Culture Kitchen with Elli, Oliver and Shaggy 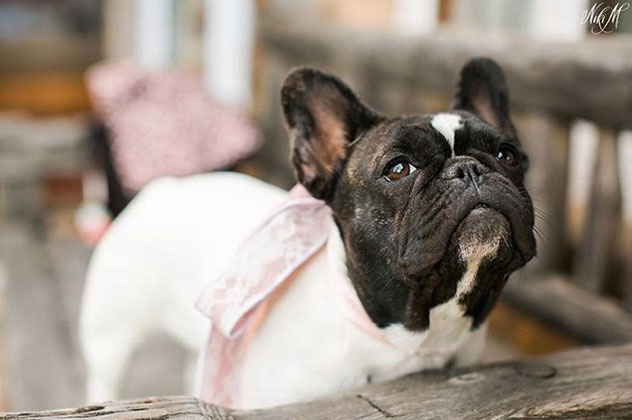 The former Savages and Dear Me chef now runs a food truck with her husband Mark called Culture Kitchen. The couple’s dogs are a huge part of their lives: Elli, a French bulldog, walked Vanessa down the aisle, while Shaggy, a rescued bearded shepherd, was the couple’s ring-bearer. Since then, Oliver, a boerboel rescue pup, who weighs in at a hefty 20kg at only four months old, has also joined the family. 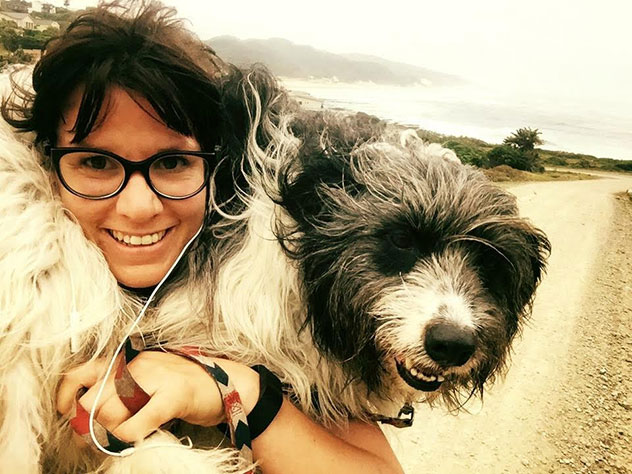 “Elli is my bestie and follows me everywhere; she won’t leave me for a minute,” says Vanessa. “She snorts like a little piggy so I call her Piggy sometimes. She will even sit on the edge of the bath and keep me company. Shaggy is obsessed with Mark and will barely take his eyes off him! He is very smart and barks on command when we tell him to ‘speak’! He also enjoys going for runs with me and chasing hadedas.” Literally the best.

If you’ve ever wandered down Bree Street during lunchtime, chances are you’ve seen a regal chocolate lab reclining outside Chefs Warehouse. So who is she? “Bailey is part of the Chefs Warehouse team. She is the meeter and greeter,” explains chef Liam Tomlin. “She comes to work with me every morning and spends her day been spoilt by the chefs and customers. She’s loved by everybody. She is the best,” says normally reserved Liam. Here’s Bailey officiating at an event at Chefs Warehouse Beau Constantia location:

12. Franck Dangereux of The Foodbarn with Vegas, Lola, Jet, Sadie, Blaze and basically a whole farmyard

Franck Dangereux’s enviable family includes four dogs – Vegas (a boxer), Lola (a boxer), Jet (a labrador) and Sadie (a staffie) – as well as five cats, three horses, a massive tortoise and countless chickens. The family also used to include Charlotte a glorious pig, who is sadly no longer with us. Here’s Franck with his 20 year old boy, Blaze. 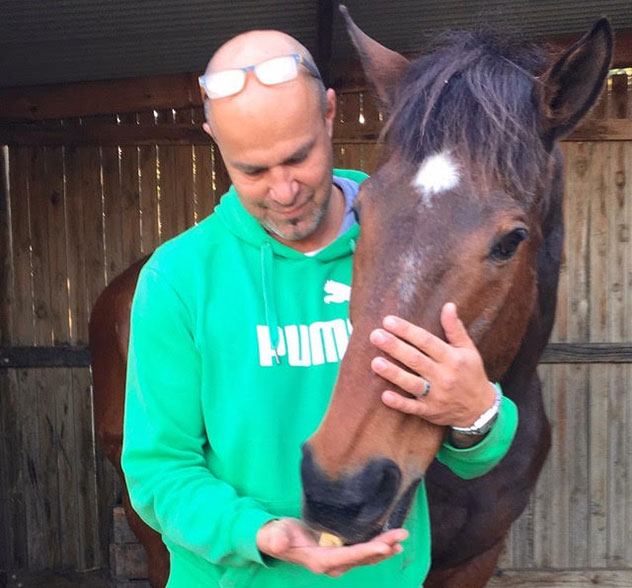 Blaze, one of Franck’s beloved horses, receives a treat.

Brought to you by Petley’s 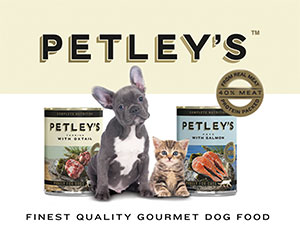 Petley’s is a gourmet cat food and dog food collection crafted as carefully and passionately as any chef designs their menus and meals. Petley’s believes in one pure thought: the best nutrition for your cat or dog starts with the best ingredients. Petley’s premium pet food is made according to a natural and slow-cooked recipe, with meat as the main, number-one ingredient and the focus on healthy proteins like chicken, fish, ostrich, lamb and oxtail. The Petley’s Gourmet Premium Collection is available in all major retail outlets nationally and from Takealot.