Ever since Chef Jan Hendrik van der Westhuizen was awarded his first Michelin star in 2016 for his restaurant in France, South Africans have been wondering if he would ever open a restaurant in his home country. And finally, in 2021, he did.

“I always knew I wanted to come home and I’ve always wanted to open a restaurant in South Africa,” he says. “But I didn’t want to do it in a big city where people would expect it to be. The first option would have been to have it on the farm that I grew up on, but Tswalu is the closest to that.”

Restaurant Klein JAN is located in one of the most remote areas of the Northern Cape, deep in the stark beauty of the semi-arid southern Kalahari at Tswalu, the largest private game reserve in South Africa, which covers 114,000 hectares. 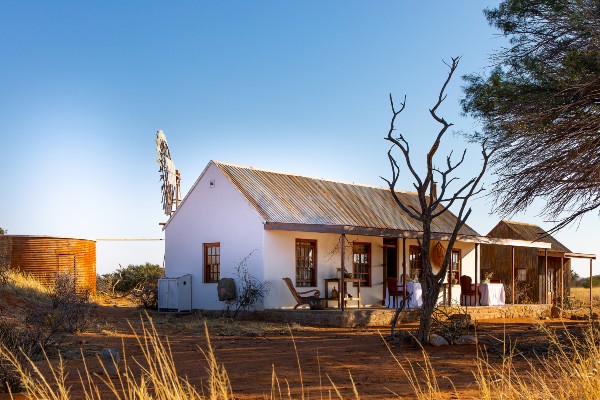 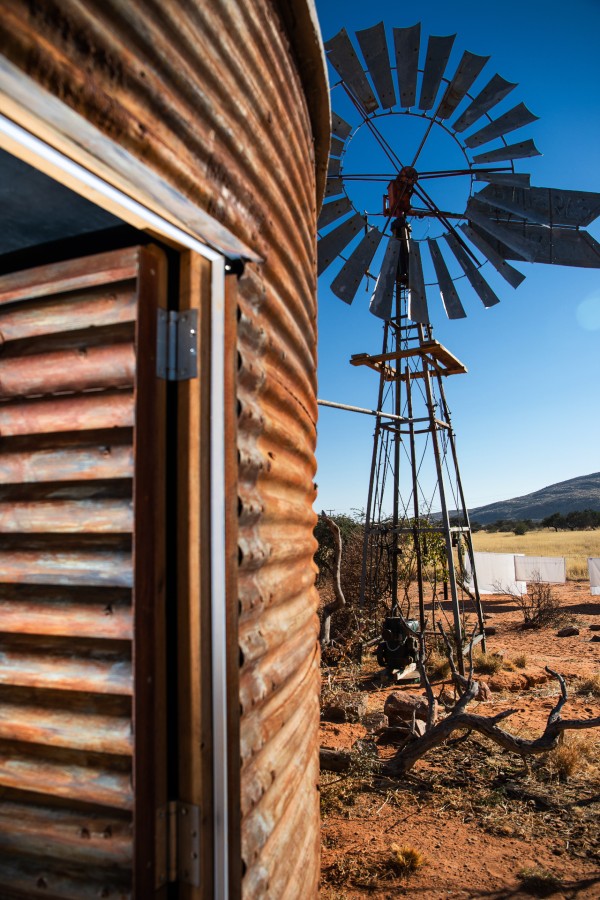 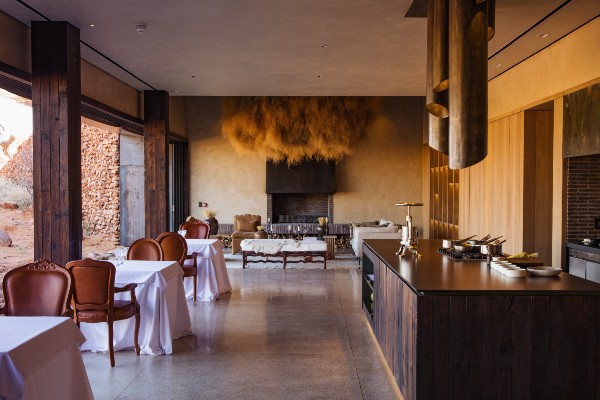 Jan says that conservation is Tswalu’s primary purpose; “to leave the world better than how we found it” encapsulates this vision. The countless layers of sand that were removed during construction even had to be carefully replaced so that the vegetation wasn’t disturbed. Inside the restaurant, much of the furniture is repurposed, such as the dining chairs, which are made from old Chardonnay wine barrels.

When it comes to the ingredients used, Jan and his team are starkly aware of the impact. “We can’t just go out and forage,” he says. “We are very limited to what we have and what we’re allowed to have.”

Native to the area are small, spiky springbok cucumbers and tsamma melons, which are a type of watermelon that hunter-gatherer San tribes would rely on for nutrition and hydration. The leaves of the melon can be cooked like spinach and its flesh can be dried and cooked into stews, while the seeds can be roasted or ground into flour.

Not far from Tswalu, lies the Hakskeen salt pan. Jan says his team use salt liberally in their cooking – both in fermentation and preservation methods – and he mentions that it’s going to play a much more interesting role. “We found salt crystals that were millions of years old and they are like diamonds. They’re so special. We always just assume that salt comes from the sea, but the salt in the Kalahari is just magnificent,” he muses. In the Kalahari, everyday ingredients are hard to come by and the restaurant only receives supplies once a week from Upington (a four-hour drive away), which means that the Klein JAN team have to think intensely about the menu.

“You have to look at the product as a whole; you don’t want to throw anything away. It requires another level of creativity and that’s how new ideas are born,” says the chef. The extreme temperatures were going to be a challenge for storing ingredients, which is where the restaurant’s iconic root cellar comes into play. Located four metres below ground, it allows Klein JAN’s environmental impact to be more sustainable. 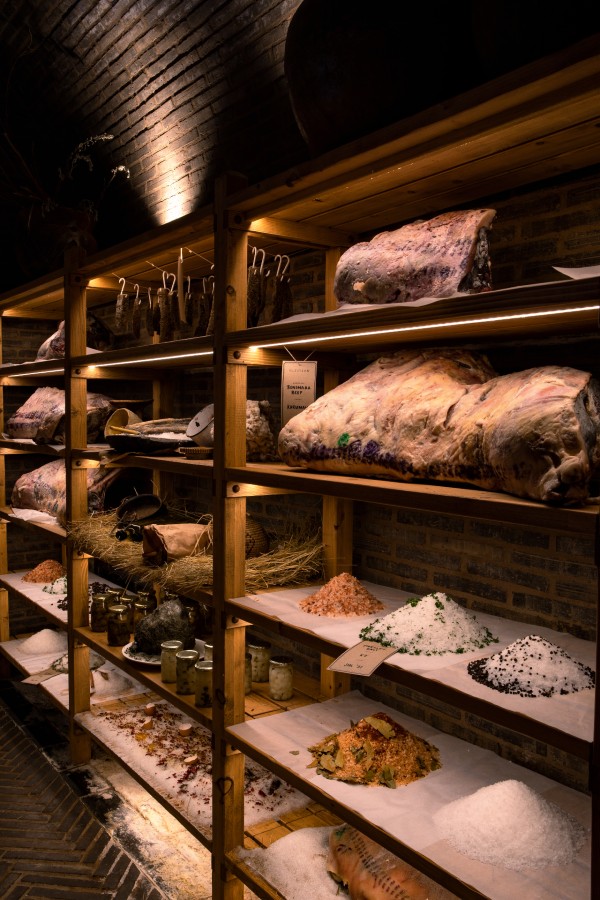 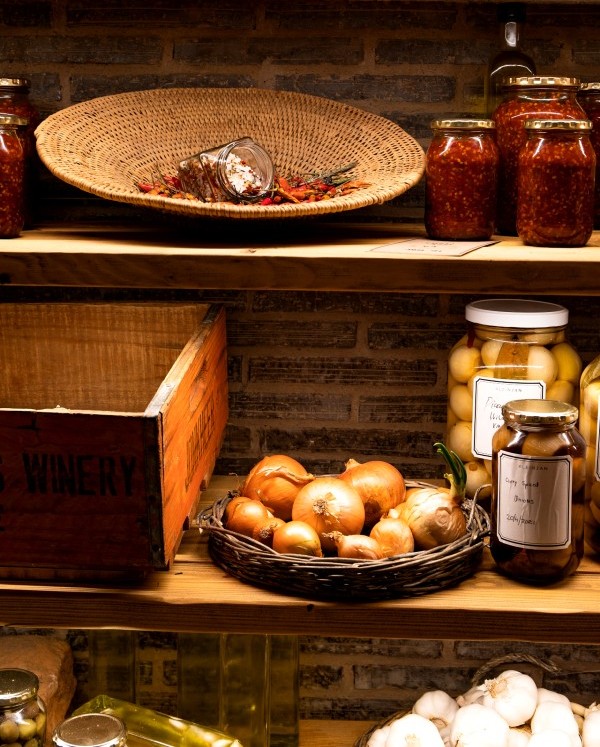 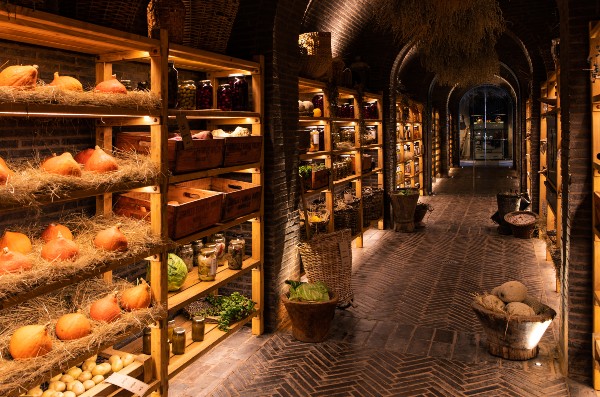 While it may be tough getting access to ingredients, Jan and his executive chef, Marnus Scholly, have happened upon a slew of Northern Cape locals that are producing extraordinary culinary gems – like the Senqu River pistachios that are harvested by Connie and Rina Coetzee at Wercon Boerdery on the banks of the Orange River. Locally reared meat is sourced from Tannie Dalene Nel of Upington Slaghuis, which has been operating since 1962. There’s also Tiaan Visser – a table grape farmer just outside Augrabies, whose small-scale artisan cheese hobby now sees him employing more hands to meet the demand for his wares at Klein JAN. Camel milk might be an unlikely ingredient to come across in South Africa, but Jan and Marnus were notified of a camel farmer in the area and they are using the milk in their milk tart and ice cream.

“Our approach with food will reflect the depth and simplicity of this land – that’s our goal for Klein JAN,” says the chef. 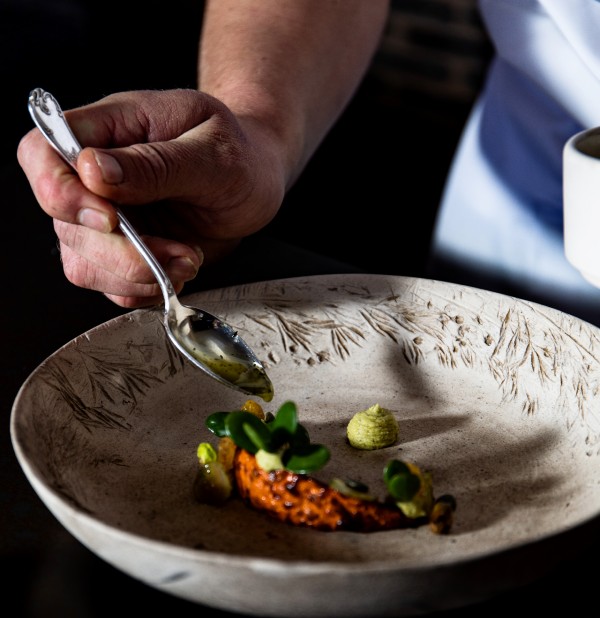 Opening a restaurant in the middle of a global pandemic is daunting for even the most experienced restaurateur and Jan says that his approach to food changed after the lockdown. “I feel the need to be grounded again. To move away from extravagant food and focus on what’s essential, to what is pared down and honest – that’s what I wish to achieve at Klein JAN with our menu and atmosphere.”

And it’s the atmosphere and ambience at Klein JAN that will be imprinted on the memories of every guest who walks through the door of Boscia House, the 100-year-old farmhouse that sets the scene of your arrival at the restaurant. “It’s that kind of care you get from your granny. Times I will always remember, which I want to capture at Klein JAN.” 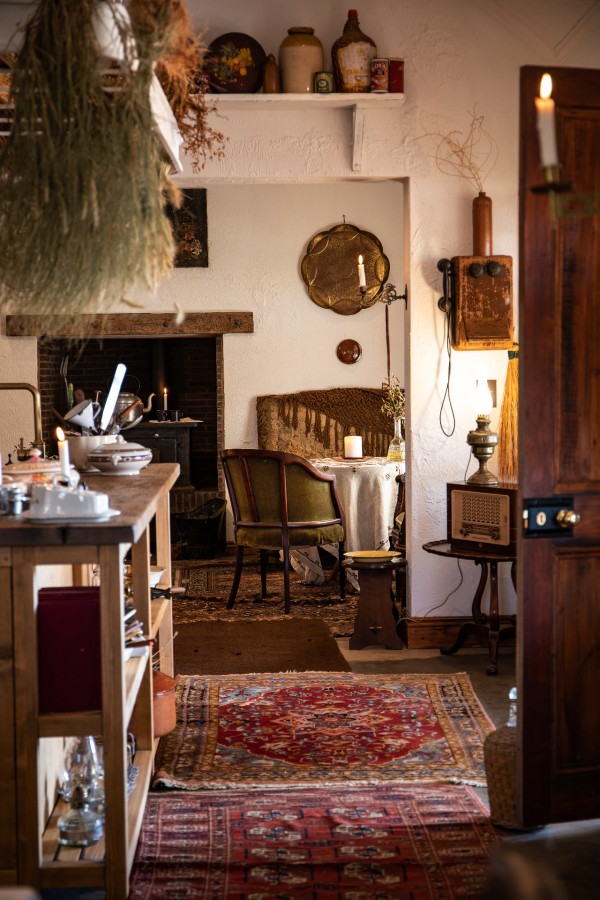 Anyone familiar with Jan Hendrik’s aesthetic knows that contrast plays a major role in everything he does and visual language is his way of communicating ideas. “The first thing I did was put the blue of the French Riviera next to the red of the Kalahari and I could see the extremes of these two environments. The contradictions literally offer a message, a concept that is not opposing to the other, but rather it reminds you how separate the two are, and I love that. It’s the same with the contrast we have between Jan and Maria in Nice.”

This was the starting point for what would become Klein JAN. A restaurant unlike anyone had ever seen or experienced. But how does one create something new and unique that isn’t somehow connected or influenced by existing ideas? Jan says he believes it takes a restaurant at least two years to build up an identity or a palate of signature dishes and he thinks that is where most chefs get it wrong. “They immediately go in and copy the rest of the world, assuming that it’s original or that it will become original, but they don’t allow themselves time to just develop. The food needs to have a unique identity; capturing who you are and where you are.” 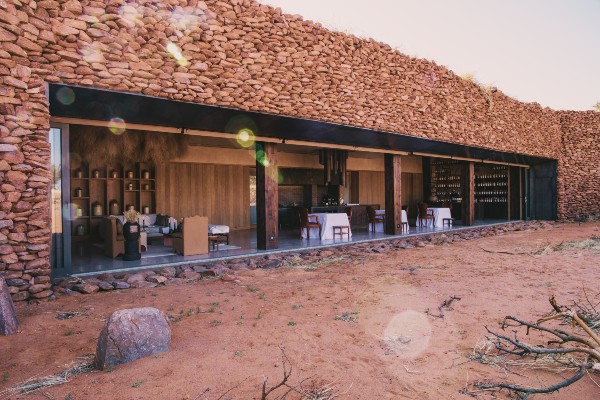 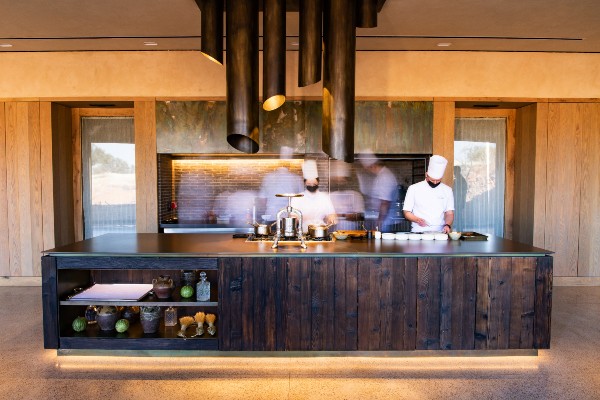 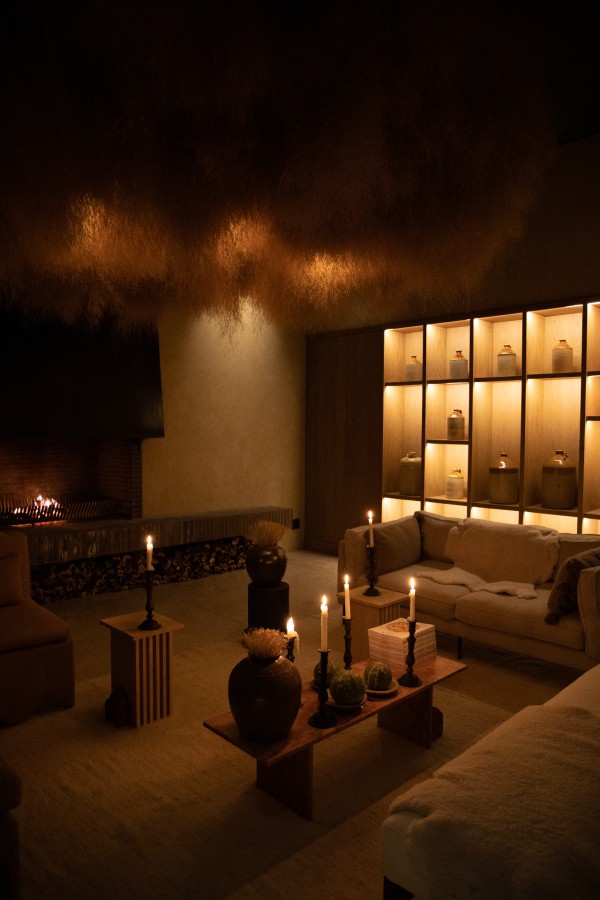 While many restaurateurs and chefs put emphasis on the food being served, Jan believes his team are central to everything. “The people are the heart of the restaurant,” he says emphatically. “We see our staff as a tribe. They are four hours away from the nearest town, so the type of person who works at Klein JAN really wants to be here. They are so motivated, and it’s refreshing. It doesn’t feel like they are working, it feels like they’re having a party and they’ve invited some guests over.”

During COVID-19, many chefs were reminded that the restaurant industry is a tough one to be in and, when pondering the future of dining, Jan Hendrik says that visiting a restaurant post-pandemic will not be just about the food but about the full experience, one that heightens your senses.

“It can be as simple as being out in your backyard with a beautiful tablecloth and a candle. There’s been so much time spent focusing on the food that we have neglected everything else in terms of the physical experience of getting to each bite. It’s going to be about the journey to taste. That to me is the future.” 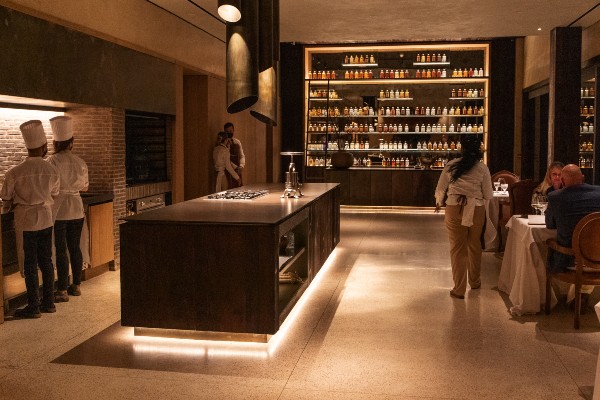 Restaurant Klein JAN is open to non-resident guests for lunch, subject to availability on specific dates. Reservations for the lunch service open three months in advance, while in-house guests are invited to experience one meal at the restaurant during their stay.