Meet the producers (and goats) of Anysbos Cheese in Botrivier

This year’s SA Cheese Festival will be held from Saturday 26 April to Tuesday 29 April 2014 at Sandringham outside Stellenbosch. (We’re giving away double tickets!) A special area will be set up for small, independent cheese producers, allowing visitors to interact with and learn from the experts. Amongst them will be Sue and Johan Heyns of Anysbos in Botrivier, who were nominated for the 2014 Eat Out Zonnebloem Produce Awards in the dairy category. 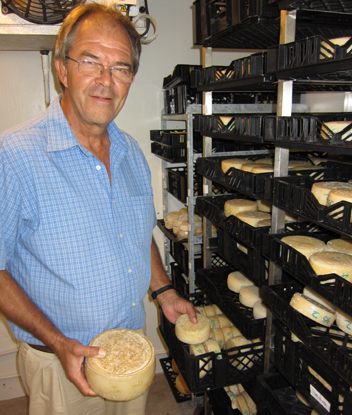 Anysbos: A bit of background

Johan’s always been a farmer at heart, but without a farm. He calls this his third career: first a lawyer, then a filmmaker and now a farmer. Sue’s from the IT industry; her knowledge of computers and what can be done with them on a farm is a huge help.

“We were always going to move to a farm when we retired,” explains Sue. “We had been looking in the Overberg, when what eventually became Anysbos was put on the market in 2008. It was the right place, plus it was next to Johan’s brother’s farm, Gabriëlskloof, in the Bot Rivier Valley.

The couple started experimenting with cheese years ago. “When still in Johannesburg we bought a little cheese vat and started playing, subjecting our friends and family to our creative efforts. Luckily, they are honest and less polite than most, and told us what they thought.”

Today, the couple, along with their cheesemaker Annie Christensen, produce goat’s milk cheese of high quality. They share a little slice of their (cheese) life with us.

Why did you choose to work with goat’s milk?

We had to find something new and challenging, something to keep us busy and off the stoep. The farm has relatively little water, so the first priority is the olives and grapes. But Johan wanted to farm with living things that produce something, and the relatively small goat herd does not need too much water.

Goats have character: they play, they can be indignant, insulted, full of sh*t and so over the top. Prima donnas! We love them.

Another reason that appeals to us semi-retired folk is that the goats don’t give milk during winter. This natural break will allow us to get away, go visit the children and grandchildren, or go on holiday.

What kind of goats do you have? Why did you select this breed?

We have mostly Toggenburgs; there are also some Alpines and Saanens. (We started with 22 in 2010 and now have 75, and are currently milking 41 of them.) The Toggies are very even-tempered and easy to work with, their milk has the ‘softest’ flavour, and they probably have the best mammaries of all the milk goats. They live longer, so give more milk over a longer period and have fewer problems with things like mastitis – and they’re not bad looking either.

What training did you have in cheese making?

We attended courses at the Grootplaas De Rust Cheese Academy, under the tutelage of Hans Keller. And then there are those two masters of teaching: trial and error. But mostly we’ve learnt from Annie Christensen, our cheesemaker. We’re still learning; it’s an ongoing process.

Where are your products available?

What is your star product?

We’d say our caprino, which is a pecorino-style, medium-hard cheese. Annie started making it when she joined us. It’s nice and balanced with subtle lingering flavours. 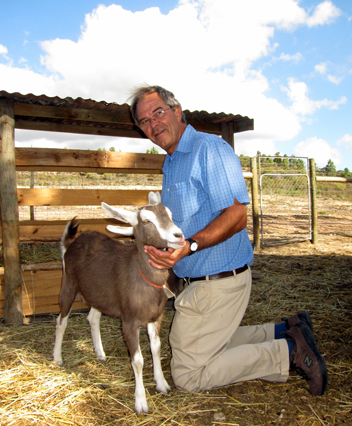 What are your joys and frustrations?

Initially it was a bit of a nightmare. When we first arrived at the farm we had no milking parlour, so we were milking out in the open. It was muddy, wet, cold and messy. And most of these goats had never been milked before! (That’s where names like ‘Duiwel’, ‘Springer’ and ‘Skop’ come from.)

The basic frustration is lack of experience. A goat gets sick and it’s off to the vet; forcing an abandoned kid to drink from a bottle; sitting on your backside in the rain, covered in goat’s dinges. Then there’s finding a routine that works for you and the goats; and finding people that have an affinity for these pesky creatures. Goats like to open gates and they love young olive trees.

But the joys are many: The arrival of the first kids; seeing the young ones grow; the gentle nibble on your shirt by Gemmer, Stertjie or Marmite. Today they’re small; tomorrow they’ll be mothers, giving milk.

We also have to get up early to start the day, talk to the workers, give a hand with the milking, check production and start the pasteurising. We love sharing the cheese with friends or family, and, of course, the fact that people actually buy the stuff!

And lastly, for some strange, primitive reason, cutting the curd is also a highlight. It almost feels like Moses who split the Red Sea. It’s really a special moment: the start of what will become caprino or camembert – or something that has to go to the pigs.