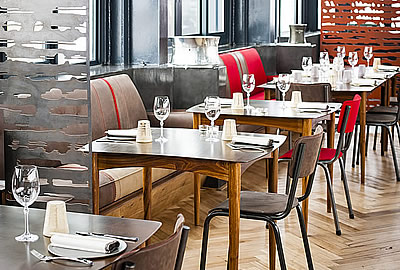 “Fun, adventurous, handmade, heavily textured, with ‘Fifties elements…” were key words for Luke Dale Roberts when it came to masterminding his latest – and highest – venue yet, the hyper-sexy rooftop restaurant known as The Pot Luck Club. Choosing local artisans and craftsmen who could best fulfill his vision, Luke created a new venue that extends the look and feel of his original restaurant, The Test Kitchen, but has a lighter approach. One that is more suited to the Asian tapas-style food served there, and one that won him the Boschendal Style Award at the 2013 Eat Out DStv Food Network Restaurant Awards. 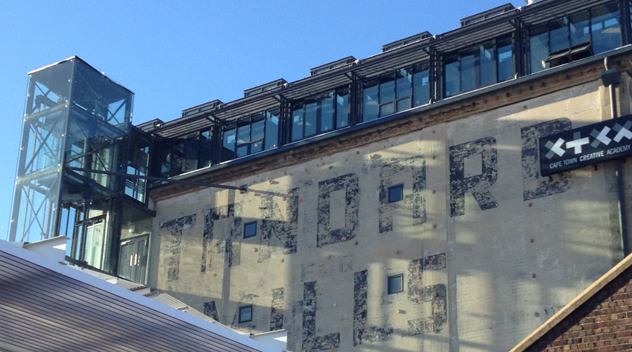 For the first time visitor, the most striking element about The Pot Luck Club is its location. Perched atop an historic silo, which was originally used to store grain and flour, the restaurant has 360 degree views of the city. The silo was built in 1914 by the Pyotts family and was part of their biscuit factory located there. For the past few decades it has been abandoned – with no use other than that of historical industrial landmark. It was architect Kristof Basson who undertook the challenge of converting the rooftop into a contemporary destination whilst taking the historical nature of the existing building into consideration.

“All new work was done in a different material (steel and glass) to differentiate between the two,” Kristof explains. “It is our [practice’s] vision that new work should not be hidden, but should be seen as a new layer that is added to the historical layer by the current generation.”

To reference the past, Basson positioned the new steel support struts at intervals that echo the original placement of the separate silos within the tower. The rest of the space is glass – allowing for some of the best views in the city.

Of course, working with such a striking location comes with its own challenges. “When I first looked at the space my initial concerns were that it was quite cavernous and there was a lot of glass and aluminium, which can be quite corporate,” Luke says.

To help tackle these challenges, Luke commissioned Greg Scot of Greg Wright Architects for the interior layout. Greg “brought the whole project together and did the complete plan and helped with the wooden floors, counters, flow and conceptualisation of the design,” Luke explains.

An earthy colour palette, punctuated by splashes of red, creates a warm environment, while an edited selection of contemporary local design references the past without being overly nostalgic. Natural hues, different shades of woods, tarnished metals, and materials that are untreated and unprocessed – all of Luke’s favourite design elements – also serve to create a relaxed and calming dining environment that is stylish and sophisticated, but veers away from pretension. 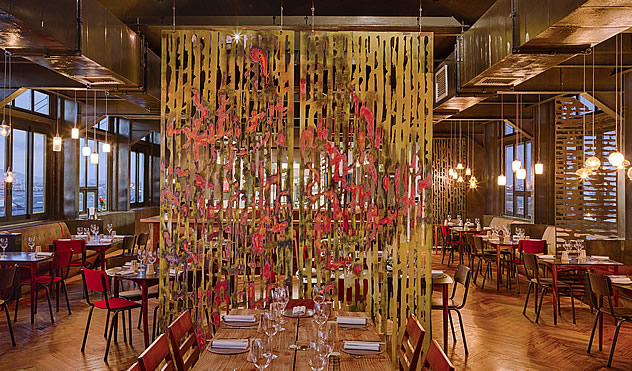 Furniture was also chosen to work around all the glass in order to enhance and accommodate the vistas, and to soften the effect of the steel. Simple, lightweight metal-top tables with kiaat legs were created by Casamento based on an original idea by James B Hannah used for The Test Kitchen.

Low booth seating by Casamento lines the section below the windows, and combines textures of brown wool and leather, with slashes of red felt and red twine graphic stitching. “Luke loves our Gambler sofa which is a very ’50’s shape,” says Eve Collett. “I adapted it to become a built-in bench.”

It was Luke’s wife Sandalene Miyabi who sourced the rest of the seating and came up with the playful idea of upholstering classic metal school chairs using the same leather and felt. The reinvented school chairs have a minimal structure and fairly low backs.

Salvage chic is again evident in the lighting scheme, which consists of clustered ‘chandeliers’ made up of a variety of dainty retro lampshades, sourced by Luke from various antique shops. “I wanted to use some vintage stuff as this would assist along with the wooden floor and upholstery to soften the space”.By day these lampshades add character, by night they lend a twinkly halo that echoes the lights of the cityscape below.

Luke is also a lover and supporter of South African design and this is strongly reflected in the interior, where he included the work of many Cape Town-based designers, including Peter Eastman, Egon Tania and Bronze Age, Laurence Friedman from Truly Fantastic and Imiso ceramics.

“I had seen the amazing cobbled work that Egon Tania had done at Bronze Age and I wanted the first impression upon walking in to be that of a cobbled street,” Luke explains. “My friend Peter Eastman showed me some amazing pictures of manhole covers that are artistically done in Japan.” It was Otto du Plessis at Bronze Age and his team who created the cover.

“Luke always keeps it local, that is one of his strengths,” comments  Eve from Casamento. “He also allows artisans to express themselves quite freely. He is highly respected in the Cape Town design community – he has us really going the extra mile, and his enthusiasm and creative vision is totally infectious.”

Thanks to Luke’s hands-on involvement in the design process, the Pot Luck Club interiors evolved organically, with all participating designers and suppliers being actively involved in bringing their particular element in tune with his overall vision. In essence, this honours the original notion of “pot luck” where each participant in a dinner party would bring a delectable dish to add to the overall feast.

Check out the other four restaurants that made the shortlist for this year’s Boschendal Style Award, plus the full list of nominees.