The Eat Out S. Pellegrino Chef of the Year Award: the lowdown 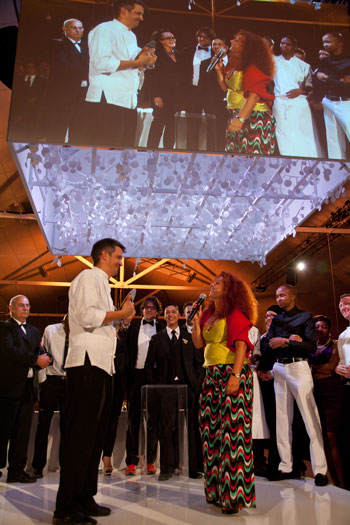 The reigning Eat Out S. Pellegrino Chef of the Year, David Higgs of Five Hundred at The Saxon.

The 2014 winner of the Eat Out S. Pellegrino Chef of the Year Award will be announced at the glitzy award ceremony on 16 November. Ahead of the announcement, we bring you the lowdown on the criteria, the award and the prize on offer.

The winner is a chef that’s leading the pack in South Africa. Someone that young people in the industry can look up to and dream of emulating one day. Of course innovation and bravery are important. Hard work, sheer devotion to the craft of cooking, and the commitment to take food – and the restaurant – as far as possible are also important. Chefs deserving of this award are always striving, pushing boundaries – and crucially – taking their teams with them on the journey.

The winner of the 2014 Eat Out S. Pellegrino Chef of the Year Award will be afforded the opportunity to take part in the Chef’s Cup SüdTirol in Alta Badia, Italy, in January 2015. This annual event brings together 70 renowned chefs from Italy and the best international restaurants to cook, share ideas and compete in events.

The reigning Eat Out S. Pellegrino Chef of the Year

Announced at the Restaurant Awards in 2013, the reigning Eat Out S. Pellegrino Chef of the Year is David Higgs of Five Hundred at The Saxon . “Every piece of him translates to the eating experience,” said chief judge Abigail Donnelly, at the time. “David is never complacent, showing not only talent and dedication to his craft, but also innovation: his work continues to evolve. He pushes the boundaries of South African cooking and promotes it across the world,” says Abigail.

In addition to pushing boundaries in his own kitchen, David has served as a mentor for several young chefs. Outside the world of fine food, David has demonstrated his commitment to food security as a whole in this country, with the launch of his very own charitable project, FoodCycle.

S. Pellegrino began in 1899, when the Società Anonima delle Terme di San Pellegrino, owner of the thermal spring of the same name, first bottled its water for sale. Since then, S.Pellegrino has become one of the world’s best known and most enjoyed Italian products because of its image and unmistakable taste, but also because of the excellent quality. Served at some of the best restaurants in the world, it is a brand that stands for togetherness, bonding around food and sharing.